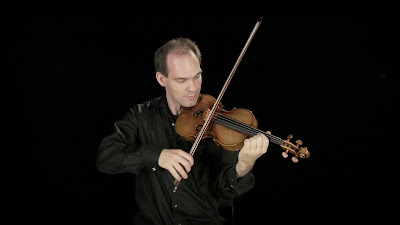 This morning, in the Book of Mark, one thing really stands out to me. It is the power of the Master's Touch. How powerfully lives were changed by the Touch of the Master's Hand. And as I pondered this, I thought of the poem about the old violin. I'd like to share it with you this morning.

'Twas battered and scarred,
And the auctioneer thought it
hardly worth his while
To waste his time on the old violin,
but he held it up with a smile.

"What am I bid, good people", he cried,
"Who starts the bidding for me?"

"One dollar, one dollar, Do I hear two?"
"Two dollars, who makes it three?"
"Three dollars once, three dollars twice, going for three,"
But, No,

From the room far back a gray bearded man
Came forward and picked up the bow,
Then wiping the dust from the old violin
And tightening up the strings,
He played a melody, pure and sweet
As sweet as the angel sings.

The music ceased and the auctioneer
With a voice that was quiet and low,
Said "What now am I bid for this old violin?"
As he held it aloft with its' bow.

The audience cheered,
But some of them cried,
"We just don't understand."
"What changed its' worth?"
Swift came the reply.
"The Touch of the Masters Hand."

"And many a man with life out of tune
All battered and bruised with hardship
Is auctioned cheap to a thoughtless crowd
Much like that old violin
A mess of pottage, a glass of wine,
A game and he travels on.

He is going once, he is going twice,
He is going and almost gone.
But the Master comes,
And the foolish crowd never can quite understand,
The worth of a soul and the change that is wrought
By the Touch of the Masters' Hand.

The Touch of the Master's Hand is a classic poem by Myra 'Brooks' Welch. It speaks of the worth of the soul. Hope you are blessed by this song based on the poem and sung by Wayne Watson.

How about you? Have you experienced the transforming power of the Master's Touch? Why not ask for it today?
at June 21, 2017 No comments: