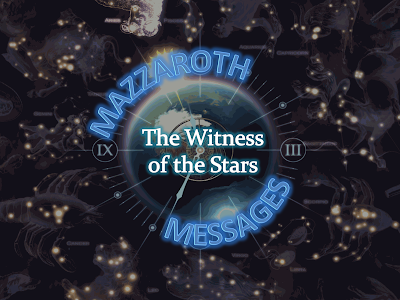 We have, at last, reached my favorite part of the Book of Job - the part where God speaks! Job chapter 38 is a veritable gold mine of key points demonstrating the almighty power and wonder of God.

For today, I would like to focus upon some verses from Job 38 which are on the subject of the stars and constellations, all of which are known as the Mazzaroth. This is not to be mistaken for astrology (Deuteronomy 18:9-14, Deuteronomy 4:14-19)! In fact, astrology is the devil's counterfeit - his attempt to silence to the true Message of God, found in the original star and constellation names and shapes. But the devil can't have the stars! He didn't create them! And he didn't have the right to give them different names than those given by God Himself. God reveals to Job that it is He - the Creator of the universe - who controls the heavenly bodies, establishing the "ordinances of heaven":


Job 38: 31-33 "Canst thou bind the sweet influences of Pleiades, or loose the bands of Orion? Canst thou bring forth Mazzaroth in his season? Or canst thou guide Arcturus with his sons? Knowest thou the ordinances of heaven? Canst thou set the dominion thereof in the earth?"

This morning, I would like to share with you some of the Creator's wonders, demonstrated in the Mazzaroth. The following is from my Mazzaroth Messages DVD series - part 1. Did you know that God is preaching in the heavens? God uses the heavenly bodies to teach mankind about His glory. The stars are speaking in a way which transcends all language and cultural barriers. And the heavens do declare the glory of God (Psalm 136:1-9):


Psalm 19:1-3  "...The heavens declare the glory of God; and the firmament showeth His handiwork. Day unto day uttereth speech, and night unto night showeth knowledge. There is no speech nor language, where their voice is not heard."

• What is the purpose of the heavenly lights?


• When did the stars appear?


• When did the constellations appear?


• Who designed the shapes and messages of the constellations?


• When and by whom did the stars and constellations receive their names?

Let's go one-by-one through these questions and Scripturally answer them.

1) What is the purpose of the heavenly lights? 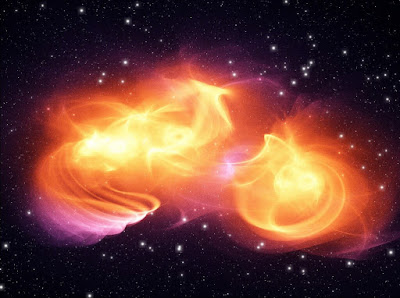 Obviously, the heavenly lights are beautiful. They certainly show the creative power of God through their dazzling, celestial displays. But there is much more to the message than just breathtaking beauty.

In Genesis 1:14-15, we find several reasons for which God created the heavenly lights:

There are seven reasons why God created the heavenly bodies:

1) They divide the day from the night - the sun lights the day, and the moon and stars shine at night.

3) The sun, moon, and stars were created to herald God's "seasons". The word "seasons" is the same word which is translated as "feasts" in Leviticus chapter 23. God uses the heavenly lights to determining the timing of His holy Days.

4) The heavenly lights determine the length of a day.

5) The heavenly lights determine the length of a year. They also show when a year begins and when it ends.... which is a whole huge subject that I won't get into now. But if you're interested, you can follow this link.

6) The heavenly lights were created to light the heavens.

7) The heavenly lights were created to give light upon the earth.

The heavenly lights were obviously made for much more than just beauty. The Psalmist tells us plainly, that they are speaking about God's righteousness. 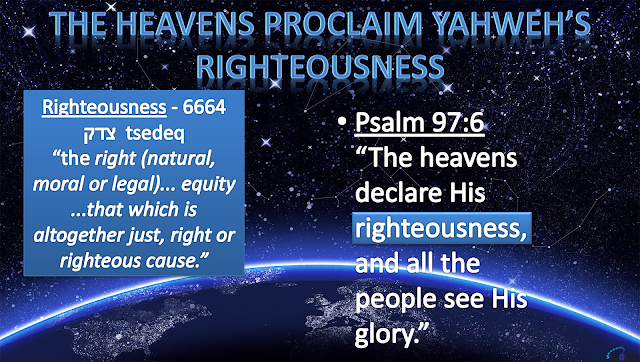 By looking up the word "righteousness", we find that the heavens are declaring what God deems "right". They are also portraying what is moral or legal - which is a suggestion that the heavenly bodies have something to reveal about the Law of God.

Before we can touch on any of that, we need to start of with some basics of biblical astronomy. First, God created the heavens upon a visual "cord", which is the "tabernacle" (house or dwelling place) of the sun. In other words, God made the sun to stay in a part of the heavens, which is visually marked out in a straight line. Here are the verses which teach this: 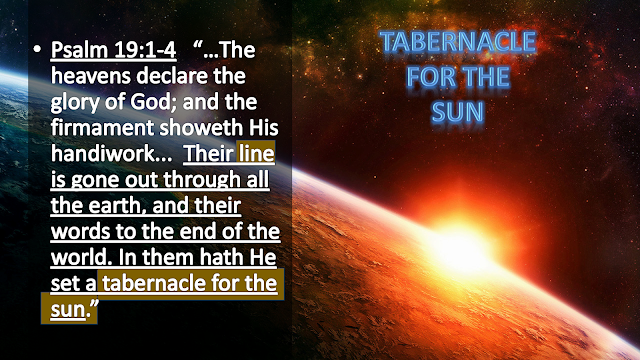 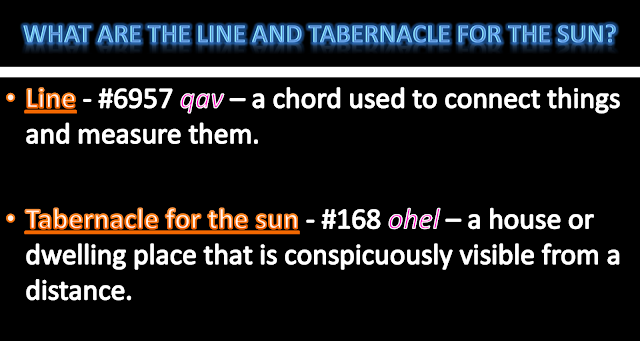 Astronomy calls the Bible's "tabernacle for the sun" the ecliptic path (the red line in the following image). 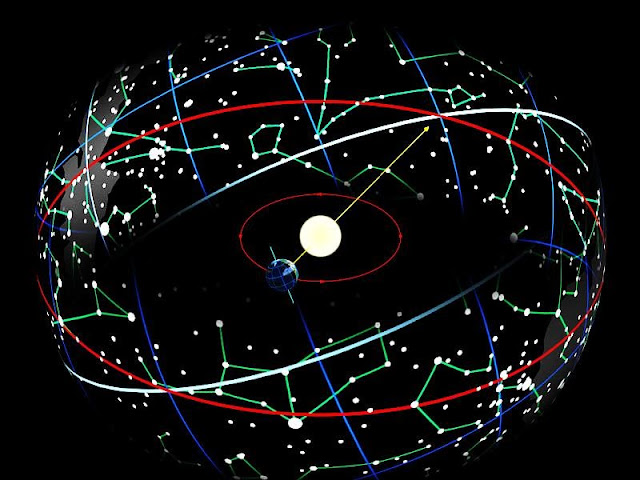 The ecliptic path is the line the sun appears to visually pass through as the earth moves around the sun in one year. During its visual pass through the sky (the sun doesn't actually move, it is the earth which is moving), the sun appears in 12 constellations, which are known as the "cardinal constellations". These 12 constellations in their shapes and original star names portray the gospel message, and are the same messages which are represented in the tribal ensigns (banners) of the 12 tribes of Israel! And this is just some of the prophetic message God is proclaiming in the stars.

That brings us to our second question from the list above. The answer may seem obvious, but bear with me...

2) When did the stars appear? 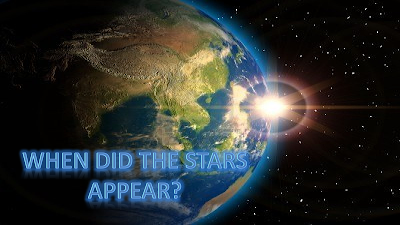 First, we know that God created the starry host by His Word and by His Breath, as it says in Psalm 33:6. Also, in Genesis, in the account of Creation, we can find that God created the heavenly bodies - including the sun, moon, and stars - on the fourth day of the Creation Week: 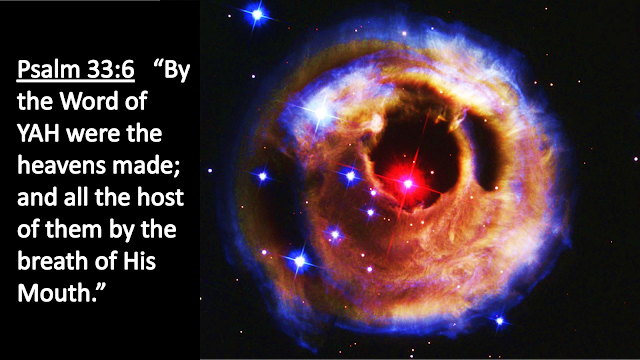 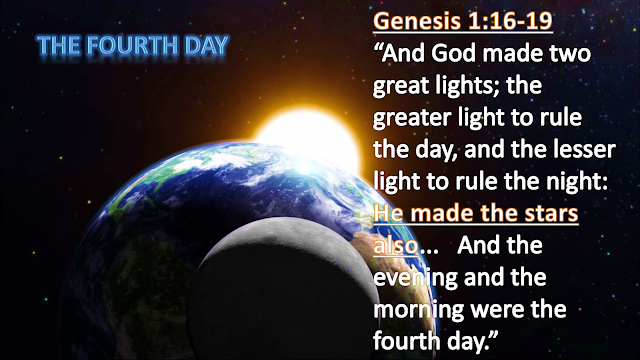 3) When did the constellations appear? Who shaped them, named them, and gave them their meanings?

While it is fairly obvious that God created the heavenly bodies on the fourth day of Creation, according to the Bible, the answer to this third question is not so obvious. The constellations were formed after the Fall of mankind, into sin. The stars tell the Plan of Redemption - and God did not predestine man to Fall. He was not telling Adam every night in the sky that he would soon mess up! Rather, there is historical evidence to show that the redemptive message of the stars was given after Adam and Eve fell...  in the time of Enoch. 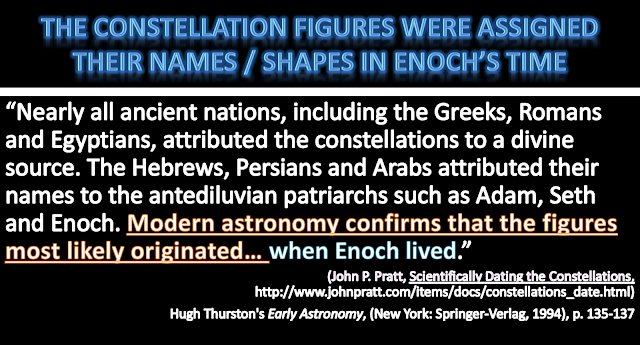 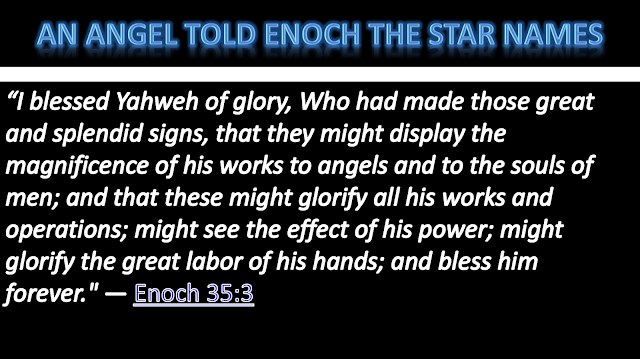 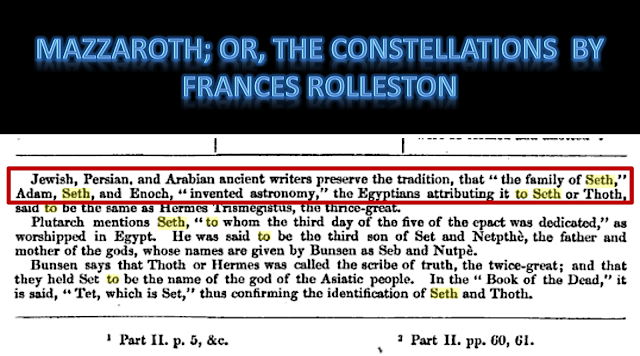 Scripture is also clear that God Himself named the stars and it was He Who formed the constellation shapes and assigned their meanings. 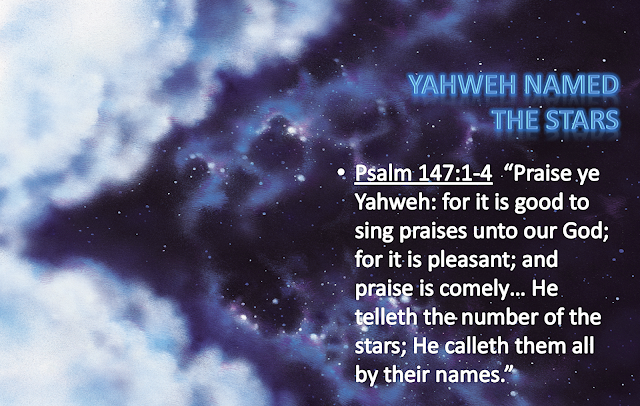 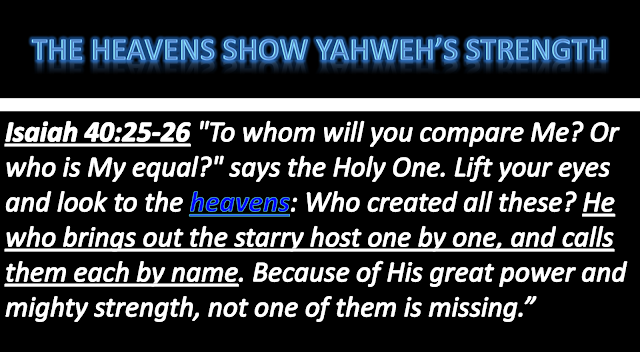 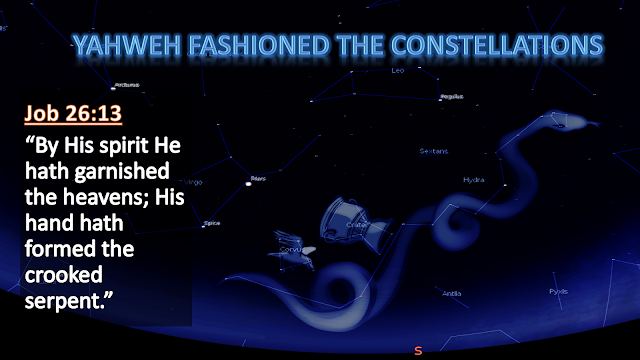 God was very specific in His heavenly revelations. The stars, as well as the Bible, foretell the coming Day of God's Wrath. This is one reason why the wicked are "without excuse" on the Day of Judgment. God has amply forewarned all. And if a regular person like me can find the original star names, than certainly the great theologians and scientists of this earth can find them! 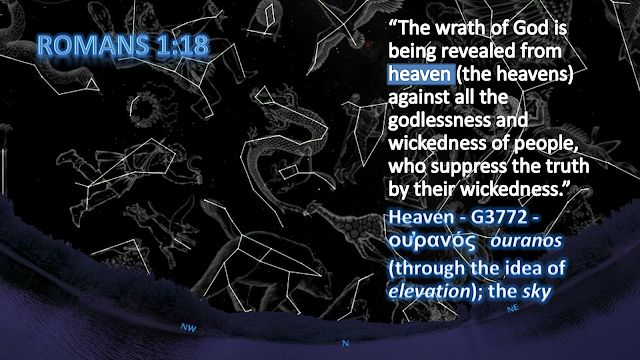 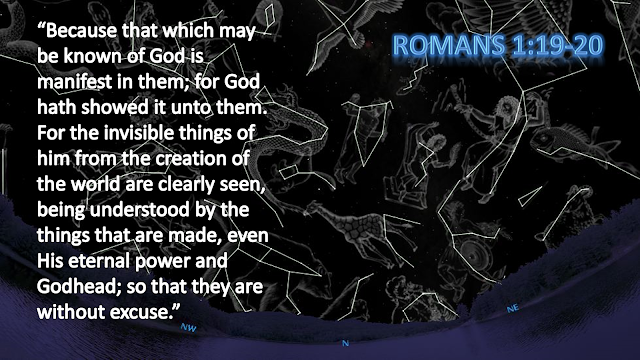 History records that there were 48 constellations in the original set, which were given and named by God. Ptolemy listed 48, and the Persians-a few hundred years later-also list 48.

Ancient writers agree that there were twelve in the region of sky where the sun and planets all appear to move. Those twelve were originally called the Mazzaroth, as we saw in the book of Job today. The Egyptians and Persians both recorded that each of these twelve "cardinal constellations" had three associated constellations called "decans," bringing the total of original constellations to 48.

Whereas little work has been done on understanding the Egyptian set, we have a list of all 48 constellations from the Persians, including how they are divided into decans.
Albumazar, in about AD 850, constructed the Persian list of 48 original constellations.

From these, as is amply explained in my DVD series Mazzaroth Messages, the heavens do declare the glory of God.

In conclusion today, I leave you with the powerful words of God to Job: 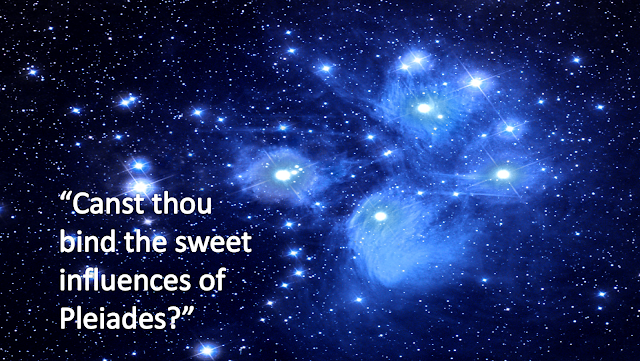 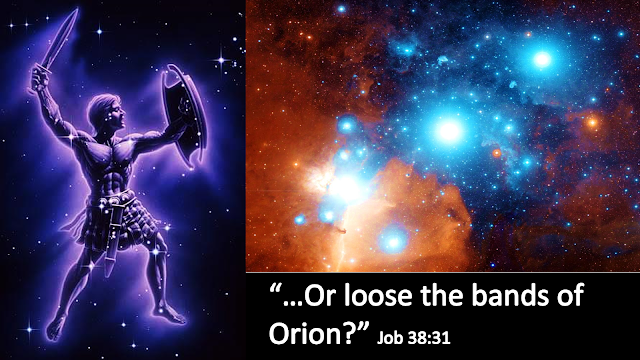 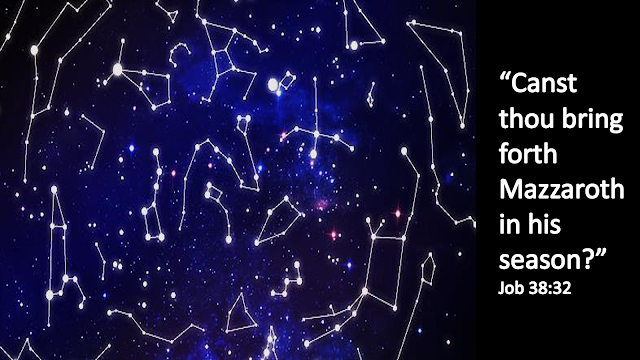 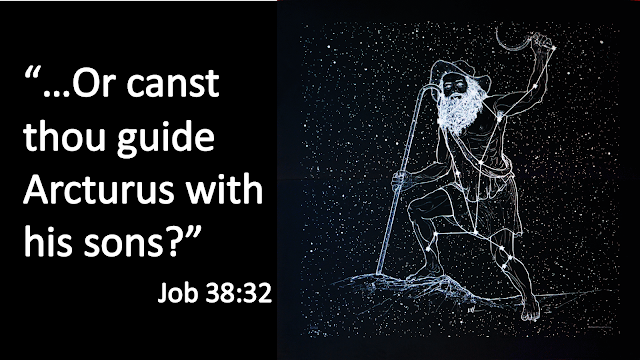