In Romans 5, there is a powerful statement which puts the Sacrifice of Christ in better perspective. When someone gives his (or her) life for another, that person is called a hero. But let's face it, a hero gives his life expecting that the life he's saving is worthy of being saved! Would a hero jump in harm's way to protect a hardened criminal? Probably not!

Yet, Christ died for you and for me, while we were still sinners - in other words, He gave His life in the extremity of our unworthiness:


"For scarcely for a righteous man will one die: yet peradventure for a good man some would even dare to die. But God commendeth His love toward us, in that, while we were yet sinners, Christ died for us."

One of the most beautiful presentations of this concept is given in the stars - specifically in the scales and its family of constellations. 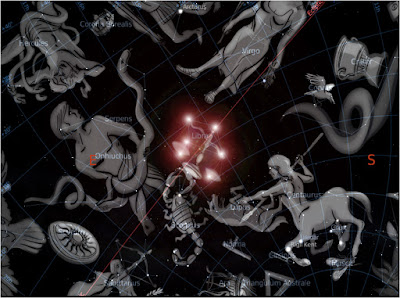 The Scales, are today called Libra, which means "the weighing" in Latin. In Hebrew, Libra is called Mozanaim – “the scales, the weighing” In Arabic, it is Al Zubena – “purchase, redemption gain”.

The Hebrew name for this constellation appears 10 times in the Bible. Here are a few examples, which show the fuller meaning and application of the Scales:

1) Scales were used for purchasing things in a trustworthy manner, as it says in Leviticus 19:35-36.

Leviticus 19:35-36  “Ye shall do no unrighteousness in judgment, in meteyard, in weight, or in measure.  Just balances (mozanaim, "the scales"), just weights, a just ephah, and a just hin, shall ye have: I am Yahweh your God, which brought you out of the land of Egypt.”


2) Scales were used to determine righteous weights in commerce, and became a symbol of demonstrating a righteous cause, as it says in Job 6:2. 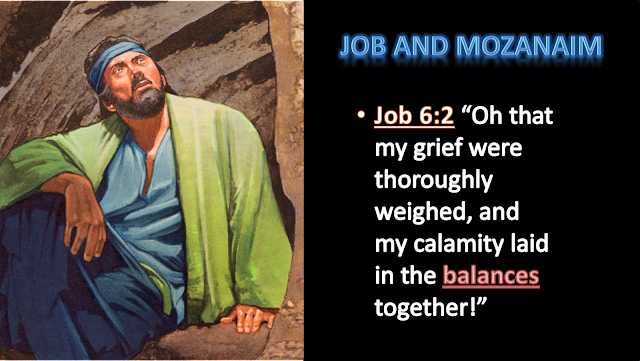 3) Scales were used in judgment as well, as it says in Daniel chapter 5. In the context, Daniel interpretted the message of the bloodless Hand, which had written the following message on the wall of Belshazzar's palace: 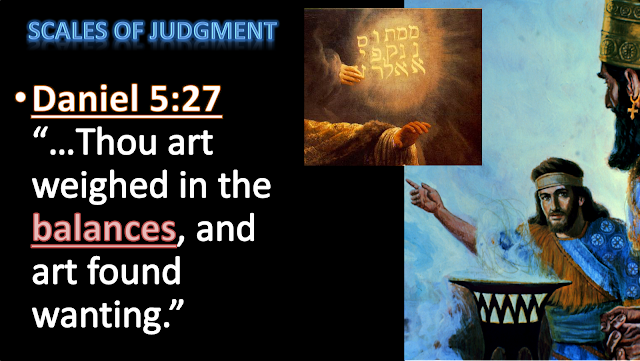 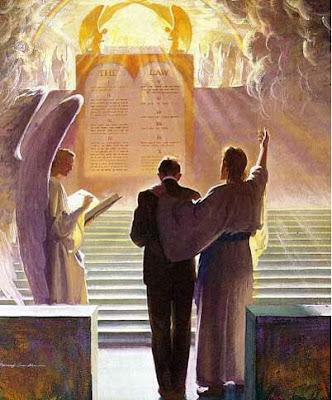 All of these aspects of the scale are part of this starry message in the constellation Mozanaim. Our lives are weighed in the Balance of Divine Judgment. Also, there is a "commercial" transaction going on for the Redemption of each soul, as it says in 1 Corinthians 7:23, "ye are bought with a price..."

Let's look at the full message of this constellation through the individual star names as well (the original Hebrew star names). 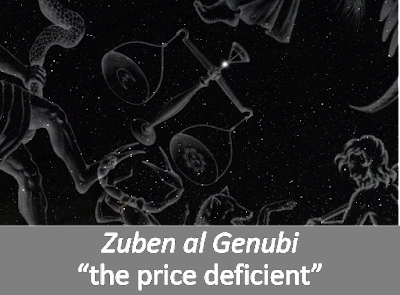 The star in the top, center part of the scale was named Zuben al Genubi, which means: "the price deficient". This is a reference to the fact that when we are weighed in the Scales of God's Righteous Judgment, being sinful, we don't measure up! This is a sobering position in which to find ourselves, to say the least. But the star picture has more to tell us. Let's look at the meaning of each of the main stars in Mozanaim (the Scales). The star being named will be brightest in each picture, for clarity. 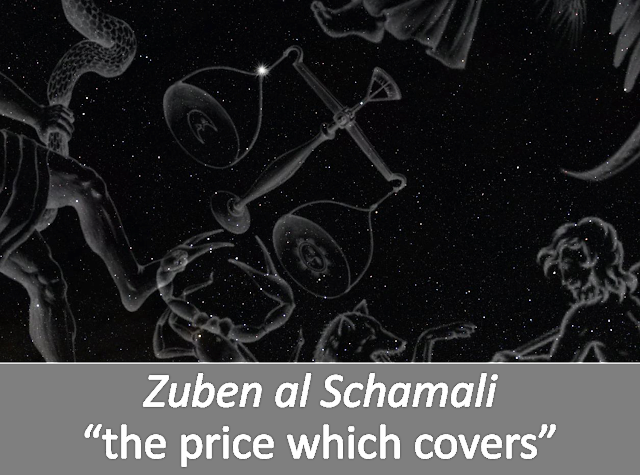 In summary, the Scales (Mozanaim) give us a reminder of the Justice of the Almighty. While one star is named for the verdict: "the price deficient", which means that we are weighed and found "wanting", the star on the other side tells us that there is a "price that covers" our deficiency. And what is that price?

One of the three decans (the decans are like the constellation family) of Libra (Mozanaim) is Crux, anciently called Adom. This constellation is also known as the Southern Cross because it appears in the sky in the Southern Hemisphere. Adom is Hebrew for “the cutting off” - a reference to the Death of Christ.

Not only is this constellation depicting the Cross upon which Christ died, it is also depicting the Hebrew letter Tav. In Paleo-Hebrew (Paleo-Hebrew is the oldest and most original form of Hebrew), the Alef looks like the head of an ox and the Tav looks like a cross (see the letters on the far right below): 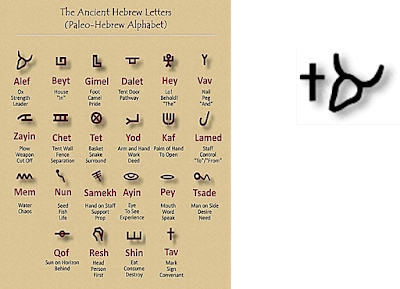 When Yahshua said this, He was making a direct reference to Isaiah 41:4, 44:6, and 48:12, where Yahweh Himself says that He is the First and the Last -- and explicitly declared that there is no other “god” beside Him.

Yahshua also said He was the Truth. "I Am the Way and the Truth and the Life; no man comes to the Father apart from Me" (John 14:6). 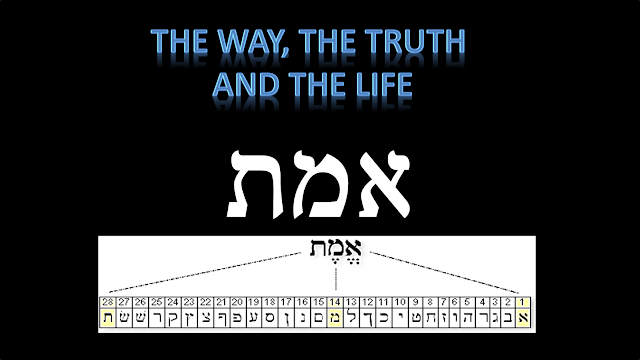 Notice that the word for truth (which appears in modern Hebrew as is shown above) contains the first letter aleph (reading from right to left), the middle letter mem, and the last letter of the Hebrew alphabet, tav, which the Jewish sages say means that the truth contains everything from Aleph to Tav:

Indeed, Pilate's question, "What is truth?" is a category mistake, since truth is not about "what" but about "Who." That is, truth is not something objective and static, a thing to be known and studied from a distance. No. Truth is essentially personal. It is personal disclosure of the character of the subject. Understood in this way, Truth is a way of living, a mode of existence, a relational truth.

The letter ‘tav’ means “a mark” especially a “boundary-mark, a limit or a finish". Consider what Yahshua said, as He was dying: 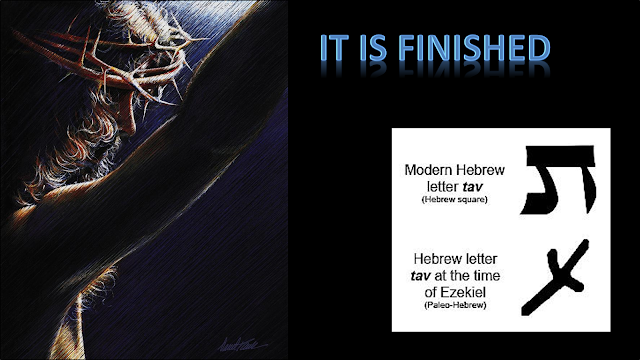 It is because of what He has done for us - Who was the embodiment of the Tav - that we may face the Righteous Scales of Judgment one day.

"For scarcely for a righteous man will one die: yet peradventure for a good man some would even dare to die. But God commendeth His love toward us, in that, while we were yet sinners, Christ died for us."

What a wonderful God we serve! Sometimes, we need to just stop and let it in, about what Yahshua has done for us. He gave all, not for the worthy, but for sinners - for you and me.
Consider the words to the hymn: