Christians would be hard pressed to find something in the 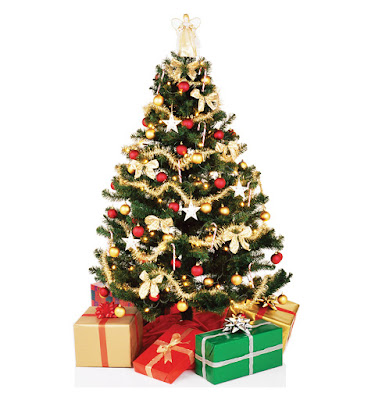 To find where the Christmas tree originated, we must go all the way back to ancient Babylon and to the founding of Babel. 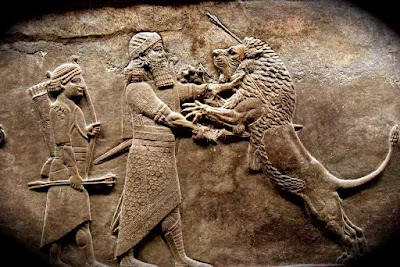 Genesis 10:8-10 "And Cush begat Nimrod: he began to be a mighty one in the earth. He was a mighty hunter before Yahweh... And the beginning of his kingdom was Babel, and Erech, and Accad, and Calneh, in the land of Shinar."

Nimrod, was a wicked man who ruled the early Babylonian empire with a tyrannical and idolatrous hand. He led the people in worshipping the sun. Nimrod was the son of Cush, who was the son of Ham (one of Noah's three sons). This means that Noah was Nimrod's grandfather.

In Genesis 10:8, as we read above, the Bible says that Nimrod began to be a "mighty one". The two words "mighty one" are translated from the Hebrew word "elohim", which means that 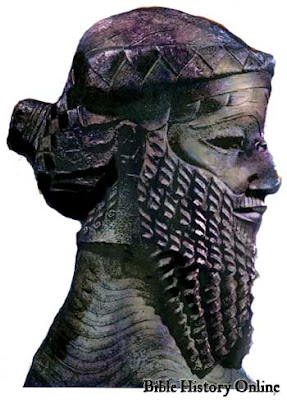 Nimrod began to be a false god and that he arrogantly accepted worship that was due only to Yahweh.

Nimrod, the grandson of Noah, became the first king and was historically known as Sargon I, or Sargon the Great. He built Babylon and Nineveh. Being warlike, he often wore a type of helmet with a horn in the front; a trait inherited by the druid Vikings of the Celts, descendants of the Assyrian 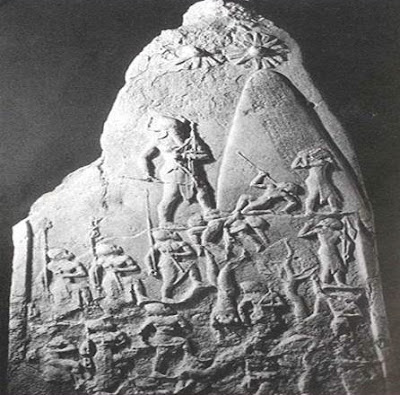 In the stone relief carving, shown on the right, Nimrod is the highest figure. Look carefully at his helmet and you will notice the horns.
Nimrod, means "tyrant“. And the name certainly fit him, for he led the Sumerians of Babylon to pay tribute to the skies (sun, moon, stars, and planets) with the sacrifice of their children. The Tower of Babel was built for this purpose, echoed in other cultures such as the Aztecs, Mayans, and Incas.

Because Nimrod built the Tower of Babel as an act of rebellion against the one true God, Yahweh struck his followers with a communication problem. Suddenly, the building effort was halted because the workers no longer spoke the same language. Scripture tells us that prior to Babel everyone spoke one language, but after God changed the languages, the people were scattered.

Those who spoke the same language congregated together, and smaller civilizations were begun. But the pagan worship and ideologies which they had learned under Nimrod's leadership were continued. This is why the pagan trinity of Nimrod, Semiramis (his wife), and Tammuz (his so-called "son") are found in every pagan culture. Their names have been changed (because the languages were changed), but the way in which they were worshipped, and the days upon which they were worshipped, remained the same!

Over the centuries, there have been certain key figures who were so evil that they are remembered for it, long after their deaths. Cain was such a one. So was Hitler, in more modern times. Considering all the evil such tyrannical, historical figures have caused, some have wondered if killing such an evil person might be doing the world a favor. For example, could the deadly holocaust have been prevented, if Hitler had been "conveniently" removed beforehand? Obviously, such questions are mere speculation, for Hitler was not removed in time...

But in Nimrod's case, someone did decide to take him out of the picture, in order to rid the world of his great evil. Shem (Nimrod's uncle) killed him. Ancient legend states that Shem cut Nimrod’s body into 12 pieces and sent them throughout the land as a warning that such idolaters would be judged by the only true God.
Have you ever heard of the story of Horus or the singular eye on the back of the dollar bill? This has to do with the killing of Nimrod. In Egypt, Semiramis is Isis, Nimrod is Horus and Shem is Seth. 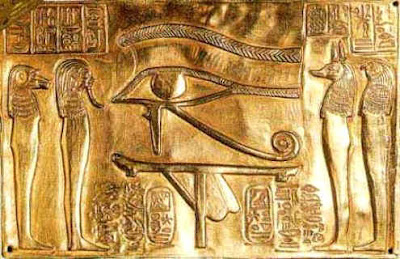 The Egyptian legend states that Seth  killed Horus by hacking him to pieces. Isis however, went down to the underworld and retrieved some of his body parts such as, his eye. The famous Egyptian obelisk is another of Horus' (Nimrod's) body parts. Most of the pagan cultures have similar stories.

At this point, you may be wondering what all this has to do with Christmas trees...  Well, I'm getting to that part of Nimrod's story....

Nimrod's wife, Semiramis, became pregnant some time after his demise. It had been far too long since Nimrod’s death for anyone to believe he was the child’s father by natural means. But Semiramis had an amazing story to tell the people.

She consoled the people by making them believe the child she carried was Nimrod "reincarnated.” She told them that she had become impregnated by the rays of the sun while mourning Nimrod’s death in the forest. Where her tears fell to the ground, Semiramis claimed the sun god caused a pine tree to sprout and grow before her eyes. 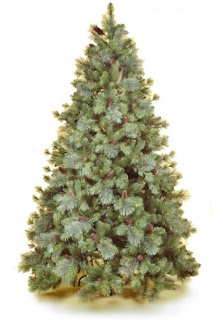 This pine tree miraculously grew to full height as she watched.  Nimrod, she claimed had shown her, by pointing the pine tree straight to the heavens, that he was not really dead, rather he had taken a new shape – as the sun god.

Semarimis further blasphemed by telling the people that the child she carried was the divine child promised in the Garden of Eden. She told them the child was the Messiah. She told them he was God. Thus, her son, Tammuz was the first anti-Christ.

The supposed child of Nimrod was born on December 25.  In honor of his birth, Semarimis cut down the pine tree – claiming it was the miraculous tree grown from Nimrod’s power – and set it up in her palace yard.  The people were commanded to deck it with gold and silver offerings. If they were generous with her and her new child, she claimed that Nimrod would bring back the sun to full strength lengthening the hours of sunlight. This was the first Christmas tree – although it did not bear this title until much later.

It is because the Christmas tree has absolutely nothing to do with Christ or His birth, that Jeremiah could speak of this tradition, which went on even in his time.  The prophet of God did not speak kindly of Christmas trees either.  Clearly, Jeremiah knew that decking a tree with gifts was a pagan practice.

Jeremiah 10:2-4 "Thus saith Yahweh, Learn not the way of the heathen, and be not dismayed at the signs of heaven; for the heathen are dismayed at them. For the customs of the people are vain: for one cutteth a tree out of the forest, the work of the hands of the workman, with the ax. They deck it with silver and with gold; they fasten it with nails and with hammers, that it move not."

In order to get a full understanding of what Jeremiah meant in this text we need to look up the word “vain” in the original Hebrew. Today the word “vain” means that a person is conceited or stuck-on-himself. But this is not what the word meant. Vain is a Biblical term which was used to describe idols. It means "empty" and something "which leads astray".

The command to “learn not ways of the heathen” is about us teaching our children such spiritual emptiness or perpetuating this in our own homes.  It is our job, to teach the truth about these pagan practices in a setting such as this one, however.  We know this because Scripture tells us to "expose" the works of darkness:

Ephesians 5:11 “Have nothing to do with the fruitless deeds of darkness, but rather expose them.”

Returning to our story of the first celebration of December 25 – Semiramis named her illegitimate child "Duzu" or Tammuz, which is Babylonian for the son who rises.

His symbol was the cross the sun worshipper could see when 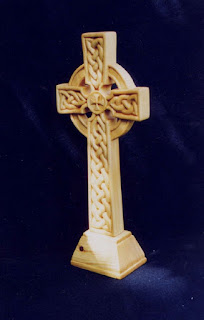 squinting to look toward the sun.  The sun disk embedded around the arms of the cross showed Tammuz’s source of power – the sun – once again demonstrating that Tammuz was the re-incarnated sun god manifest in the flesh.

Sometimes the Tammuz cross was formed with pinecones, as we see in this ancient altar stone (below).  This was a reminder that the miraculous pine tree, a phallic symbol of the sun god, was the proof of Tammuz’ divine birth. 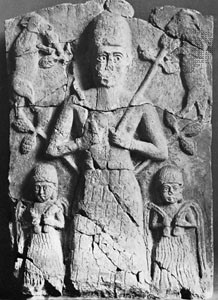 In the prophet Elijah’s day, Nimrod had come to be known as Baal, meaning LORD, and was worshipped by the Babylonians as the sun in the sky -- thus the origin of "going to the heavens" at death.  (For more information, "TheStory Of Nimrod, As It Relates To Christmas And Easter", by Wilhelm J Wolfaardt.)

Yahweh used Elijah as His mouthpiece proclaiming beyond question exactly how the true God felt about His people mixing the worship of Baal into their worship of Yahweh. Elijah’s bold question still rings down through the portals of time just as powerfully today.

“How long halt ye between two opinions!? If Yahweh be God, follow Him! If Baal is God, then follow Him…”

But the mixing of that which is sacred with that which is pagan and profane did not honor or please God in Elijah’s day, nor does it now.

Since the first pine tree was decked in Semarimis’ palace courtyard, pagans later came to bring the decorated pine trees into their homes and temples. In bringing this phallic idol into their homes they sought the spirit of the sun god to impregnate their home.  And they honored the birth of Tammuz by showing that they believed in his divine conception – thus they declared Tammuz to be the "Messiah", just as Semarimis had proclaimed him to be. 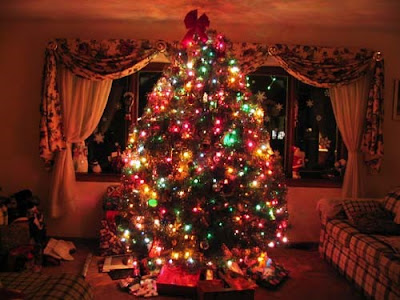 But Tammuz isn't the true Messiah. He is the son of the sun-god. The worship of Nimrod and his unholy son is something the apostle Paul warned us never to do: