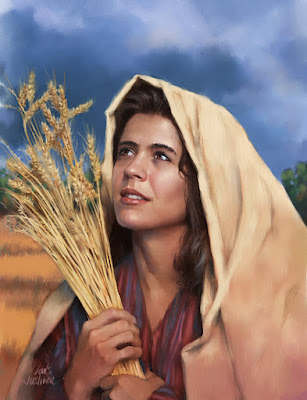 The story of Ruth is often retold among believers at this time of year (at Shavuot or Pentecost). This is because it happened at about this time. There are such beautiful things in this story that parallel the experience of God's people. So, now as we start reading in the book of Ruth, let's start with taking a look at the spiritual applications to be found in the wonderful story of Ruth.

Actually, the story of Ruth begins with a curse. Ruth was a Moabitess and was thus under the curse of Deuteronomy 23:3:

This first part of the story of Ruth has application for all of us as well. Since we are sinners, we too start out our story being under a terrible curse (Deuteronomy 27:26). But in the story of Ruth, we find the power of Redemption. Ten generations ended on Ruth, when she married Boaz. But God didn't just bring Ruth into His family as a lesser citizen. In fact, He blessed Ruth so greatly that she was a mother in the royal line of king David - and of Messiah Himself. Talk about a wonderful God (Matthew 1:5)!

Thus, right off the bat, we find tremendous encouragement by the magnitude of what God can do with each us. He is the wonderful God who can redeem someone so completely - even from the depths of the most grievous curse - and bless them to become a progenitor of Messiah!

Next, let's look at the setting of the story of Ruth. The story begins with a famine in the land. Ruth's story takes place in a time of complete financial devastation and suffering. This setting also strikes very close to home, making the story very relevant on many levels.

The names in this story all have prophetic meaning:

Elimelech means – “My God is King”


In the marriage between  Ruth and Boaz we have a “Levirate Marriage” – Deuteronomy 25:5-10

Naomi and her husband, Elimelech, seek a safer place to wait out the famine. This is how they ended up in the land of Moab. While there, their two sons marry Moabite girls - Ruth and Orpah.

All is well for a while. Then tragedy strikes. First Elimelech dies and Naomi is left a widow. Then Naomi's sons, Mahlon and Chilion both also die. Since a woman's security and inheritance came through the men in her life, Naomi's loss is even greater than the terrible heartache of losing her men-folk. Naomi had lost everything:  Her husband, sons, inheritance.


But even in the face of this great tragedy, and with her own dismal outlook for the future, Naomi did not seek her own advantage. Taking the girls would have given her security, in that when they re-married, their future husbands would also provide for Naomi.  But she did not act out of self-interest. She told the girls to return home to their fathers' houses. There they would find an inheritance, security, and the possibility of finding and marrying another husband. It was the only course to take, according to human eyes, in which there was hope for a bright future. 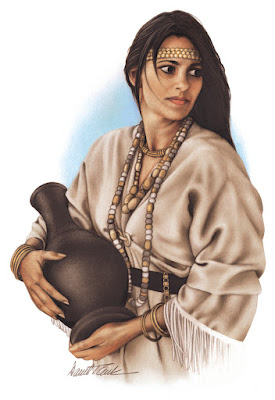 Orpah kissed her mother-in-law goodbye and returned to her parents, her former religion and culture. But Ruth refused to go back to her parents' home.


Orpah, when faced with no inheritance turns from Naomi and Yahweh and goes back to her old life.


She loves little – and is blessed little.


She looks for tangible assurance – and is lost (we know this because Scripture mentions that she returned to the idolatrous "gods" of her parents' house.

Orpah represents the group of Christians who follow God for a while. They even love Him and serve Him. But they follow to the edge of their culture; their comfort zone;  just short of total commitment.


They do everything that is asked of them:


- They go to church (or keep Sabbath)


But, when it comes to a real love test, when they have the opportunity to go above and beyond duty, they turn back. In the end, they are the group of people who follow God only for the blessings He bestows. But if they are faced with a future where there is nothing earthly to gain from doing so, they quit following God entirely.
On the other hand:


- Ruth goes above and beyond the call of duty. Her bond to Naomi and God is so deep that she, a Gentile, turns her back on the world to remain with Naomi and Yahweh.


- She has no assurance of an inheritance, but is willing to risk everything just to have the “crumbs” from the master’s table.

Ruth 1:16-17    "And Ruth said, Entreat me not to leave thee, or to return from following after thee: for whither thou goest, I will go; and where thou lodgest, I will lodge: thy people shall be my people, and thy God my God: Where thou diest, will I die, and there will I be buried: Yahweh do so to me, and more also, if ought but death part thee and me."

Scripture tells us about an End-time group of people who will have the heart of Ruth, in terms of how ardently they pursue God and Truth:


Jeremiah 16:19 “O Yahweh, my strength, and my fortress, and my refuge in the day of affliction, the Gentiles shall come unto Thee from the ends of the earth, and shall say, Surely our fathers have inherited lies, vanity, and things wherein there is no profit.”

Ruth clung to her mother-in-law, like Jacob to the angel. This is how whole-hearted we are to also be, in our devotion to God:
“I will not let you go until you bless me,” said Jacob (Genesis 32:26)
Like the widow who kept after the judge (Luke 18:7)
Search for Him with all your heart (Jeremiah 29:13)
Seek Him with the whole heart (Psalms 119:2) 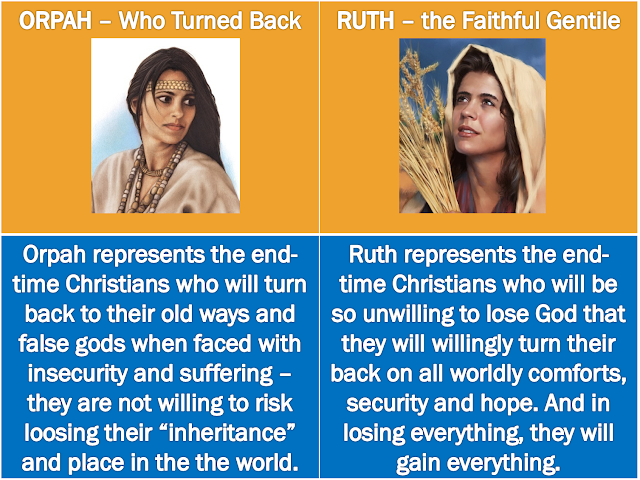 The reason we can know that the story of Ruth takes place around the time of Pentecost, at about the same time as now, is that the Bible says the barley harvest was just beginning, when Ruth and Naomi returned to Bethlehem together (Ruth 1:22).
God’s  people are to have removed the leaven of sin from their lives (Feast of Unleavened Bread), counted the omer each day (7 weeks of Sabbaths – 49 days), to the 50th day – Pentecost.


“The Kingdom of Heaven is like unto leaven (faith, hope, love), which a woman (God’s church) hid (incorporated) in three (the Covenant) measures (weighing, evaluating, gathering in) of meal (grain which has been ground – Truth which has been refined by pressure and persecution) until the whole (all the life experience) was leavened (completely permeated, filled) [with the Spirit of the Kingdom].


Ruth, drawn by the godly life of Naomi, and the grace of God, represents the Gentiles who will become part of the Remnant as they return to the House of Bread – the Oracles of God – Romans 3:1-2.
There is more in the Book of Ruth, which parallels the Marriage of our Heavenly Bridegroom and His Church. But for now, this is sufficient. Let's review the basics:


Pentecost is the “earnest” of the Marriage – in union with His Spirit.


The Book of Ruth typifies the spiritual classes of people at the time of The End.


The Curse has ended and full redemption comes to the Gentiles, through Ruth.


Ruth left all, with promise of nothing, but counted her loss as nothing, and gained all as a gift of mercy.
What a beautiful and timely message is to be found in the Book of Ruth!  May each of us love God as devotedly as Ruth. May we pursue Him whole-heartedly, even when there are no earthly benefits to be gained by it. May we seek His Face, even when doing so means that we will lose every earthly "blessing."
at May 18, 2017 No comments: