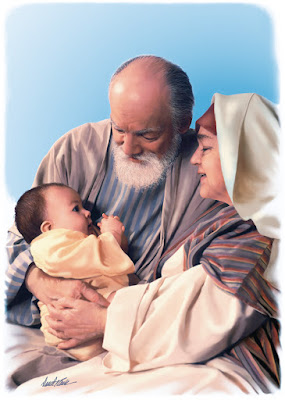 In Luke, we read about the birth of John the Baptist, the forerunner of Messiah. John was born on the Feast of Passover. It wasn't unusual for a prophet or significant person of Yahweh to be born on a Feast day. For example, consider the timing of Isaac's birth. Genesis 18:13-14 tells us that he was born "at the time appointed", which is translated from the Hebrew word "mo'ed" (Strong's Concordance number 4150 - meaning Feast of Yahweh).

But to show the connection between John and Passover, I need to start at the beginning. I'd like to show you the whole, beautiful picture of how Yahweh consistently always does His big Work on His holy Days. Here are a few of the significant events recorded in Scripture, all of which took place (there are no exceptions) on a Feast of Yahweh (His Feasts are listed in Leviticus 23): 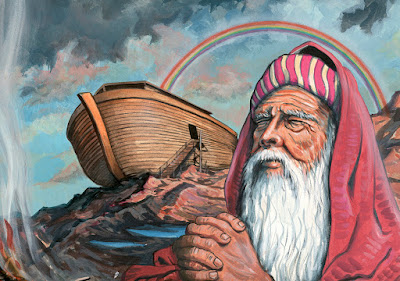 The great Flood also happened during Yahweh's Feasts - specifically the Feast of Unleavened Bread. But proving that requires a chain of evidence. So, to deepen our awareness of Yahweh's Pattern of always doing His big Works on His holy Days, I'm going to pause and give that chain of evidence, as follows:

Now, at first, it looks like the Flood didn't happen during Yahweh's Feast days...  Because the Flood came in the second biblical month.


Genesis 7:11 "In the six hundredth year of Noah's life, in the second month, the seventeenth day of the month, the same day were all the fountains of the great deep broken up, and the windows of heaven were opened."

In the Torah (Genesis-Deuteronomy) a special provision was given, which allowed for Passover/Unleavened Bread to be kept a whole month late. This provision was given in the cases when a death happened in the family. If a family had a death around the timing of Passover (Passover is the fourteenth day of the first month and Unleavened Bread begins on the fifteenth day - Leviticus 23:5-6), they were spiritually unclean and could not keep the Feast at the regular time. In such cases, Yahweh instructed His people to keep the Passover and Unleavened Bread on the same days during the second biblical month:


Numbers 9:6-7, 1o-11 "And there were certain men, who were defiled by the dead body of a man, that they could not keep the Passover on that day: and they came before Moses and before Aaron on that day:  And those men said unto him, We are defiled by the dead body of a man: wherefore are we kept back, that we may not offer an offering of Yahweh in His Appointed Season among the children of Israel?... Speak unto the children of Israel, saying, If any man of you or of your posterity shall be unclean by reason of a dead body, or be in a journey afar off, yet he shall keep the Passover unto Yahweh.  The fourteenth day of the second month at even they shall keep it, and eat it with unleavened bread and bitter herbs."

So, it was possible for the Passover and subsequent Feast of Unleavened Bread to be kept in the second biblical month. But the question is, was there a death in Noah's family that would have necessitated this delay? And, if so, was this death a big enough event to cause the Feast to be delayed planet-wide (for Yahweh Himself would have been honoring the delay by sending the Flood during the second Passover)? The answer is YES! But to show this, let's look again at when the Flood occurred.


Genesis 7:11 "In the six hundredth year of Noah's life, in the second month, the seventeenth day of the month, the same day were all the fountains of the great deep broken up, and the windows of heaven were opened."

The Flood came when Noah was 600 years old. And it started in the second month, on the seventeenth day of the month, which was during Unleavened Bread, if a death had caused a second Passover... So who died? Methuselah!

As Chuck Missler explains in the Koinonia House website article “Meanings of the Names in Genesis 5:

“The Flood of Noah did not come as a surprise. It had been preached on for four generations. But something strange happened when Enoch was 65”. Enoch was given a prophecy that as long as his son was alive, the judgment of the Flood would be withheld, but as soon as he died the flood would be sent forth.’

Enoch named his son to reflect this prophecy. The name Methuselah comes from two roots: muth a root that means “death” and from shalach which means “to bring” or “to send forth”. Thus, the name Methuselah signifies “his death shall bring”. 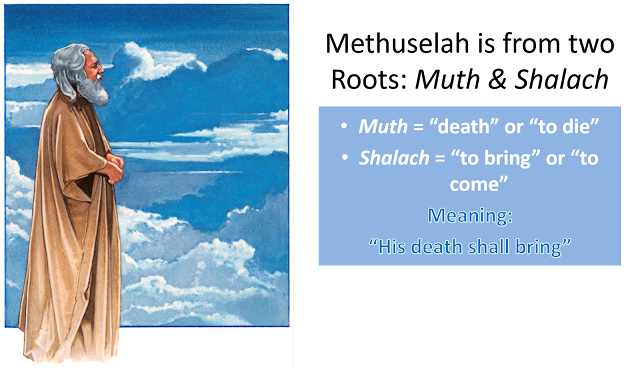 And indeed in the year that Methuselah died the Flood came. It is therefore fitting that his lifetime is the oldest in the Bible, showing the extreme extensiveness of God’s great mercy.

But to prove that Methuselah died the year the Flood came, you need to do a bit of math, from the biblical record of the patriarch's ages. Remember, he would have had to die in the first biblical month in order to have died the year of the Flood (causing a Passover delay - since every saved person on earth, at that time, was related to Methuselah). 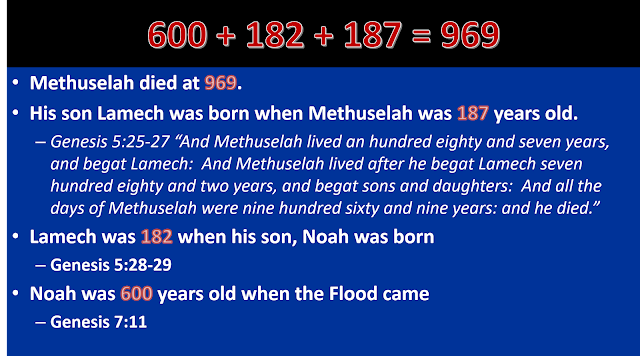 Genesis 7:11 tells us that Noah was 600 years old when the Flood came.

Genesis 5:27 tells us that Methuselah died at 969 years old.

Now let's do the math: 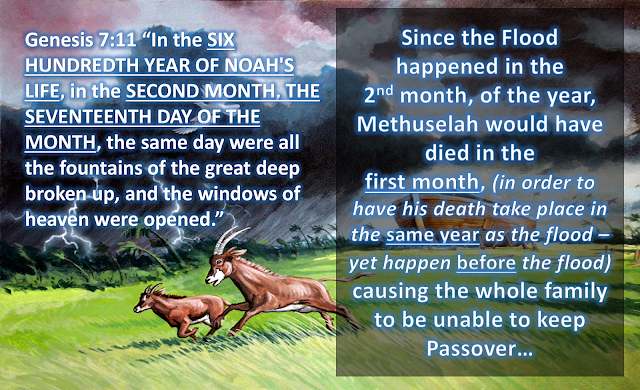 Methuselah died in Noah's 600th year, which happened the year of the Flood...  So, how can we know that the Flood happened during the timing of the second Passover/Unleavened Bread? The following chart shows the timing of this Feast and the Flood: 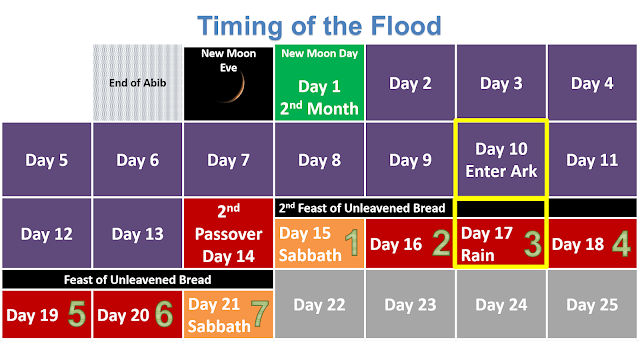 There are no exceptions to this Pattern:

And this Pattern continued in the New Testament. Here are a few examples... 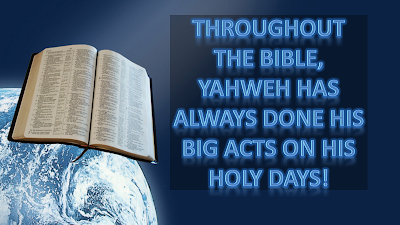 The birth of John is one small, but powerful piece in a bigger picture of Yahweh's Pattern. And, according to the prophet Daniel, Yahweh's Pattern of doing His Work on His holy Days will continue.

Thus, the birth of John isn't just a great story. It is a lesson to all who are called to the Final Elijah team...  Watchman! What of the night? (Isaiah 21:11-12) Do you know what time it is - prophetically speaking? When we keep the Feasts of Yahweh, we align with Yahweh's Heavenly Time-clock. This is a vital part of being a faithful watchman.