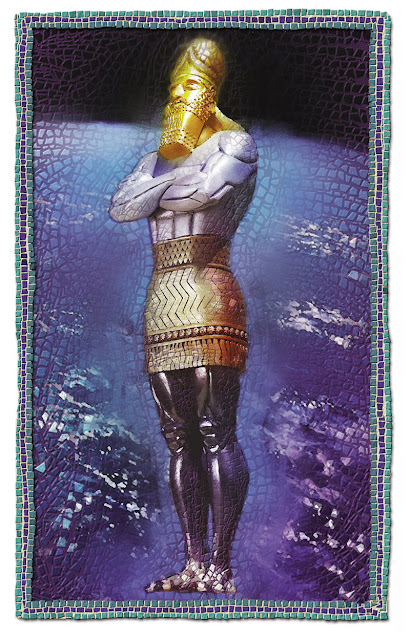 In the prophecy of Daniel 2 we read about how God gave Nebuchadnezzar a dream in which he saw a great image of a man, made out of different metals. In around the year 606 BC, God revealed the interpretation of the dream to the prophet Daniel. In this dream/vision, Yahweh, through the prophet Daniel, foretold the future kingdoms of this world right up to the very end, which we can confirm through historical records. And, as we will see in today's study, we are now living in the time of the iron and clay feet of the image.


Daniel 2:31-35 "...Thou, O king, sawest, and behold a great image. This great image, whose brightness was excellent, stood before thee; and the form thereof was terrible. This image's head was of fine gold, his breast and his arms of silver, his belly and his thighs of brass, his legs of iron, his feet part of iron and part of clay. Thou sawest till that a stone was cut out without hands, which smote the image upon his feet that were of iron and clay, and brake them to pieces."

BABYLON -  Head of GOLD
The first kingdom of this image is Babylon. We know this because Daniel told Nebuchadnezzar that he (king of Babylon) was the head of gold


Daniel 2:38-40 "...And wheresoever the children of men dwell, the beasts of the field and the fowls of the heaven hath he given into thine hand, and hath made thee ruler over them all. Thou art this head of gold." 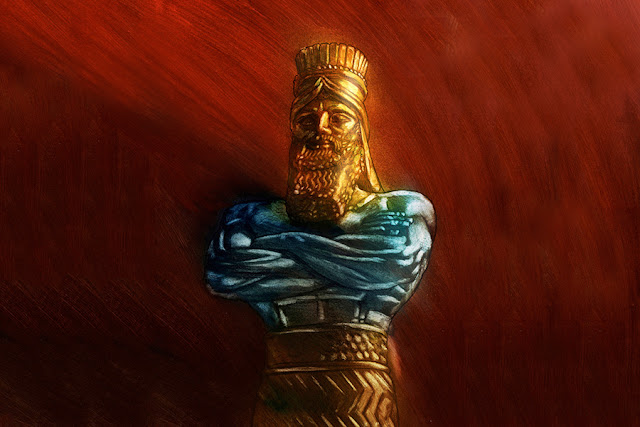 Clearly, the ancient kingdom of Babylon was the head of gold. This also gives us the timing of this kingdom's reign. Nebuchadnezzar ruled as king in Babylon from 605 - 539 BC.

Because Babylon was the most glorious kingdom, it was represented as GOLD.

Then Daniel reveals to Nebuchadnezzar what would happen


Daniel 2:39-41 "...And after thee shall arise another kingdom inferior to thee, and another third kingdom of brass, which shall bear rule over all the earth. And the fourth kingdom shall be strong as iron: forasmuch as iron breaketh in pieces and subdueth all things: and as iron that breaketh all these, shall it break in pieces and bruise. And whereas thou sawest the feet and toes, part of potters' clay, and part of iron, the kingdom shall be divided; but there shall be in it of the strength of the iron, forasmuch as thou sawest the iron mixed with miry clay."

Just as Daniel foretold, Babylon fell. In 539 B.C., Babylon was conquered by Medo-Persia, which was the kingdom represented as the silver chest of the image.  But this is where things get a bit strange, when you try to unite the messages from Daniel and John the Revelator.

Daniel foretells that Babylon would fall to the silver kingdom, bringing the reign of the golden head to and end. This did indeed happen, in 539 B.C. But, in Revelation, John records that Babylon doesn't fall until the very end of the world.

Revelation 14:6-8 “And I saw another angel fly in the midst of heaven, having the everlasting gospel to preach unto them that dwell on the earth, and to every nation, and kindred, and tongue, and people, Saying with a loud voice, Fear God, and give glory to him; for the hour of his judgment is come: and worship him that made heaven, and earth, and the sea, and the fountains of waters. And there followed another angel, saying, Babylon is fallen, is fallen, that great city, because she made all nations drink of the wine of the wrath of her fornication.”

Revelation 18:1-3  “And after these things I saw another angel come down from heaven, having great power; and the earth was lightened with his glory.  And he cried mightily with a strong voice, saying, Babylon the great is fallen, is fallen, and is become the habitation of devils, and the hold of every foul spirit, and a cage of every unclean and hateful bird. For all nations have drunk of the wine of the wrath of her fornication, and the kings of the earth have committed fornication with her, and the merchants of the earth are waxed rich through the abundance of her delicacies.”

How can both messages be true? How can Babylon have fallen in 539 B.C., and yet not have its final fall until the very end of the world?  Why does an angel whose message is given just before the plagues speak of Babylon?  Babylon isn’t over.  It was shown to Daniel as the HEAD of the image (Daniel 2). Why is Babylon the golden head?

Babylon is the “Brains”.  It’s way of thinking that pervades all the other earthly powers. One evidence of this is that Babylonian sun worship is very alive and present even now, and will be to the very end of the Last Days.

Since the image in the vision is a human form, we understand that feet cannot move or exist without the head. Yes, the kingdom of Babylon did fall, when it was conquered by Medo-Persia. But the system of Babylon with its false worship has yet to fall. In this way, Babylon is the brains of the operation, driving the kingdoms of the world, all the way into the time of the iron and clay feet.

The following comes from Signs of the End Times, who addresses the subject so well, that I need to add nothing further:

Breast and Arms of SILVER

MEDO PERSIA - So the next kingdom which God allowed to conquer Babylon is represented by the chest and arms of silver. And history tells us that the kingdom which conquered Babylon in 539 BC was the Medo Persian empire. As the name suggests, this kingdom had two parts. The Medes and the Persians, with Persia being the stronger nation. This matches the fact that it is represented by the part of the body of the image that has TWO arms.

Just as SILVER is 'inferior' to GOLD, Medo Persia did not have the glory which was upon Babylon. Also, it is known that taxes were paid in SILVER in Medo Persia.

Is it a coincidence that the DUAL kingdom of Medo Persia matches the two arms of the image? Well, take a look at the iron of legs below and you will see that maybe God chose the image of a man perfectly to match the future kingdoms of the world.

The soldiers of the Grecian empire wore armor made out of BRONZE.

An interesting note concerning the kingdom of Greece, as mentioned above, is that their soldiers wore armor made of BRONZE. And this obviously matches the brass thighs of the image. So we can see that the future kingdoms not only matched the figure of a man, but the metals used also.

ROME - Rome was the kingdom which ruled the world after it conquered Greece in 168 BC. And it was the dominant kingdom that ruled during the time of Jesus Christ.

IRON was widely used in the armor and weapons of the Roman Empire. And what about the TWO legs? History confirms that Rome split into TWO political areas. The Western Empire ruled from Rome and the Eastern Empire ruled from Constantinople (Turkey). ("The Prophecy of Daniel 2", Signs of the End Times, www.signs-of-end-times.com/daniel-2-prophecy.html).

Feet of IRON and CLAY 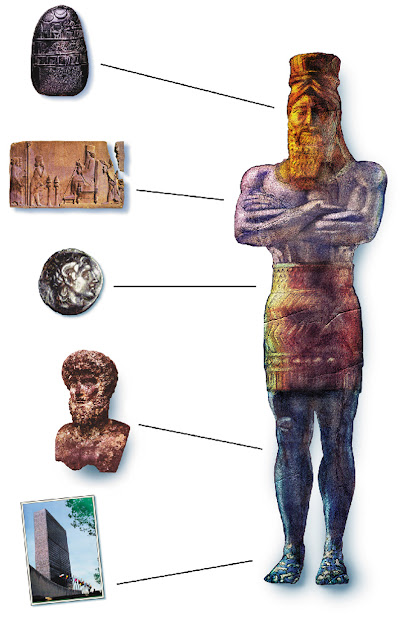 The iron of pagan Rome manifests in the feet in a slightly changed, but equally strong, form: papal Rome. But instead of there being one globally dominating power, the time of the feet show a divided rule. One ruling power is Papal Rome - the iron in the feet. But the other ruling power is clay. What power is represented by the clay?


The words "Edom," and "Esau," come from the same Hebrew root found in Daniel 2 as miry clay. It is a word which means "miry clay".  The "miry clay" that won’t mix with iron in the feet of Nebuchadnezzar’s image (Daniel 2), is the political powers which descended from Edom and Esau. Thus, we see that it is Islam and the Arab nations (who are the descendants of Edom and Esau). Notably, this power is in conflict with the iron of papal Rome and its daughters.

What about the toes on the feet? Do the ten toes represent anything? Yes. Take a look at the following Bible verse:


Revelation 17:12-13 "And the ten horns which thou sawest are ten kings, which have received no kingdom as yet; but receive power as kings one hour with the beast. These have one mind, and shall give their power and strength unto the beast."

The ten toes represent the 'ten kingdoms' in the last days which unite with the Papal beast and give their power to the beast so it can enforce its mark upon the world.

And that is how the vision of an ancient king (Nebuchadnezzar) has affected the lives of every person ever since - and is even affecting you and I right now. I am thankful to say that the time of this pagan domination is nearly over. God's Stone Kingdom is coming soon! Then and only then will the domination of ancient Babylon finally come to its full end.
at June 15, 2017 No comments: