As we read the story of Elijah the prophet and the time of no rain (which lasted 3.5 years - and is a shadow picture of the 1260 days in the future), there are several prophetic comparisons which warrant our attention. 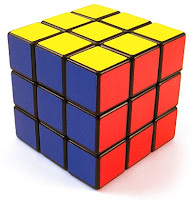 Before we begin, let me start off by giving a bit of study framework. Prophecy is kind of like a Rubix cube, in that it has three layers of fulfillment or application:

Here are a few examples, demonstrating how Bible prophecies have three layers of application, being fulfilled in these three different eras: 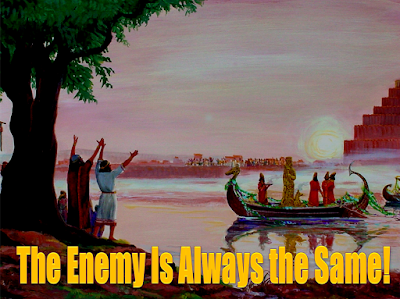 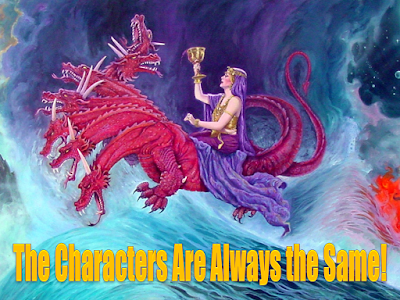 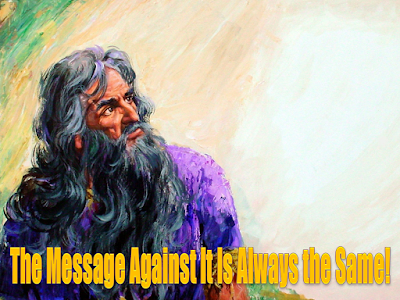 The Enemy is Always the Same: 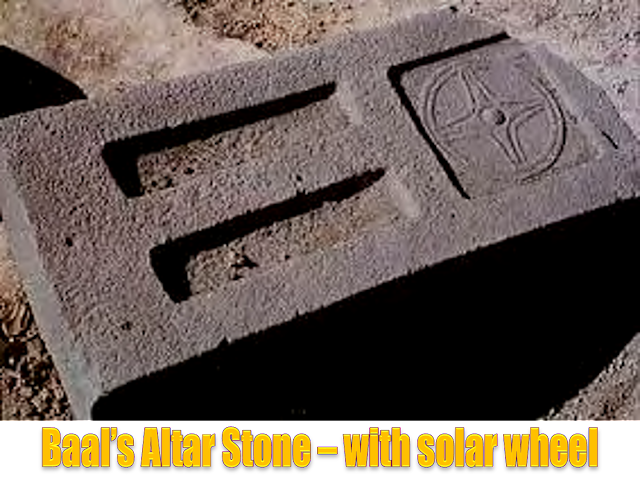 Actually sun worship didn't originate in the time of Elijah. Sun worship was founded in ancient Babylon. And the original name of the sun god was Nimrod, of biblical fame (Genesis 10:8-9).


"Rome, from its earliest history has always been the implacable enemy of God's truth... It was that same sun worship system of religion that had been originally concocted in Babylon. Anciently, it had come to Rome in fragments and was known historically as Pagan Rome. But later, as the Imperial Roman Empire collapsed and Papal Rome took its place, Babylonian sun worship manifested itself in an almost pure and radical form," (The Grand Design Exposed, p 30).

The Characters are Always the Same - Ancient Israel:

When Elijah gave the Elijah Message back in the time of ancient Israel, the key characters were:

Ahab - representing the political power who followed the lead of the ungodly woman, queen Jezebel.

Jezebel - the high priestess of sun worship who became the queen of Israel the manipulated and controlled the king.

450 prophets of Baal - these were servants of the queen, who did her bidding.

Apostatizing people - the professed people of God were on the fence about worship. They were accustomed to mixing the sacred with the profane by "worshiping" Yahweh in Baal-honoring ways. And by honoring Baal outright.

Elijah the prophet - standing alone Elijah called the people to turn back to Yahweh, stop the Baal-honoring practices, and repent.

Elijah delivers the Message of God, brings upon himself the ire of Jezebel, faces the threat of death and flees into the wilderness.


The Characters are Always the Same - John the Baptist:

When John the Baptist gave the Elijah Message in the time of Christ, the key characters were:

Herod - representing the political power who followed the lead of the ungodly woman, queen Herodias.

Herodias - she was Herod's sister-in-law and his niece. When she became the queen she manipulated and controlled the king, bringing him to ruin.

Salome - daughter of the queen, who did her bidding.

Apostatizing people - the professed people of God who were mixing the sacred with the profane by "worshiping" Yahweh in Rome-honoring ways.

John the Baptist - standing alone John called the people to turn back to Yahweh, stop the idolatrous practices, and repent.

John delivers the Message of God, brings upon himself the ire of queen Herodias, faces the threat of death and is martyred.

The Characters are Always the Same - The Final Elijah:

In the End of Time, all of God's faithful people are called to give the Elijah Message. In other words, we are all on the Elijah Team. Our Message is the same as it has always been. And once again, the key characters are:

Political Leaders (kings of the earth) - the political power who follow the lead of the ungodly woman, the Whore of Babylon, who rides the beast.

Papal Rome - the woman who rides the beast is the false queen who manipulates and controls world leaders, leading the world into "Christianized" sun worship.

Daughters of the Whore - Protestant churches, who do the bidding (follow the doctrines) of Papal Rome.

Apostatizing people - the professed people of God who are mixing the sacred with the profane by "worshiping" Yahweh in Rome-honoring ways.

God's faithful few - the ever unpopular, but highly needed followers of Yahweh call the people to turn back to Yahweh, stop the idolatrous practices, and repent.

The people of Yahweh will deliver the Message of God, bring upon themselves the ire of the Whore (whom Revelation describes as being drunken with the blood of the saints), faces the threat of death and will manifest both outcomes of the prior two Elijahs. In other words, some of God's End-time Elijah's will be miraculously protected from the threat of death - being protected and provided for in the wilderness - just as was the first Elijah. And some of God's End-time Elijah's will be martyred - just as was the second Elijah (John the Baptist). 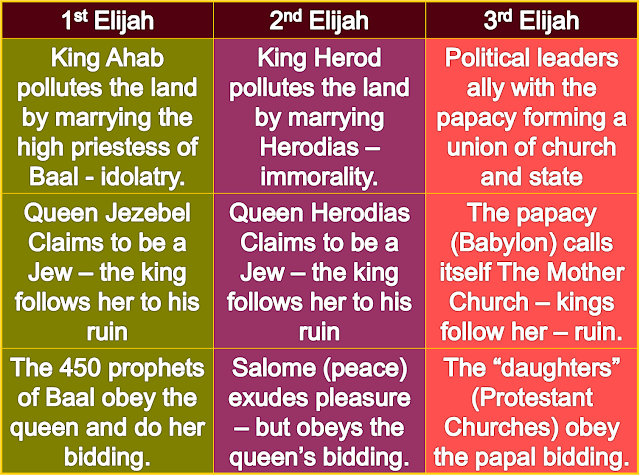 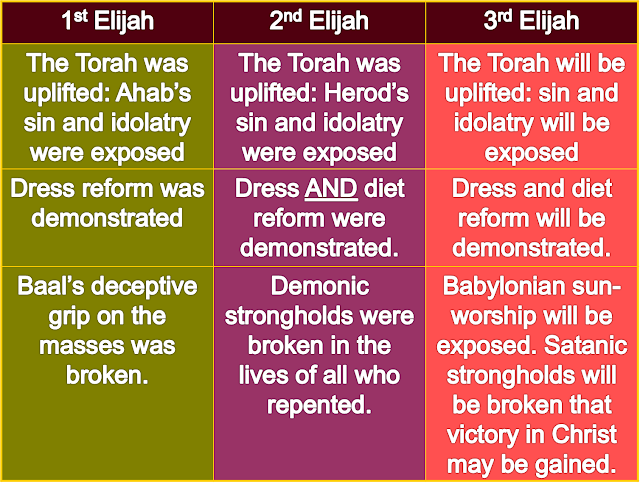 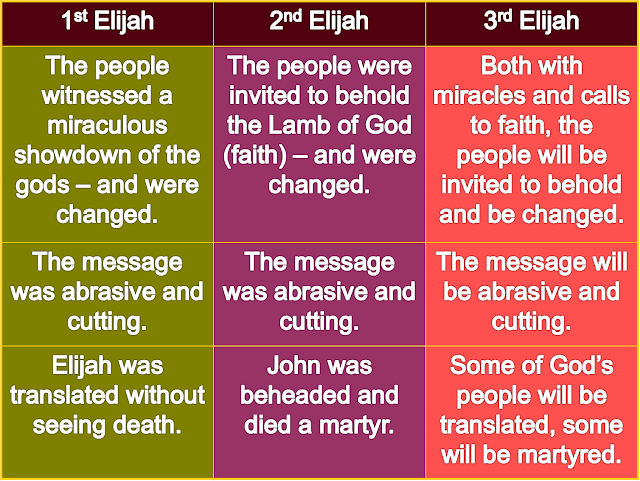 The Three Elijahs (by Shauna Manfredine)

When first came Elijah, the king of the land,
Had given the priestess of Baal his hand.
He’d broken the altar to the only true God,
Upon all YAH’s precepts he’d blatantly trod.

And Jezebel set up the worship of Baal,
While the people succumbed and just let her prevail.
And profane, idolatrous, sun worship stuff,
Did taint Israel’s worship til YAH had enough!

So YAH sent Elijah to set things to right,
To fearlessly clear up the people’s dimmed sight.
And Elijah spoke out and the false god was fired.
“Yahweh, He is God” were the words he inspired.

But Mount Carmel’s fireworks were too soon forgotten,
As another, like Ahab, arose just as rotten!
King Herod united the church to the state,
With an unholy wedding that brought much debate.

She was a claimed Jewess and he a claimed Jew,
But they worshiped the sun when Sukkot was through.
Once again pagan worship polluted the land,
And the people were tainted with sun-worship’s brand.

So God sent out Elijah disguised as John.
He loudly exposed the Herodias con.
When Elijah spoke out the false god was drowned.
And many beholding the Lamb were then found.

Much time has passed since John preached to men,
But all those same villains are here once again.
The kings of the earth have a worldly alliance,
With the Babylon woman who gives God defiance.

Once again sun-worship from Babylon Rome,
Has tainted the people and defiled the home.
The Nimrod Trees stand at the front of each church,
And Easter egg hunts cast a Estre church smirch.

The state and the church have indeed been united,
The sun-worship filth stands thus far un-righted.
Elijah? Where are you? Stand up, number three!
YAH’s call is resounding, “Reclaim men for Me!”