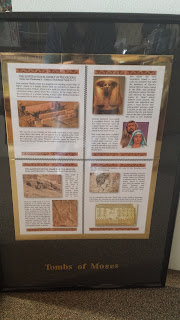 We have concluded reading the Book of Genesis and are starting on the Book of Exodus today. As we do, I have to start things off by sharing some of the backstory - the historical details - behind the story of Moses. The following write-up is from the displays my husband and I put up on Moses in a Biblical History Museum, in Winston, Oregon:


THE EGYPTIAN ROYAL FAMILY OF THE EXODUS:


Moses came to live at the palace at about age 12, which, according to Egyptian records was about the same time his Egyptian “grandfather” became main emperor over all Egypt. At this time, they moved from the palace at Memphis where the co-regent ruled, to Thebes where the main palace was.

At about age 18, Moses was designated the future “heir apparent”, with his mother, Nefure as his regent. She was now given the additional royal name of “Hatshepsut” (pictured in the statue above) and referred to as “queen” instead of princess. It gets very confusing from this point on because some Egyptologists have come up with a very elaborate scenario whereby they say that Hatshepsut proclaimed herself king. Now, a few words about this theory may help give a little understanding.

For one thing, the Egyptian line of royalty descent was based on very sacred beliefs - beliefs which would not in any way allow for a woman to become the “earthly embodiment” of the god. She could become the “royal wife”, the “great queen”, and in some cases possess the royal power to appoint a new pharaoh in instances whereby the throne may be empty at one point in time. But this fantastic scenario whereby the scholars say Hatshepsut proclaimed herself “king” is simply not possible, in Egyptian society.


In her temple at Deir El Bahri (shown on the right), there is a wall which depicts the birth of the future heir to the throne, which many believe is showing the birth of Hatshepsut. But there are a couple of problems with this scenario, as many recent archaeologists have noted. One, is that the baby is definitely a boy baby! And secondly, one scene shows the baby in the arms of Hatshepsut (Hatshepsut is plainly identified as the adult, holding the baby in this relief)! Many biblical scholars believe this carving showed Hatshepsut holding her SON – Moses!

THE EGYPTIAN ROYAL FAMILY OF THE EXODUS:
Moses: Known in Egypt as Thutmoses II

That Moses was always closely associated with his adopted mother is very apparent- after all, she was his only connection to the royal family. To justify his elevation to such royal position had to be carefully documented in a manner that would be acceptable to the system.

The evidence shows that he was elevated to this position, as “heir apparent” when he was about 24 years old.

Moses = Thutmoses II - Finally, when Moses was about 33 years old, he was designated
as the crown prince and became “Thutmoses II”. The numbers after the Egyptian kings’ names are not actually a part of their name- they are simply designations given them by the Egyptologists to identify each succeeding person of the same name. Some suggest that Thutmoses II married Hatshepsut. This is incorrect, but an understandable confusion since Moses was so closely associated – politically – with his adoptive mother.

Ancient historian, Josephus, tells that Moses, whom he said was called Thutmoses, was the general of the army and that he was very popular with the Egyptians. He attributes Moses as the general who pacified Nubia, which in turn served to increase the wealth of Egypt greatly by the gold paid as tribute by the Nubians.

THE EGYPTIAN ROYAL FAMILY OF THE EXODUS:
Moses was Thutmoses II – Evidence from Royal Tomb No. 71
Near ancient Thebes, there is a magnificent building called “Deir el Bahri”, which is a temple Moses built (as architect) to honor his adopted mother, Nefure. Above it is a tomb for Moses which has an unfinished statue carved above the entrance, in the virgin rock of the mountain, of a woman holding a small child. Biblical historians recognize this as Moses and his adoptive mother. 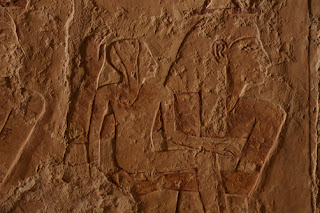 The records of the building of this tomb show that it was begun when Moses was about 18- the year he was designated as the royal son of pharaoh’s daughter and placed in line as the possible future heir-apparent. The name “Senmut” (another name for Moses or Thutmoses II) and “Nefure” are the names mentioned in this tomb.

Just below this tomb, excavators found a small rock-cut chamber that held the mummies of Hatnofer (whose Hebrew name, found in the Bible, was Jocabed) and Ramose (whom the Bible calls Amram), the Egyptian names for Moses’ actual Hebrew birth parents. His mother was embalmed and given a royal funeral (her gold-guilded funerary mask is shown on the left), which indicates that she was buried here at the time of her death. The body of her husband, Ramose, however, was clearly a secondary burial- his body had been removed from its original burial site and transferred to this grave- and it was clearly a non-royal burial.

This tomb was never finished and no one was ever buried in it. One reason being that another more elaborate, royal tomb was begun for Moses when he was about age 33/34- the year he was designated as Thutmoses II.

THE EGYPTIAN ROYAL FAMILY OF THE EXODUS:
Moses was Thutmoses II – Evidence from Royal Tomb No. 353
This tomb is equally as fascinating as the first (No. 71), for there was never a burial in it. This was the second tomb built for Moses and was intended to have been his royal tomb. It is very exciting to go down into the tomb and see how, at the time Moses fled and gave up his claim to the future throne, all work stopped on this tomb! It remains exactly as it was left to this day. It is finished down to the lower section of hieroglyphs and pictures- then, where the workmen stopped working, the pictures are drawn onto the wall in black ink.
The unfinished hieroglyphs, left only in line drawing form appear as shown on the left.

On an interesting side note, Tomb 353, or the Tomb of Senenmut (Thutmoses II), contains star an constellation charts, such as the one shown below. This shows Thutmoses II had an interest in astronomy, which for those who know the significance of the Mazzaroth will fully appreciate.

THE EGYPTIAN ROYAL FAMILY OF THE EXODUS:
Hatshephsut: According to Historians
HISTORIANS SIR MARSTON & JOSEPHUS WROTE THAT HATSHEPSUT WAS MOSES’ EGYPTIAN MOTHER

There have been a few historians, who have made the connection between Hatshepsut, Moses’ Mother, Tuthmoses II and Moses. One of these is Sir Charles Marston, who, in his book “New Bible Evidence”, from 1934, recognized that the Exodus had to occur during the 18th dynasty. Marston also recorded that Hatshepsut was indeed the “pharaoh’s daughter” mentioned in the Bible.

Marston brings out the fact that Josephus (who was a Jewish historian from about the Time of Christ, pictured on the left) gives some vital information as to this “Pharaoh’s daughter’s” identity. On p. 162 of his above mentioned book: “He does, however, mention the name of the princess who found Moses in the ark of bulrushes.”

THE EGYPTIAN ROYAL FAMILY OF THE EXODUS:
Thutmoses III: The Man Who Took Moses’ Place

When Moses fled Egypt at age 40, after having slain the Egyptian guard who was whipping the Hebrew slave, the emperor, Amen-hotep 1 (shown below) was very elderly. He had been preparing Moses for the throne for the past 22 years. Now, there was a big problem. Who would now be the future king?

In Memphis, a young man was being groomed to be appointed co-regent for Moses when he became emperor. This young man was immediately elevated to the rank of co-regent and given the same name of Thutmoses. The records show that he assumed the throne at his 22nd year in office (his 22 year). Now, this is a strange statement and tells much more than one might at first notice. A co-regent, or royal heir-apparent, begins counting his years when he is designated as the “heir-apparent”. That becomes his year one. Here, we have a man assuming office in year 22 and he assumes it under that same name as Moses had.

Keep in mind, that as the royal heir assumes each stage of office, “heir-apparent”, crown prince and co-regent, he also in some places counts his years from that particular appointment. This is why the years of “Thutmoses III are given as 54 years, while the years of Amenhotep II are given as 26 to 32 years (depending on what author you are reading). The problem with Thutmoses III, who took Moses’ place, is that there are no records of his rise through the ranks. He just suddenly appears, taking the throne in his year 22.
REIGN OF THUTMOSES = 54 years

When Moses fled, in order to continue the reign of the earthly embodiment of “Thoth” in the “Thutmoses” co-regent, this man simply assumed the years that Moses had held that position. In other cases, when a royal personage would die, the god is said to “fly to the heavens” and then re-descend into the body of whoever becomes the next earthly embodiment of the god. In this case, there was no death- there had to be an immediate transfer, which is exactly what took place. Everything that had belonged to Moses was simply figuratively transferred to this “new” “Thutmoses” and things went along without missing a step. This man is now referred to by scholars as Thutmoses III. All of the statuary attributed to him are actually the statues that had been made of Moses.

It was to this Thutmoses that scholars attribute 54 years of rule. However, 22 of those years belonged to the man he replaced, Moses. And the historic evidence proves this, too. If we subtract the 22 years from the 54 year total, we are left with 32 years. Now, instead of going through all the evidence, let’s just read what one historian has to say about this Thutmoses III:

Truly, it was 32 years later when the man who became emperor after taking Moses’ place, died. Amenhotep II was perhaps the greatest ruler of all ancient Egypt. By the time of his death, Egypt was truly the world power and the wealthiest nation. Hatshepsut remained alive for many years after Moses fled, and is named as queen on monuments very late into this king’s rule.

And that's probably sufficient for this part of the story. I'll try to share more - giving the identities of the Exodus Pharaoh and his first born son, who died in the 10th plague, later - when we get to that part of the story in our reading.