Today, I will focus on a few verses from Job 9. Job is the oldest book in the Bible. It also has more stars and constellations mentioned in it than any other book. Job extols the power of God, displayed through the stars.

Job 9:4-10 "He (God) is wise in heart, and mighty in strength: who hath hardened himself against him, and hath prospered?...Which alone spreadeth out the heavens, and treadeth upon the waves of the sea. Which maketh Arcturus, Orion, and Pleiades, and the chambers of the south. Which doeth great things past finding out; yea, and wonders without number." 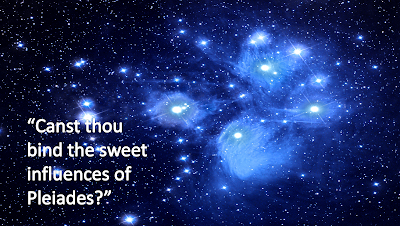 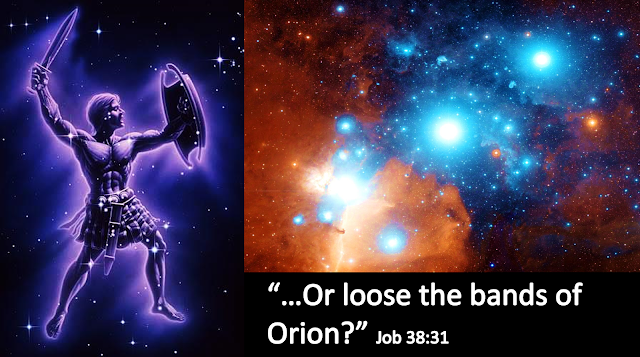 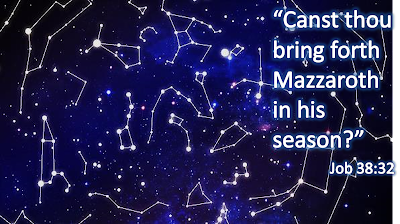 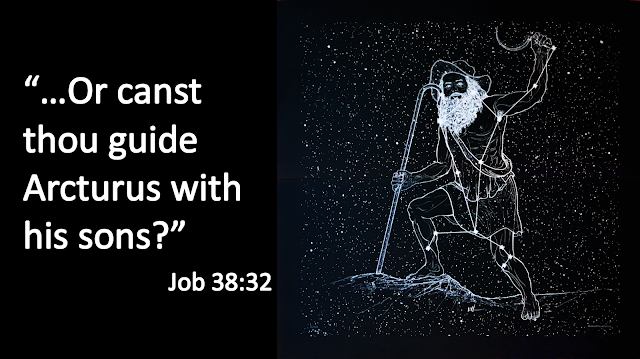 For just a moment, I'd really like to focus on Orion. This constellation is a very special one, especially for those who love God and eagerly await His Appearing...  But I don't want to get ahead of my story... Let's begin with a look at "known space".

First, do you know why they call it "known space"? That's because every time we build a more powerful telescope we see more than we did before. We only "know" what we can see, but we suspect there's probably much more out there than we can currently see. 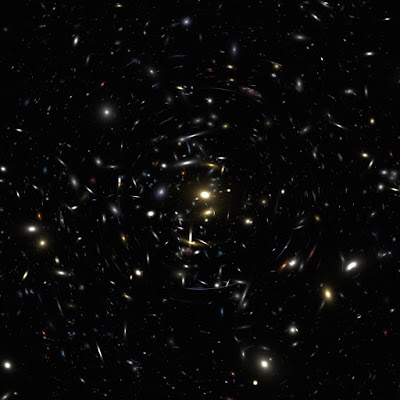 The Hubble Telescope was quite a technological breakthrough, expanding our awareness of "known space" much farther than ever before.

The photo on the left took 1,000,000 seconds to expose in 2003 (that's a little over 11 days). Those dots of light in the photo aren't suns or planets, they are GALAXIES! This photo led to the believe that there are over 100 billion galaxies in known space - each with over 100 billion stars! 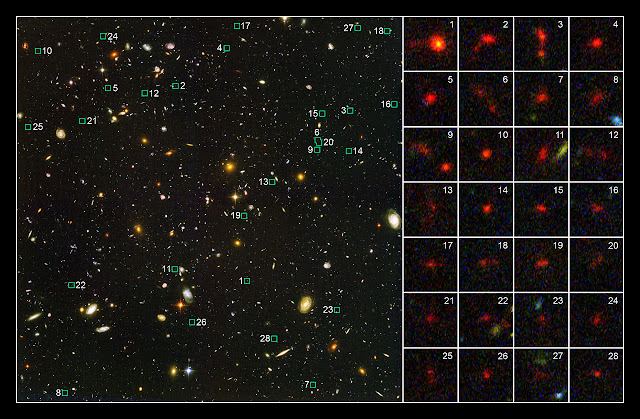 In closer examination, it was found that the most distant galaxies were red. This was significant because of the Doppler Effect Red Shift phenomenon. 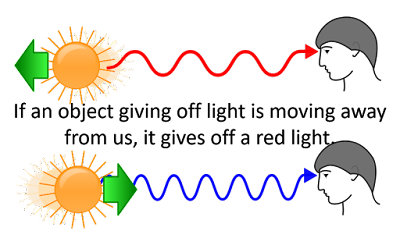 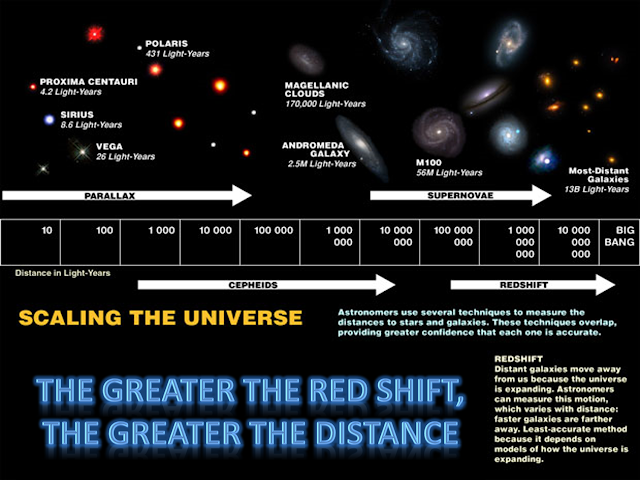 Therefore, those most distant galaxies, which appear red, are provably moving away from us. But the most interesting thing the Hubble telescope let us see is that there is the same density of galaxies viewed no matter where the telescope was pointed.

Now if earth were on the outer edge of the universe, you would expect that pointing the telescope towards the center of the universe would show a great amount of galaxies, while pointing the telescope towards the outer edge would show only a few galaxies, with much less denseness. But because Hubble reveals an equal number of galaxies no matter where astronomers look, scientists have found evidence that the universe has a CENTER. And this center must be astronomically nearby earth!

Before I go any further with the implications, let's start with the big one. This is evidence to support that the universe is spherical and ordered. Such a universe supports the idea that God created it. An ordered universe couldn't evolve by random chance.

Evolutionist scientists Edwin Hubble was not forthcoming with this information, because it didn't support his own evolutionary bias. When Hubble used his telescope to see the universe and published his findings in 1929, he observed the red shift in distant galaxies and knew what this meant.

But he didn't tell everyone that the red shift in the distant galaxies meant the universe had to be spherical and ordered, with a nearby center!

Why didn't Hubble report this?

In 1937, Hubble wrote, in "The Observation to Cosmology":

"The unwelcome supposition of a favored location (for earth) must be avoided at all costs... There must be no favored location in the universe, no center, no boundary... We must escape the horror of a unique position," (p 51-59).

Science went to a great deal of trouble to create a foolish theory and to hide the evidence, only because the obvious was unthinkable to them. If the universe is ordered, spherical, and we're near the center of it, we must be special. And there must be a Creator!

These scientists are Drs. Robert and David Gentry. In the above video link, you can hear them explain the red shift and how we know that the universe is spherical. And the discoveries they made make the constellation of Orion even more exciting. For it is through Orion's belt that we not only find the center of our universe, but also this is the location of God's "Great White Throne", mentioned in the Book of Revelation.

In ancient times, it was well-known that the constellation Orion marked the location of the center of the universe and the Throne of God. This is why the pyramids were built in the precise locations - to scale - as the star positions in Orion. The three famous pyramids in Egypt formed Orion's belt: 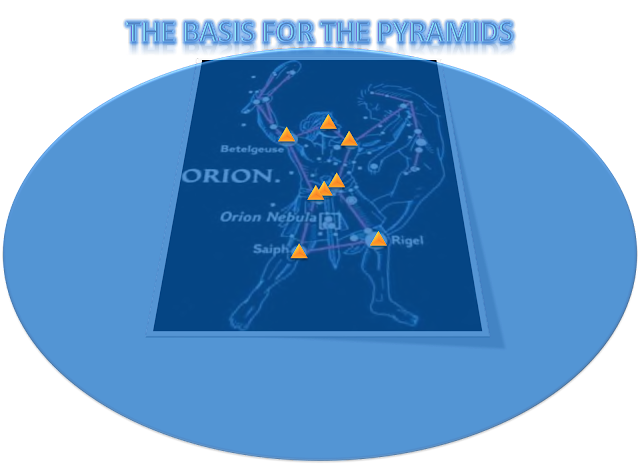 Since I was a child, my parents told me that our King would Return, and that He would come through Orion's belt. In fact, there is astronomical evidence to show that the three stars in Orion's belt are spreading.

This, too, is mentioned in Scripture as something only accomplished through the mighty power of God:

Job 38:31 "Canst thou bind the sweet influences of Pleiades, or loose the bands of Orion?"


What a wonderful Day it will be when our King Returns through Orion's belt and takes His children Home!

A few years ago, my family and I were on a homeschool fieldtrip. We were sitting in an IMAX theater preparing to watch the Hubble images in an amazing 3-D film flythrough. I have to say, I got goosebumps as the camera flew into Orion. Wow!!!!

I looked around me at the museum guests who were also seated in the theater and wondered if anyone else in the room knew the significance of what we were all seeing besides my family and me. To me, it was beyond breathtaking. I felt as if I were getting a sneak peak into some of what we will experience, by God's Grace, when our Saviour takes us Home at last.

So, today, as I read Job's references to Orion in Job 9, I thought you might enjoy seeing a sneak peak at the most amazing tour any of us will ever take - the tour of God bringing us through Orion's belt and taking us Home to Heaven at last. Well, enjoy...