One of the most interesting and enigmatic personages of the Bible is the king/priest Melchizedek. In Scripture, he appears only briefly mentioned, at least by this name. Yet, what is recorded of him is so profound that it foreshadows the work of the saints in the Last Days, and the role of Messiah, Himself!

In our reading in Genesis today, we find the story of a war which took place near the Dead Sea (see the map on the right). King Chedorlaomer, along with three Mesopotamian, allied kings; attacked Sodom and its surrounding kingdoms. In the conflict, Abraham's nephew, Lot, was taken captive and carried off northward.

When Abram learned that Lot had been captured, he armed his trained servants (a band of about 300 men) and pursued the invaders to the northern borders of Dan. There, Abram defeated Chedorlaomer's armies, rescued Lot and reclaimed all the other captives along with the valuables stolen from these defeated cities. Abram glorified God, Who was the reason for his victory, and returned southward, by way of Salem.

To honor his victory, the king of Sodom met Abram in the Valley of Shaveh, just outside Salem (which would later be renamed "Jerusalem"). The king escorted Abram and his company to the city 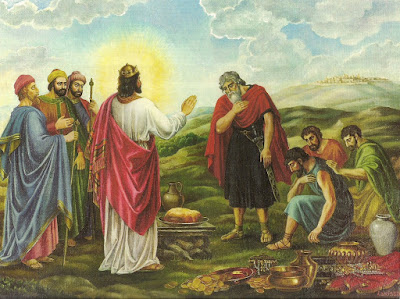 of Salem, where Abram returned all the reclaimed valuables and possessions to the original owners, keeping no monetary rewards for the supernatural victory. Abram did not want anyone to get the idea that a heathen kingdom had made him wealthy. Abram wanted God and God Alone to get the rightful glory for his obviously blessed estate. 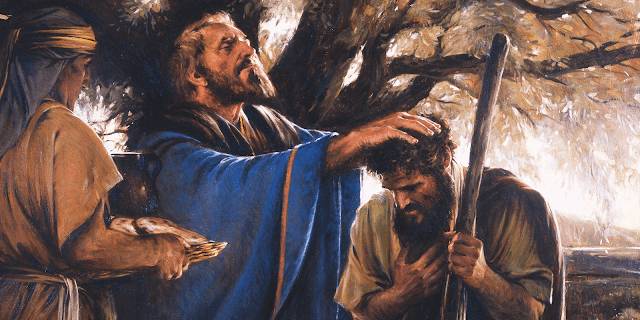 Now, on the scene comes the one whom the King James Bible calls Melchizedek. Melchizedek, who was the high priest and righteous king Salem, brought out bread and wine and blessed Abram (Genesis 14:18).

But who is this mysterious priest/king of Salem? His name, which appears as Melchizedek in our English Bibles, was actually Malki-Tzedek in Hebrew. It means, "my king". As John J. Parsons points out in his website hebrew4christians.com, in the online article "Who Was Melchizedek?":

The name "Malki-Tzedek" literally means "my king is righteous" (Malki = "my king" / "tzedek" = "just, righteous")...  It does not mean "King of righteousness" (as is sometimes claimed by Christian theologians), since the word "malki" contains a possessive personal pronoun (i.e., "MY king"). ("Who Was Melchizedek" by John Parsons)

The Hebrew Targum and the historical book of Jasher both identify Melchizedek as Shem. Shem was the most noble of the sons of Noah. He was the one to take up the mantle of Noah as the spiritual patriarch over the people of God.

Actually, as the following chart shows, according to the genealogies of Scripture, Shem actually lived for so long that he didn't die until 110 years after Isaac - Abraham's son! 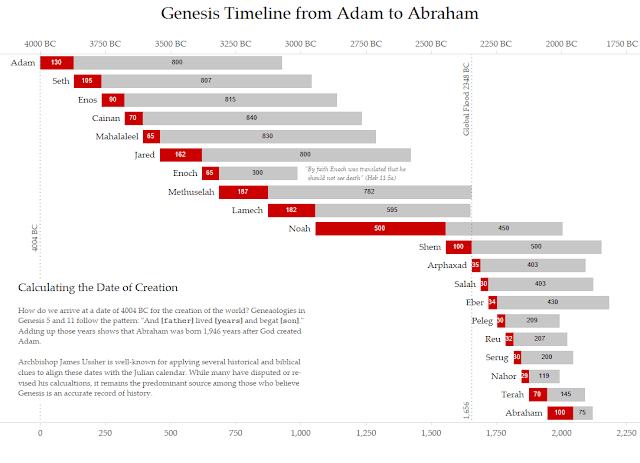 What must it have been like for Abraham to be able to talk to Shem? What would it have been like to meet someone like him - to know him, personally? Shem had lived through the Great Flood. He had witnessed the judgment of God upon the world - firsthand. Hebrew history suggests that, after Shem settled in Salem, he founded a school of the prophets to teach others about God and to encourage mankind to serve the true God of Heaven. The writings further state that Shem was present at the circumcision of Abraham and Ishmael (Gen. 17:23). Later, Isaac studied with him. And Isaac's wife, Rebekah went to counsel with him, about the struggle of her pregnancy. Indeed the historical writings point out that it was Shem who gave the prophecy (recorded in Genesis 25:22-23) that the "older" of her twins would "serve the younger".

When this prophecy came true and Jacob stole the birthright and blessing from Esau, the first place he fled was Shem's school in Salem. In other words, according to the Targum and book of Jasher, as well as Hebrew oral teachings, all three of the patriarchs of Israel (Abraham, Isaac, and Jacob) knew Shem - personally.

Revelation 5:9-10 - "And they sung a new song, saying, Thou art worthy to take the book, and to open the seals thereof: for thou wast slain, and hast redeemed us to God by thy blood out of every kindred, and tongue, and people, and nation; and hast made us unto our God kings and priests: and we shall reign on the earth."

Most significantly of all, Melchizedek prophetically foreshadowed (was a living picture parable of) Messiah, Who was to be our ultimate High Priest/King, after the order of Melchizedek

Psalm 110:4 - "The LORD (Yahweh) hath sworn, and will not repent, Thou art a Priest for ever after the order of Melchizedek."

Hebrews 6:20 - "Whither the forerunner is for us entered, even Jesus (Yahshua), made an High Priest for ever after the order of Melchisedec."

Hebrews 7:1-10 (ESV) - "For this Melchizedek, king of Salem, priest of the Most High God, met Abraham returning from the slaughter of the kings and blessed him, 2 and to him Abraham apportioned a tenth part of everything. He is first, by translation of his name, king of righteousness, and then he is also king of Salem, that is, king of peace. 3 He is without father or mother or genealogy, having neither beginning of days nor end of life, but resembling the Son of God he continues a priest forever.
4 See how great this man was to whom Abraham the patriarch gave a tenth of the spoils! 5 And those descendants of Levi who receive the priestly office have a commandment in the law to take tithes from the people, that is, from their brothers,[a] though these also are descended from Abraham. 6 But this man who does not have his descent from them received tithes from Abraham and blessed him who had the promises. 7 It is beyond dispute that the inferior is blessed by the superior. 8 In the one case tithes are received by mortal men, but in the other case, by one of whom it is testified that he lives. 9 One might even say that Levi himself, who receives tithes, paid tithes through Abraham, 10 for he was still in the loins of his ancestor when Melchizedek met him."