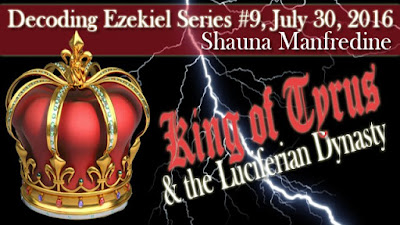 In Ezekiel, we read about an entity called "Tyrus". Ezekiel foretells Yahweh's judgment against Tyrus for rejoicing over the divine "spanking" Yahweh was giving to His people. Clearly, Yahweh is not pleased when someone takes joy in another's suffering. But there is more to this story. Just who is "Tyrus"? In my Decoding Ezekiel series (which is a 17-part series of DVD's), I did a talk about Tyrus, some of which I would like to share now to enhance what we've been reading.


Ezekiel 26:1-3 "And it came to pass in the eleventh year, in the first day of the month, that the word of Yahweh came unto me, saying, Son of man, because that Tyrus hath said against Jerusalem, Aha, she is broken that was the gates of the people: she is turned unto me: I shall be replenished, now she is laid waste: Therefore thus saith Yahweh God; Behold, I am against thee, O Tyrus, and will cause many nations to come up against thee, as the sea causeth his waves to come up."

Tyre was an ancient Phoenician port city which, in myth, is known as the birthplace of Europa (who gave Europe its name). The name "Tyre" means 'rock'. Anciently, the city consisted of two parts, the main trade center which was on an island, and 'old Tyre', which was located about a half mile opposite on the mainland. 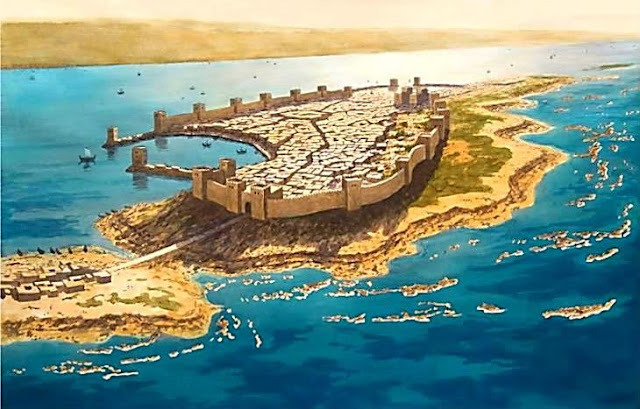 The old city, known as Ushu, was founded c. 2750 BCE and the trade centre grew up shortly after. In time, the island complex became more prosperous and populated than Ushu and was heavily fortified.

Ezekiel foretold that Tyre's mainland would be destroyed by Nebuchadnezzar (Ezekiel 26:7-9). This prophecy was literally fulfilled in 573 BC.

The prophet said, in 590 BC, that Babylonian king Nebuchadnezzar would destroy the mainland of Tyre. Four years later, the Babylonians began a 13-year siege of Tyre. It lasted from 586 BC to 573 BC. (Alexander the Great later destroyed the island portion of Tyre, in 332 BC).

"For this is what the Sovereign Yahweh says: From the north I am going to bring against Tyre Nebuchadnezzar king of Babylon, king of kings, with horses and chariots, with horsemen and a great army. He will ravage your settlements on the mainland with the sword; he will set up siege works against you, build a ramp up to your walls and raise his shields against you. He will direct the blows of his battering rams against your walls and demolish your towers with his weapons."

NIV Footnote: [1] Hebrew Nebuchadrezzar, of which Nebuchadnezzar is a variant; here and often in Ezekiel and Jeremiah. 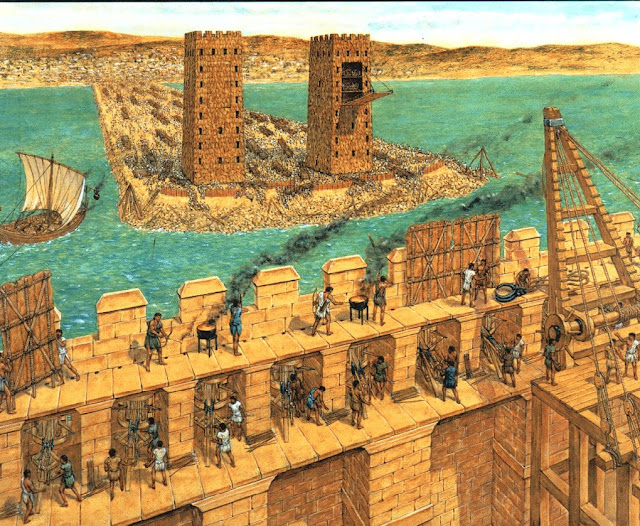 In Amos 1:9-10, the prophet said that God would cause Tyre's protective fortresses to fail, as punishment for the way that Tyre treated Israel. That prophecy was fulfilled in 586-573 BC when Babylonian king Nebuchadnezzar attacked the mainland of Tyre, and in 333-332 BC when Alexander the Great conquered the island of Tyre. Alexander's army built a land bridge from the mainland to the island so that they could use a battering ram to break through the island's fortress.

Amos 1:9-10 (NIV):
This is what Yahweh says: "For three sins of Tyre, even for four, I will not turn back My wrath. Because she sold whole communities of captives to Edom, disregarding a treaty of brotherhood, I will send fire upon the walls of Tyre that will consume her fortresses."

In Ezekiel 26:12, the prophet said that Tyre's stones, timber and soil would be thrown into the sea. Ezekiel's prophecy accurately describes how Alexander the Great built a land bridge from the mainland to the island of Tyre, when he attacked in 333-332 BC. Alexander's forces took rubble from Tyre's mainland and tossed it - stones, timber and soil - into the sea, to build the land bridge (which is still there).


They will plunder your wealth and loot your merchandise; they will break down your walls and demolish your fine houses and throw your stones, timber and rubble into the sea.


Tyre would lose its power over the sea

In Zechariah 9:3-4, the prophet said that the Phoenician city of Tyre would lose its status as a powerful nation on the Mediterranean Sea. Today there is a city called Tyre that is either on, or near, the original Phoenician site. But this Tyre is a small city in modern-day Lebanon. It is certainly not the powerful nation that it was in the days of Zechariah.

Zechariah 9:3-4 (NIV):
"Tyre has built herself a stronghold; she has heaped up silver like dust, and gold like the dirt of the streets. But Yahweh will take away her possessions and destroy her power on the sea, and she will be consumed by fire."

With this historical backstory in place, we are ready for tomorrow's reading in Ezekiel, which will be about the King of Tyrus...  Whom we need to identify, as this prophecy bears tremendous End-time significance...  More tomorrow...
at December 17, 2017 No comments: