Besides the morning and evening offerings, typically presented each day in the sanctuary, a large number of sacrifices were offering during the eight days of Tabernacles. You can find the list of animals sacrificed in Numbers 29.

More sacrifices were offered during Tabernacles than all other festivals combined. During the eight days of this feast, there were a total of 189 animals offered. Obviously, if the message in these sacrifices was only and simply that Yahshua would die, there would be no point to this volume nor in such a diversity of kinds of animals sacrificed. There must be more meaning. And there is!

First we find a beautiful pattern of sevens. Seven is the number of Yahweh’s perfection.

No matter how the list of sacrifices are counted, the group is always divisible by 7.

And all these offerings were presented in the SEVENTH month.

On the first day of the Feast of Tabernacles a total of 30 animals were sacrificed. Thirty is a significant number in Scripture. In Exodus 21:32, we find that 30 pieces of silver is the ransom price of a slave.

Yahshua was also sold for 30 pieces of silver. In essence, the Son of God - the most expensive Gift in the universe - was given as a ransom for His servant bride.

In Hebrew gematria (numbers have spiritual meaning), the number 30 means "to teach" and "to learn". These skills are both needed by Yahshua's Bride.

The Brazen altar where the animals were sacrificed also had meaning. It was made of acacia wood – which is flammable. In our mortal state, the Presence of Yahweh is a consuming fire which we could not endure.

The altar is covered with brass, making it no longer flammable. We must be hidden in Christ to become inflammable.

The horns show the strength and power of the sacrifice 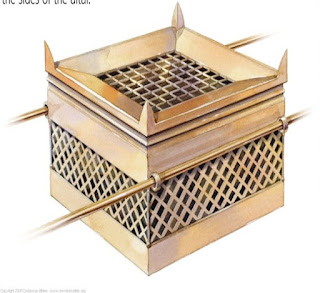 Yahshua made for us.

The altar was elevated signifying that it was approaching God.

The Fire which lit the altar had fallen from Heaven – coming directly from God. This is like the Lake of Fire in Revelation.


Either we will have the sin burned out of us now, and be covered with the glorious robe of Yahshua, or we will be burned with our sins later.

The bull was the most expensive animal to offer. On Tabernacles there were a total of 70 bullocks offered.


This showed that the sacrifice of Yahshua was the most valuable Heaven had to offer. For God so loved the world that He gave... John 3:16 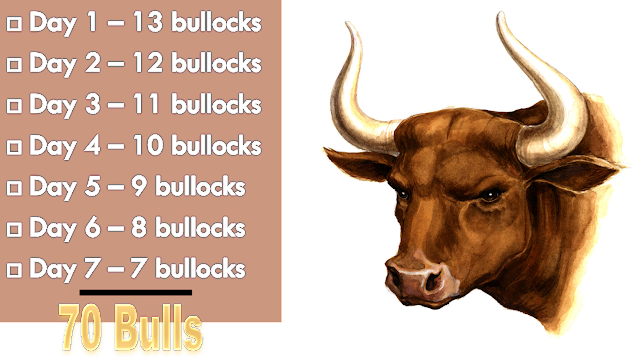 Spiritually, all who accept Yahshua as their Saviour become Abraham’s seed and heirs according to the promise, as it says in Galatians 3:29. If we are Abraham’s seed, then we are spiritually considered to be of the loins of Jacob.


In Exodus 1:1-5 The Bible tells us that all the souls which came from the loins of Jacob were 70...

So, God divided the world into 70 nations after the flood and Babel. Thus, the offer of 70 bulls showed that Yahshua’s sacrifice would be enough to save ALL the nations if they would only come to Him.

This also fits with the Harvest theme of this Feast. For the Feast of Tabernacles represented the gathering in from ALL nations.  It points to the great ingathering at the end of the world, after the gospel has been preached to every nation, kindred tongue and people.

At Tabernacles, there were also 2 rams offered.

This sacrifice points to God Himself, the guardian and protector of the flock. As Abraham said in Genesis 22:7-13, “God will provide Himself a Ram…”

The shofar was made from the horns of the ram – proclaiming the "horn of salvation.” As it says in Genesis 22:13, the sound of the Shofar is a call to repentance, to do battle against the Enemy, or to assemble to be instructed. This offers more layers of meaning to the ram sacrifices.


A Ram was also sacrificed for a peace offering, as it says in Numbers 6:17.

Now what is the significance of 2 rams being offered at tabernacles? – Remember, a ram means "mighty men" "righteous" – the two point to the Two Witnesses.


Two Witnesses have many applications, but first and foremost, this points to the two Witnesses from Heaven:

I am one that bears witness of Myself, and the Father that sent Me bears witness of Me. John 8:17.
There were 14 lambs offered on seven days, making a total of 98 lambs offered during Tabernacles (see Numbers 29:13). 98 is the number value of “Tabernacle”.  In Hebrew Gematria, 98 means “The righteousness of saints, to search for insights of Yahweh,” Finally, the number 98, literally means “pardon.”

The lamb as an offering pointed to Yahshua’s purity and innocence. And that we could be fully pardoned because of His death in our place. Not only were we to be pardoned, 98 also points to Tabernacle. God would Tabernacle with and in us.

Last, let’s talk about the single kid goat sacrificed during Tabernacles. As we can see plainly in the Day of Atonement, the goat is a representation of sin and Satan.

The goat also points to the One who would come in the likeness of sinful flesh to condemn sin for us as it says in Romans 8:3.  Then again in 2 Corinthians 5:21, we find that Yahshua was made to be sin for us.

The word “goat” is translated from the Hebrew word sa iyr meaning “hairy, devils, satyrs.” The Hebrew number value for the word goat is 580. This means “your curse and rebellion.”


This brings to mind the beautiful promises in Galatians, where we find that Yahshua hung on the Cross taking our curses from us.

Summary of the Spiritual Lessons in the Tabernacles Sacrifices:

THE ALTAR  - Let’s start with the Altar of Burnt Sacrifice, which stood in the Tabernacle courtyard. This was where the Feast of Tabernacles sacrifices were offered.

The Brazen altar was made of acacia wood – which is flammable. In our mortal state, the Presence of Yahweh is a consuming fire which we could not endure. But, the altar is covered with brass, making it no longer flammable. We must be hidden in Christ to become inflammable.

The fire on this altar was started by Yahweh. It was a Heaven fire.  The next Heaven fire will be Pentecost. And when the living sacrifice of our lives is acceptable, Yahweh will send the fire! If we are not hidden in Christ through being made acceptable in this first end-time fire, we will be consumed by the Heaven fire called the Lake of Fire at the end.

Thus, we find that this altar teaches us about the importance of getting rid of sin. Sin is going to burn. We will either let the Holy Spirit burn the sin out and make us acceptable – covered in Yahshua – now, or we will burn with our sin later.
THE NUMBER 7 - Now, let’s turn our attention to the number seven. As we have already discussed the amount of animals sacrificed is always divisible by 7.

And all these offerings were presented in the SEVENTH month.
THE NUMBER 30 - On the first day of the Feast of Tabernacles, there were a total of 30 animals sacrificed. 3 is the number which represents Yahweh’s Covenant made to “Abraham, Isaac and Jacob.” Ten is the number of Yahweh’s Law, as there are Ten Commandments, which are the main categories under which all the statutes are arranged. Thirty is 3x10 showing the Covenant is made to Law Keepers. As Yahshua said, “…If ye were Abraham's children, ye would do the works of Abraham” (John 8:39).

In Exodus 21:32, Leviticus 27:4, we find that thirty is associated with payment for a slave and a woman. This is significant because we, who have been slaved to sin, are ransomed back to become the Bride of Christ.  This number was not only shown in our ransom price at Tabernacles, it was also the amount of silver for which Yahshua was sold.

THE NUMBER 70 -  There were a total of 70 bulls offered during the Feast of Tabernacles.

When we accept Yahshua as our Saviour we become Abraham’s seed and heirs according to the promise (Galatians 3:29). This makes us spiritually of the loins of Jacob.

God divided the world into 70 nations. The offer of 70 bulls showed that Yahshua’s sacrifice would be enough to save ALL the nations if they would only come to Him.

THE NUMBER 2 - There were two rams offered during Tabernacles. Two is the number of establishment. In the mouth of no less than two witnesses, a matter is established, or considered a credible fact. This was the promise that salvation was assured to all who came to Yahshua.

SPIRITUAL MEANING OF A BULL SACRIFICE - The sacrifice of the bull showed that Heaven spared no expense in offering us salvation. And the fact that there were 70 bulls offered during Tabernacles was to give some concept of just how lavish was Heaven’s offering so that All Nations could have Eternal Life.

SPIRITUAL MEANING OF A RAM SACRIFICE - The Ram is a symbol of Yahshua as the protector of the flock.  It was a reminder that Yahweh would fulfill His promise to Abraham, “God Himself shall provide a Lamb” – and immediately a ram was supplied in the thicket.

SPIRITUAL MEANING OF A LAMB SACRIFICE - The offering of the Lambs pointed to the perfection and innocence of our Saviour. It showed that Yahshua would become one of us, who are Yahweh’s sheep. Yet, He was a Sacrifice without blemish.


SPIRITUAL MEANING OF A GOAT SACRIFICE - The goats offered at Tabernacles showed that Yahshua took our ugliness and sin upon Himself. The goat is the symbol of sin and satan. Yahshua died to gain victory over and destroy the goatishness in us.