Having done a four-day segment on the paganism behind Christmas, a question naturally comes up...  So, since we know Yahshua wasn't born on December 25, when was He born?

And ye shall keep it a feast unto Yahweh seven days in the year. It shall be a statute for ever in your generations: ye shall celebrate it in the seventh month."

The Feast of Tabernacles (Sukkot) takes place every year in the Fall (in the northern hemisphere). This Feast starts on the 15th day of Tishri (the 7th Biblical month, which is September-October on our modern calendars).

Sukkot lasts seven days (Tishri 15-21). But the eighth day is also an annual Sabbath, which was called the "Last Great Day" (John 7:37). by the Hebrew people. Similarly to how Passover sits next to the Feast of Unleavened Bread, but technically isn't a part of it; so also the Last Great Day sits next to the Feast of Tabernacles, but is actually its own, separate Feast Day. 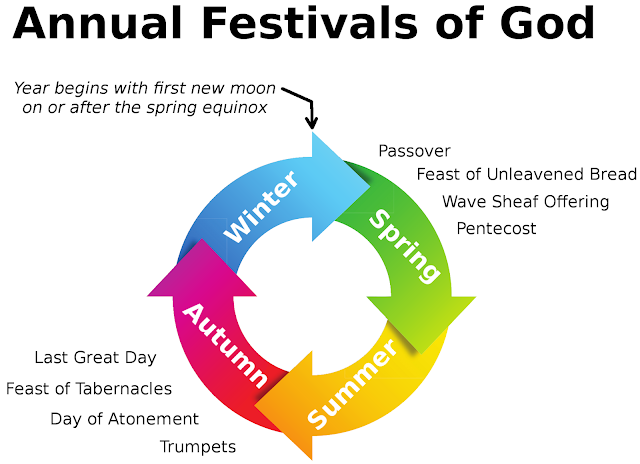 As Scripture shows, Yahshua was born on the first Sabbath of Sukkot (Tishri 15) and was circumcised on the 8th day (which would have been the Last Great Day). So, how do we arrive at Sukkot being the time of Yahshua’s birth?

Scripture tells us that John the Baptist was exactly 6 months older than Yahshua. Thus, by determining the timing of John's birth, we may calculate Yahshua's.

We are able to determine that Yahshua’s cousin, John the Baptist was conceived in mid Sivan on the Biblical Calendar (which is in May/June on a modern calendar) and born 40 weeks later on the Passover, which is on the 14th of Abib (the first Biblical month of the year, which falls in April/May). How can we know this, Scripturally? Consider the following:

Yahshua was conceived during Hanukah and born 40 weeks later at the start of Sukkot. 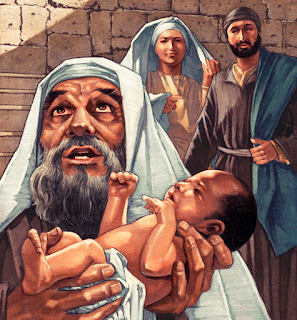 On this day, the Hebrew people complete their annual cycle of Torah readings and start again from Bereshit (Genesis). Therefore Simchat Torah is considered by the Jews to be a time of “fulfillment” of the Torah. The circumcision of Yahshua at this time indicates how He had come to fulfill (fully keep) the Law (Torah) and the Prophets (Matthew 5:17-18).

Additional Evidence That Yahshua was Born on Sukkot:

It's interesting to recall also that Yahshua referred to Himself as Yah's Temple - His Tabernacle. He said that if "this Temple" was destroyed, He would raise it again in three days. And the Temple (Tabernacle) He was speaking of was His Own Body.

Finally, and I share this only as an interesting additional note, since this is historical... there may be evidence that the early Jewish believers commemorated Christ's birth at Sukkot.

In the story, the notable sages of the day are distressed by the number of Nazarenes among the Jewish people, and they are eager to find a way to easily distinguish between believers in Yahshua and other Jews. The story is set in the mid-apostolic era (circa 60 AD), but in reality, it better reflects second- and third-century interactions between Jewish believers and the larger Jewish community.

This story offers a glimpse of the sect of the Nazarenes from the perspective of mainstream Judaism. It attests to a collective, community memory of the Nazarene believers as Torah-keeping Jews who, at one time, were virtually indistinguishable from the rest of the Jewish community. The legend also tries to explain the evolution of Christianity as an anti-Jewish religion outside of Torah observance.

In the legend, the sages try to steer the believers away from keeping the three pilgrimage festivals: Passover, Pentecost, and Tabernacles in the same manner as the rest of the Jewish community. They accomplish this by encouraging the believers to focus on the Messianic significance of each festival, distancing them from mainstream Judaism, but in an acceptable way, since it was connected with Yahshua of Nazareth. The sages proposed the following to the Torah-keeping, Messianic Jews:

The fictitious story attempts to credit the leadership of the Jewish community with the creation of Christianity, but what kind of Christianity is this? Church history tells us that second-century Christians (the so called Quartodecimans) did observe the day of the Master’s death on Passover (Abib 14)...

The story remembers a time when believers still kept the Biblical festivals but attached Messianic significance to their observance of the Jewish holy days. Since the believers in the story are Jewish, the legend may provide us a glimpse of the early Jewish believers celebrating the Master’s birth at the festival of Sukkot.