In Genesis 3:15, we find the first mentioning of the Plan of Redemption. But to understand the full scope of what God is promising to do, in this verse, we need to understand what each part means.

There are characters mentioned in this verse. To understand the promise, we need to identify the characters:

The Serpent - Satan took the form of a serpent. For this reason the serpent, in this verse, is a reference to the devil.

Revelation 12:9  - "And the great dragon was cast out, that old serpent, called the Devil, and Satan, which deceiveth the whole world: he was cast out into the earth, and his angels were cast out with him."

The Woman - The woman, of course, is Eve. But, as she is the mother of all humanity, we are all included in this reference to her.

The Woman's "Seed" - We are all the "seed" (descendants or children) of Eve, but there is a more specific reference intended here. One Person, of all Eve's children (humanity) would be The Seed - the One Who would ultimately crush the serpent's head. That One is Christ. The Messiah is the ultimate "Seed" of the Woman, referenced in Genesis 3:15.

Romans 1:3 -  "Concerning his Son Jesus (Yahshua, was His original Name in Hebrew) Christ our Lord, which was made of the seed of David according to the flesh." (Of course, David's seed is all descended from Eve).

The Serpent's "Seed" - The seed of the serpent is his "fruit" - his unholy character qualities and rebellion against God. When the devil's unholy character qualities are in us, we have the seed of Satan in us. But, through Messiah's Sacrifice and indwelling Power, we are transformed. As the Spirit of God dwells in us, His Fruit (Galatians 5:22-23) - or spiritual seed - is produced in our lives. With the Presence of  the "seed" (His Characteristics) of God in us, we become the spiritual seed (children) of God. In this process, the seed (works of the flesh) of Satan are destroyed in us:

1 John 3:8-9  "...For this purpose the Son of God was manifested, that he might destroy the works of the devil. Whosoever is born of God doth not commit sin; for His seed remaineth in him: and he cannot sin, because he is born of God."

Now, having looked at the entities involved in this prophecy, we are ready to glean the fuller meaning of Genesis 3:15, the first mention of the Plan of Redemption in the Bible.

Genesis 3:15 "And I will put enmity between thee and the woman, and between thy seed and her seed; it shall bruise thy head, and thou shalt bruise his heel."

The word "enmity" in this verse is translated from the Hebrew word אֵיבָה ('êybâh), which means "hostility and hate". It is from the root word which means "to be of an opposite tribe". In other words, God is promising to put hostility and hatred for evil in the hearts of His children. In us, He has promised to divorce us from our attraction to the works of the devil and to make us the children of the opposite tribe - the Family of God!

In Genesis 3:15, God also warns that Satan will "bruise" Messiah's "heel".  We can immediately recognize that this is a poetic phrasing which represents the Saviour's Sacrifice, dying for your sins and mine. But there is actually a lot more to this statement than immediately meets the eye. To find the deeper meaning, we need to look at these words in a Strong's Concordance. To "bruise" means to "break" or "cover". "Heel" means "track" or "foot step". Actually, with these meanings, we can see that what is being said here is that the devil will bruise the Saviour's Heel by covering His tracks, obscuring His "foot steps" from view.

Scripture tells us that Messiah is our Example in all things and that we are to faithfully follow "in His Steps":

1 Peter 2:21  "For even hereunto were ye called: because Christ also suffered for us, leaving us an Example, that ye should follow His Steps."

Christ's Life is an Example for us. This means that we are to live as He lived. By His Grace, we are to follow in His Steps, living according to His Pattern. Being Christian means living by the motto, "What would Jesus (Yahshua) do?"

But, just as we were warned the serpent would do (in Genesis 3:15), the enemy has bruised the Saviour's "Heel". This not only refers to the fact that our Saviour would die for our sins, taking the sting of Death in our stead, it also means that the serpent would bruise His Heel by covering over His foot steps. The enemy has worked to obscure the Messiah's Life, Teachings and Purpose. And in so doing, society has largely lost the Saviour's Example and is unable to follow in the Life-prints He left behind.

But the prophecy doesn't end with the devil winning in this insidious manner. God also tells us that the Seed - the Saviour - will "bruise" the serpent's head. Everyone knows that if you want to kill a snake, you crush its head. This foretold head injury is a fatal one.

The prophecy of Genesis 3:15 is also portrayed in the stars. The original constellation names and star names were given by God Himself (Psalm 147:4-5, Isaiah 40:26). It was He, not the pagan Greeks, who gave the stars their constellation shapes and assigned their meaning to tell His Plan of Redemption in the Stars (Psalm 19:1-3). 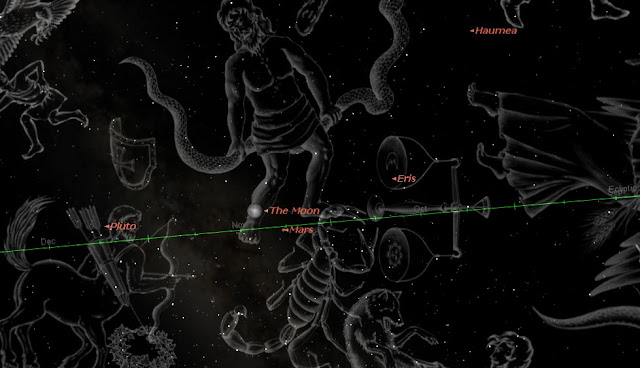 In the star picture, the Strong Man - who anciently represented Christ (Yahshua Messiah), not a Greek false god - was shown wrestling the serpent, on our behalves. 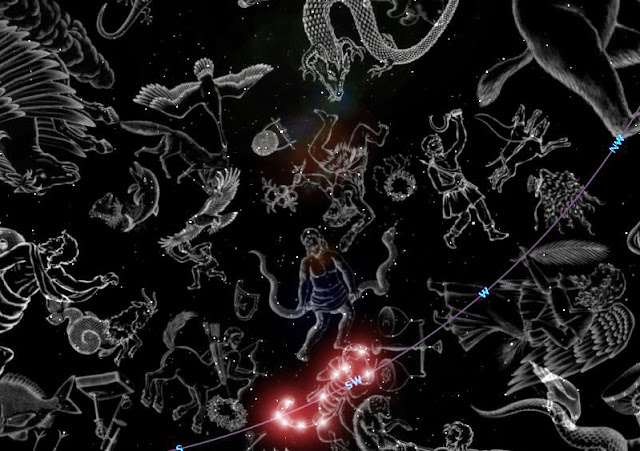 Beneath his foot is a stinging scorpion - a symbol of Eternal Death (1 Corinthians 15:55-56). The scorpion of Death is swinging his stinging tail up to catch the Strong Man in the heel - just as the Bible foretells in Genesis 3:15. 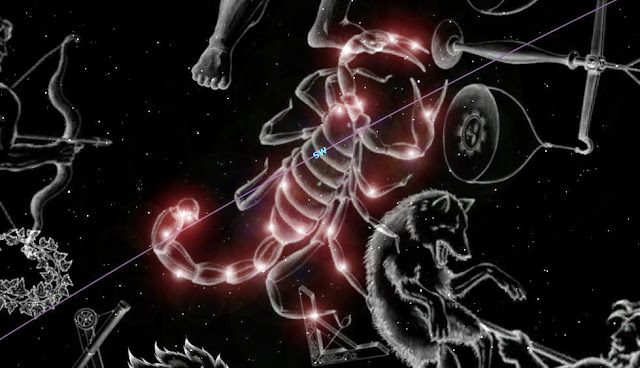 The rest of the Genesis 3:15 prophecy is also shown in the star picture. In a neighboring constellation, the same Strong Man (our Saviour) is shown doing battle with some fruit (representing the Works of the Flesh - Galatians 5:16-21 - which are the characteristics, the fruit, the spiritual seed of Satan). In addition, the foot of the Strong Man is stepping on the serpent's head, preparing to give it a crushing and fatal wound. 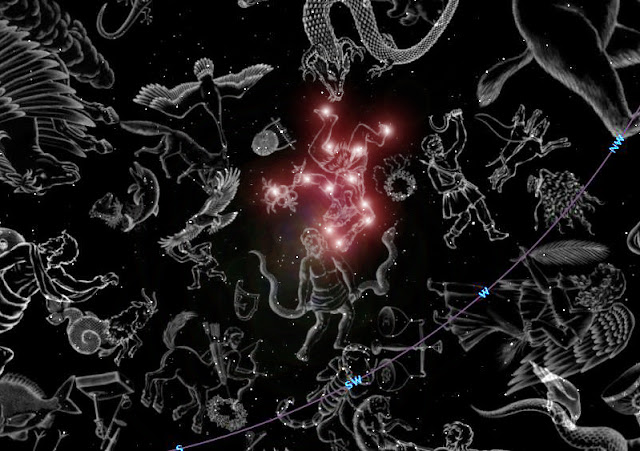 Genesis 3:15 is a powerful Promise that Almighty God will defeat the devil, destroying his unrighteous character traits and fleshly works, in addition to ultimately defeating the destroyer. But there is a more personal side to the promise. God will put "enmity" in His people - not enmity against people - but enmity against the devil's temptations and destructive "delights".

Genesis 3:15 "And I will put enmity between thee and the woman, and between thy seed and her seed; it shall bruise thy head, and thou shalt bruise his heel."

Today, when you pray, I encourage you to ask God to put enmity between you and the Works of the Flesh.  Ask Him to fulfill His Promise in Genesis 3:15 by making the enemy's enticements appear as they truly are - disgusting, evil, and hateful. And, as He puts enmity between you and the serpents seed, you will find the personal fulfillment of the powerful promise found in Genesis 3:15.