In Exodus 15, we read about Israel's trial with the bitter water at Marah, followed by their period of rest and sanctuary at Elim. But, for today, I'd really like to focus on Elim, as I find its message very encouraging and I think you might also.

Weary travelers have long found relief from the swirling sands, under the palms of desert oases. An oasis not only offers physical restoration for thirsty wanderers, it also serves as a metaphor of the restful experiences which Yahweh provides for His people. Time and again exhausted saints have been given interludes of relief, even in the midst of trying circumstances. I know I've experienced these much needed respites from our loving God! Haven't you? The encouraging news is that it is a Promise of God that He will not only test His people, bringing them opportunities for character development, but He will also provide us with needed rest - especially when we need it most.


Matthew 11:28-30  "Come unto Me, all ye that labour and are heavy laden, and I will give you rest. Take My Yoke upon you, and learn of Me; for I Am meek and lowly in heart: and ye shall find rest unto your souls. For My Yoke is easy, and My burden is light." 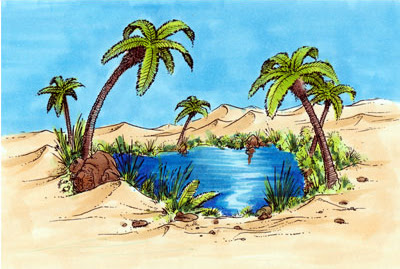 The beautiful message of Elim is God's Promise to provide spiritual oases amidst deserts of trials. One example of such an experiential oasis took place in Europe, within the last century. Cornwall, England was a land of suffering and sorrow during the second World War. Food became scarce and many imported fruits, like pineapples and bananas, vanished completely from the countryside.  Tired from the trials of war and its deprivations, two small children pleaded with their mother to let them pray and ask Yahshua to send them a banana.

“Couldn’t Jesus (Yahshua) send us one, even though there is a war?” asked little Bob.

“Of course He could,” Mother slowly responded, worrying how she could keep her children’s faith strong if the desired banana didn’t materialize. “But He does not always do exactly what we ask because, well... After all, a banana isn’t a necessity, and Jesus (Yahshua) is sending us all the food we actually need.”

But, in spite of Mother’s cautions, Bob and Lamorna prayed faithfully for a banana. Night after night, week after week, they asked God for the desired fruit. Knowing their prayer, Mother searched the shops near and far. But no bananas were to be found in the land.

Then one day a special package arrived addressed to the children. The mysterious box, sent by their auntie, bore only two words, “Guess what?” Inside the children found a single banana.

But just at that moment, Mother thought she noticed a shadow pass over Lamorna’s young face. “What’s the matter dear?”

“Well, you see Mamma, while we asked Jesus (Yahshua) for a banana, we kind of hoped that He might send us each one.”

“Don’t be so ungrateful!” Mamma admonished quickly pointing out that this one banana might well be the only one left in all of England.

“I’m not ungrateful,” Lamorna assured her mother, “We just hoped, that’s all.”

Mother took the banana and peeled back the skin for the children. To their amazement and even greater joy, inside the skin of what looked like a single banana, there were two separated bananas! It was a twin banana. Yahshua, Who loves to grant us the desires of our hearts (Psalm37:4) had given the children one banana each. 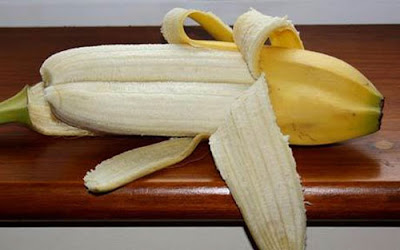 This is the kind of loving and merciful God we serve. He is the One who paints rainbows of promise amid threatening storms. He gives us moments of rest and encouragement in times of trial and hardship.  Such experiential oases are not isolated incidents. Numerous followers of Yahweh have found moments of miraculous refreshment and peace to relieve the bitterness of trial. Angels have visited the persecuted, lighting up their prison cells; banquets have been served to the hungry faithful in deserts of deprivation; and twin bananas have been provided for praying children even in a war-torn land.

Such was the Children of Israel’s experience when they arrived at the lovely oasis of Elim. It was a joyous place of peace and plenty, a spot to recuperate from the difficulties they had gone through. It afforded an opportunity to recharge, strengthening the Israelites to face what still lay ahead.

“Elim,” was the second recorded campsite, after Israel  crossed the Red Sea. The name means “ram, strong, stag.” or "Terebinths, trees," (Exodus 15:27, Numbers 33:9). Some give the meaning of "Elim" as "strength," or "God's strong angels." All agree, however, that Elim was the place of strengthening after the Marah trial.

Israel’s fifth campsite since Egypt, Elim’s numeric order also lends depth to its significance. Five is the number associated with the "Spirit bringing a window of insight."  Certainly, the Children of Israel needed a major lesson in spiritual “sight,” after their failure at Marah. 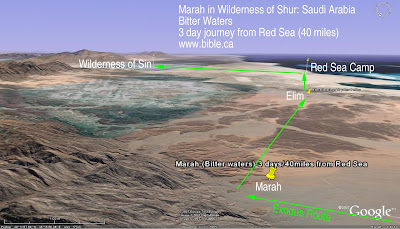 Elim was a delightful place which offered twelve springs of water and was graced with seventy palm trees.  Remarkably, Elim was only a morning's jaunt from Marah. Yet, the bitterness of Marah was forgotten by the sweetness of Elim.

Here they camped for about a month regaining their strength for the journey ahead. In Elim, God had supplied "rest for their souls," just as He continues to do for His Children, (Philippians 4:19).

Even now this valley of Elim, watered by a perennial stream, has rich pasturage for cattle, and many shrubs and trees. Here, and in the surrounding area, the flocks and herds would find good sustenance, and the people, rest.

Some regions are renowned for rapid weather changes. The locals say, “if you don’t like the weather, just wait a few minutes.” Similarly the circumstantial changes God’s people experience can move from stormy trial to rainbows with head-spinning rapidity.  From crisis to comfort, from suffering to smiles; we read of Israel’s refreshment; and we, too, are encouraged by Elim.

And they came to Elim, where were twelve wells of water, and threescore  and ten palm trees: and they encamped there by the waters, Exodus 15:27. 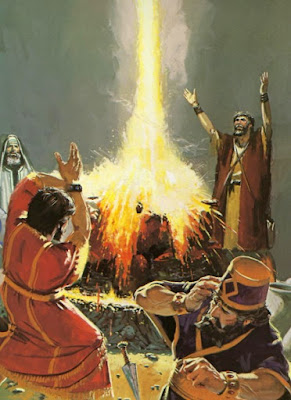 Elim is God's Place of encouragement for His weary children. One of the best illustrations of how God grants us Elim moments is found in the story of the prophet Elijah. The Bible tells us about the amazing victory which God worked through Elijah to accomplish on Mount Carmel. In the aftermath, some 900 leaders of Baal worship were slain and the land of Israel was restored to worshiping God.

When the wicked queen Jezebel learned what Elijah had done to her Baal prophets, she vowed to kill him. Discouraged, Elijah fled for his life, running about 80 miles southward to Beersheba. There he collapsed under a tree and prayed for God to let him die!

How dramatically things had changed in the life of this faithful man, who had been so mighty for God just days before. Thankfully, God did not grant Elijah's prayer request-which was unusual. Remember, Elijah was the man who prayed and Fire fell from Heaven to consume his sacrifice on Mount Carmel. Elijah was the prophet who prayed and a three-year-long drought was ended in answer to that prayer. Elijah was the servant of the Most High who ran faster than king Ahab's chariots, leading the king home out of the thunderstorm, under the unction of Yahweh's Spirit. And now, only a few days later, Elijah was the discouraged man who prayed to die - a prayer request which God did not grant. In fact, Elijah is one of the few people who would actually never die (for he was translated without seeing death). (The story is found in 1 Kings 19) 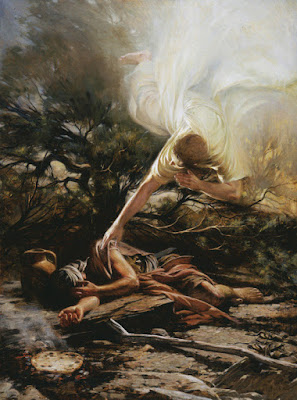 There, under a juniper tree in that desolate area, the exhausted and discouraged Elijah fell asleep. And it was there that God gave the weary man a needed Elim experience. God didn't chide Elijah for becoming exhausted and running away. He didn't criticize him for being discouraged. Instead, we see God tenderly ministering to Elijah's needs through an angel.

Then as he lay and slept under a juniper tree, suddenly an angel touched him, and said to him, “Arise and eat.” Then he looked, and there by his head was a cake baked on coals, and a jar of water. So he ate and drank, and lay down again.

And the angel of the Lord came back the second time, and touched him, and said, “Arise and eat, because the journey is too great for you.” So he arose, and ate and drank; and he went in the strength of that food forty days and forty nights as far as Horeb (also known as Mount Sinai), the mountain of God.

What a wonderful God we serve, Who gives us encouragement that we will be strengthened. There are moments of rest amidst the storm. So, just in case you've been going through a difficult trial, I'd like to share some Elim encouragements:


Hebrews 3:13 "But exhort (encourage) one another daily, while it is called To day; lest any of you be hardened through the deceitfulness of sin."

1 Thessalonians 5:11  "Wherefore comfort yourselves together (encourage one another), and edify one another (build each other up)..."

John 16:33 "These things I have spoken unto you, that in Me ye might have peace. In the world ye shall have tribulation: but be of good cheer; I have overcome the world."

Romans 8:35-39 "Who shall separate us from the love of Christ? Shall tribulation, or distress, or persecution, or famine, or nakedness, or peril, or sword?  As it is written, For Thy Sake we are killed all the day long; we are accounted as sheep for the slaughter. Nay, in all these things we are more than conquerors through Him that loved us. For I am persuaded, that neither death, nor life, nor angels, nor principalities, nor powers, nor things present, nor things to come,  Nor height, nor depth, nor any other creature, shall be able to separate us from the love of God, which is in Christ Jesus (Yahshua) our Lord (Master)."