One of the most amazing experiences in the Bible is found in today's chapter, Genesis 22. It is the story of how God tested Abraham, by commanding him to
sacrifice his own son, Isaac. Can you imagine it?! A loving father, who absolutely dotes on his precious son, climbing the mountain knowing that every step brings them closer to the appointed place where he must take his son's life. Behind him follows a devoted young son, obediently carrying the wood of the sacrifice. Isaac trusts God and his father. What a testimony! One's heart skips a beat in the reading of it. 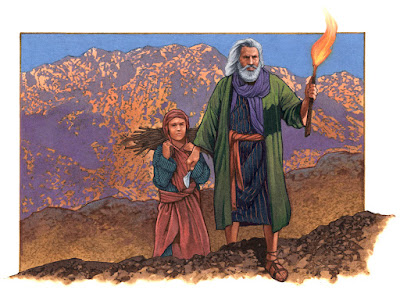 But there is much more going on in this story, than meets the eye. The unstated elements of the account are as vital as those which are written. And within the narrative, we see a future prophesy, powerfully being enacted, that we might better comprehend and appreciate the Plan of Redemption.

Unbeknownst to him, Isaac is a living shadow-picture of Messiah Himself. To fully see this prophetic shadow-picture, consider the following (quoted from Oxford Bible Church - quote is indented)

Genesis 22:3: “So Abraham rose early in the morning and saddled his donkey, and took two of his young men with him, and Isaac his son; and he split the wood for the burnt offering, and arose and went to the place of which God had told him.”

Abraham rose early for his 3 day journey. He is an example to us of quick obedience. If you delay to obey, you will either forget, or convince yourself not to do it. He knew that God had spoken, and that God could be trusted. He put aside all his natural excuses, emotions and reasonings. He didn’t let himself dwell in the mental arena, but he brought his thoughts captive to God’s Word.

As they approached from the South, God showed him the Mount by a glory cloud (v2). To obey God, he had to offer Isaac in a specific place. It was essential this was done at the right location, because it would lay the foundation for all future sacrifices, and especially because it was where our Lord Jesus Himself would be offered up 2,000 years later. This was a prophetic picture, that had to be acted out in the very place where Jesus would be crucified.

To Abraham, Isaac had died when God spoke, because he decided then to obey God. Thus he received him back ‘raised’ from the dead on the 3rd day, just like Jesus (Yahshua)! 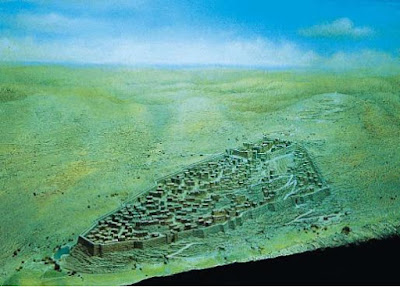 Mt. Moriah is on 3 levels. As Abraham approached from the South, he would have first come to the lower level which was the southern ridge, on which was the town of Jerusalem, where Melchizedek was king.

1000 years later this was a Jebusite City, which David captured and made his capital. It is called the City of David.

Above it, to the right, which is to the North, you can see a higher level of Mount Moriah upon which David’s son, Solomon built the Temple.

How can we know which is the true Biblical Mount Moriah? Ask any observant Jew, and he will tell you where Mt. Moriah is, because it is central to their faith. The Jews have no doubt that Mt. Moriah is same Mount as the Temple Mount in Jerusalem, and in this they are on sure Biblical ground. They consider it the most holy place on earth, the place where Abraham offered up Isaac, the place that God has chosen for Himself.

There is a Plaque erected at the Western (Wailing) Wall of the Temple Compound (below) which confirms the Jewish belief that this is where Abraham offered up Isaac, and where the Temple was built, and that God has chosen this special place to manifest His Glory:

We know where Mt. Moriah is, because 1000 years after Abraham, God revealed to King David that the Temple must be built on Mt. Moriah, the very same Hill where Abraham offered up Isaac. This is why the Temple Mount is the most holy and contested piece of real estate, even to this day.

In 2Samuel 24:16-25, the Angel of Judgement stood by the Threshing Floor of Ornan the Jebusite, on the higher ground (plateau) above the original City of David. He was ready to destroy Jerusalem. God told David to buy this Threshing Floor and build an Altar there, where he was to make atoning sacrifices to turn God’s Judgement away from Israel.

2Samuel 24:24: “So David bought the Threshing Floor and the oxen for 50 shekels of silver.”

Thus, we see that David must have bought the whole Mountain as well as the Threshing Floor, since he realised it was all holy ground.

When David saw that the Lord had answered him on the Threshing Floor of Ornan, he continued to sacrifice there (v28).

Soon after, Solomon built the Temple on this same ground that God had revealed to David as being a Holy Place for Sacrifice:

2Chronicles 3:1: “Now Solomon began to build the House (Temple) of the LORD at Jerusalem on Mount Moriah, where the LORD had appeared to his father David, at the place that David had prepared on the Threshing Floor of Ornan the Jebusite.”

This is the only other mention of Mt. Moriah in the Bible apart from Genesis 22. Therefore, it is crucial in determining the location of Mt. Moriah. Notice from 2Chronicles 3:1 that the Mount where the Temple was built is called Mount Moriah, the very same Mount where Abraham offered up Isaac!

Therefore, if the Bible is to be trusted, Mount Moriah, the Mount where the Lord promised to provide Himself as the final Sacrifice in Genesis 22, is the very same Mount where the Temple was built.

So, in Solomon’s time, there was the City of David, and then above it (to the right in the pictures opposite), stood the Temple on the higher level, which a flat platform top that had been used as a Threshing Floor, for this is where God told David the Altar of the Temple had to be.

The Bible very clearly says that Mt. Moriah is the same Mount upon which the Temple stood. This fact (which is often overlooked) is essential in determining the location of Christ’s Death and Resurrection, as we shall see. 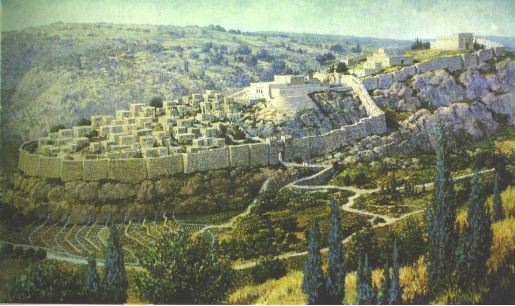 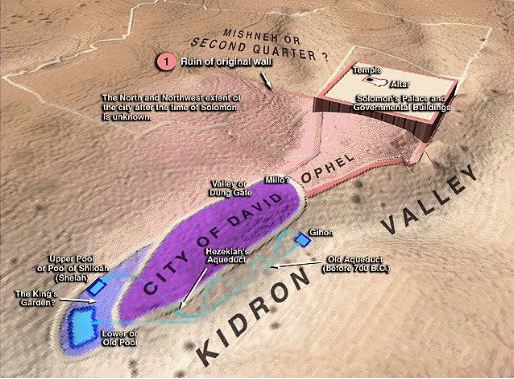 This large scale model of Jerusalem at the time of Christ (below), now at the Israel Museum, shows the view of the Temple from the bottom of Mt. Moriah at the South, as it looked then. 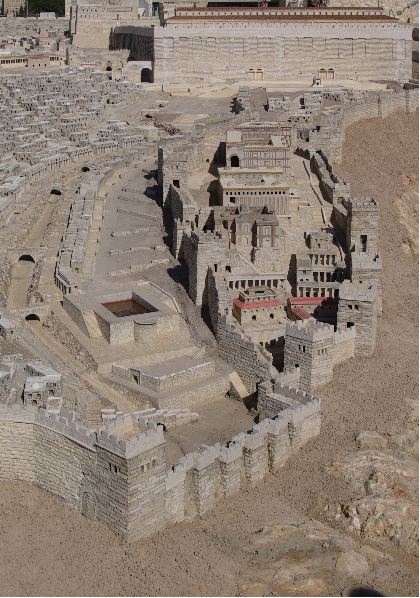 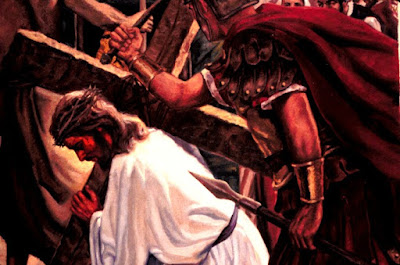 God, Who knows the end from the beginning, had picked this very spot to mark the place where His Temple would stand. He had picked the nearby escarpment as the spot where Christ - Heaven's Ultimate Lamb - would be slain. And it was to this precise location that God called Abraham.

Like Messiah, Who bore the wood of His Sacrifice to the hill of Calvary, Isaac carried the sacrificial wood upon his back. And when Isaac asked his father where the lamb was that would be slain, Abraham spoke a prophecy, which foretold the Death of the Lamb of God, Who takes away the sin of the world. Abraham said, "My son, God will provide Himself a lamb for a burnt offering."

What an amazing picture - painted by God - on a canvas that transcends time... Makes one wonder if Abraham really understood what he was saying and doing...  Hmmm...  I kind of think he did. :-)