The sixth vision of Zechariah is a sobering one, indeed. Careful study of the symbols it contains reveals a picture of an End-Time thermonuclear war.

For a detailed study of Zechariah 5, in context of current events, I invite you to watch my husband's World Watch presentation from May 20, 2017.


But the question that comes to mind is: does Bible prophecy support the idea of nuclear war? I believe it does, considering the sixth vision of the prophet Zechariah, recorded in chapter 5. In this vision, Zechariah saw a flying roll. What? 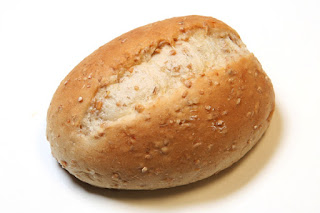 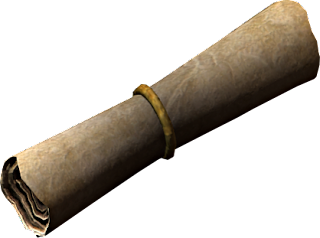 No, Zechariah didn't see flying bread. In Hebrew the word "roll" is "megelot". In other words, Zechariah saw a flying megelot.  The word megelot was the term for a scroll which was rolled up into a single roll, such as was done with the book of Esther. In other words a megelot is shaped like a cylinder, as is in the picture on the right.

This flying megelot has physical dimensions. It brings curse which brings death to the unrepentant and remains behind, even after the megelot has passed.

Zechariah 5:1-4  "Then I turned, and lifted up mine eyes, and looked, and behold a flying roll (megelot). And he said unto me, What seest thou? And I answered, I see a flying roll; the length thereof is twenty cubits, and the breadth thereof ten cubits. Then said he unto me, This is the curse that goeth forth over the face of the whole earth: for every one that stealeth shall be cut off as on this side according to it; and every one that sweareth shall be cut off as on that side according to it. I will bring it forth, saith Yahweh of hosts, and it shall enter into the house of the thief, and into the house of him that sweareth falsely by my name: and it shall remain in the midst of his house, and shall consume it with the timber thereof and the stones thereof."

Zechariah also revealed that the flying cylinder which brings 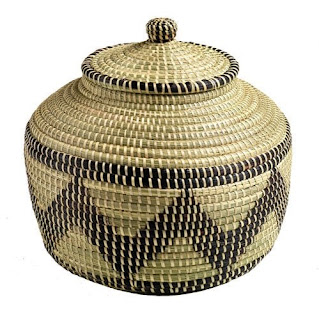 a lingering death curse is also a container. In English, we are familiar with a bushel basket. A bushel of apples is a measurable amount. In Hebrew an ephah is a container which holds a certain amount of whatever it contains. Instead of a bushel basket, its an ephah (see picture on right).

So far, we are seeing a picture of a physical object. It has dimensions. It is a container. And it is an instrument of judgment against the wicked. But things get very confusing in the next few verses, for a mis-translation has made it appear that the container is holding two women. Now we lose all ability to comprehend this vision! It can't be physical if the flying megelot contains two women! 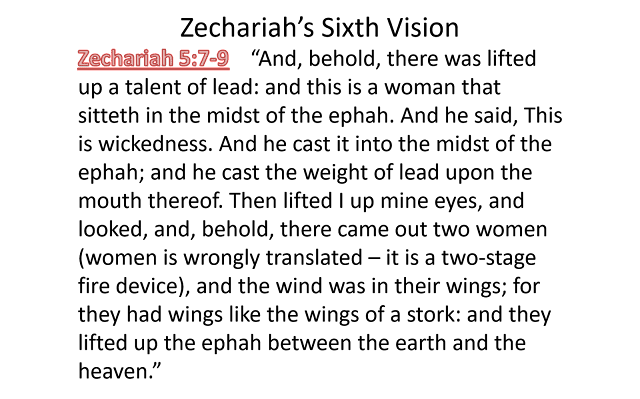 Alright...  maybe a little pun is warranted here. Bear with me while I take a brief "rabbit trail".
As is explained by Yakov Levi in his online article, "A Hebrew Word Picture About Man and Woman in the Essence of Yah", "The Ancient Rabbis taught that when God created man & woman, He placed the letters of His Name (Yah) in our first parents. He placed a Yod (י) in man & the Hei (ה) in woman. That is, He put the Hebrew letter Yod into the Hebrew word for man and He put the Hebrew letter Hei into the Hebrew word for woman. Take a careful look at the graphic below to see what I mean." (Solomon's Porch) 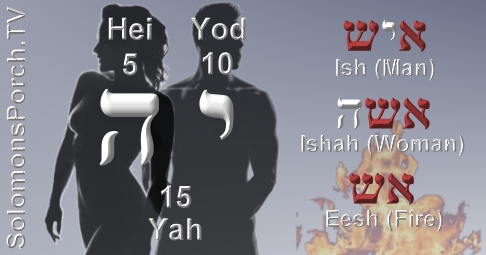 What does this divine picture tell us? When a man & woman lose the indwelling of Yahweh and disconnect from Him, disorder and fighting (fire) happens.

Now, let's get back on topic. Notice that the word for "fire" is just one letter different from "woman"...  As Michael Rood explains in his presentation on Zechariah 5 and thermonuclear war, scribes accidentally added the Hei to the word "fire", in Zechariah 5. This caused the vision to be completely incomprehensible. But, removing the added hei from the passage makes its meaning make sense again.

So, let's review what we've seen so far: 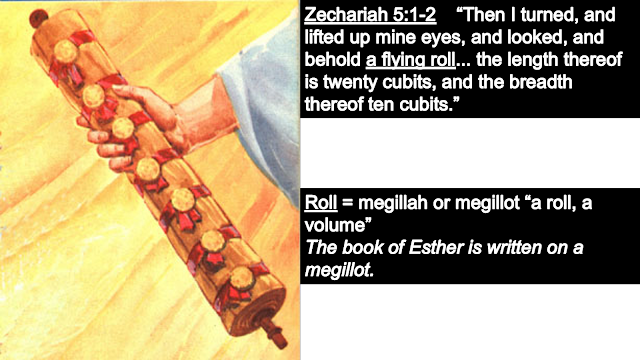 Now, let's take a look at those dimensions. How big is this thing, in modern measurements? 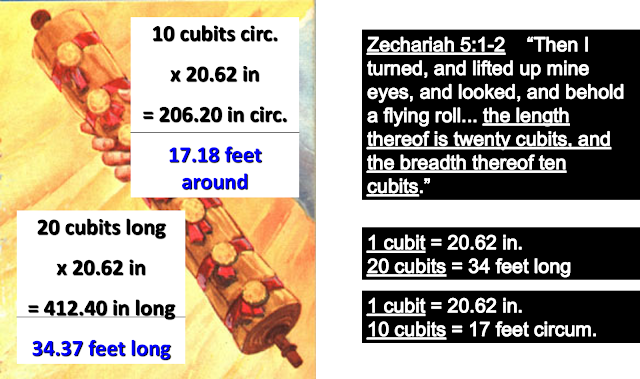 When we translate cubits to modern measurements, we see that this cylindrical container is quite large, which flies and contains two fires (a two-stage fire device):

And it has wings, like a stork...  When we put all of this together, including the wings and ephah with lead (lead is used on nuclear devices), as described in Zechariah 5, this sounds a whole lot like a nuclear warhead. Consider: 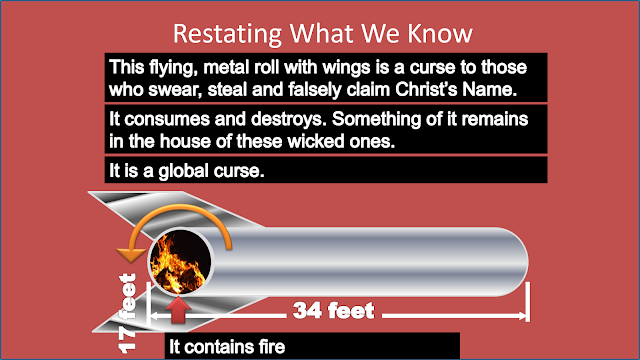 The prophet even appears to describe the effects of radiation, in a later chapter, as follows:

Nuclear radiation does consume away a person’s flesh, just as Zechariah described. 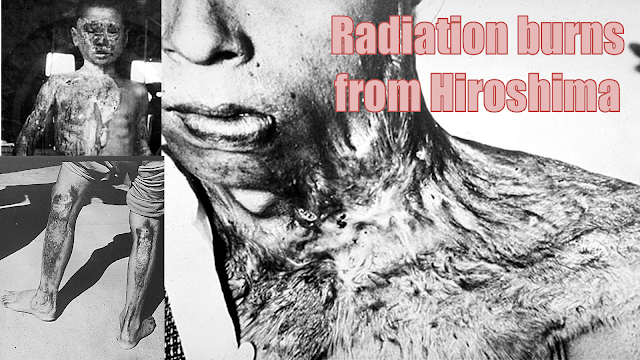 Not only does the prophet Zechariah seem to warn of nuclear war, John in Revelation 9 warned about something that sounds like it also. 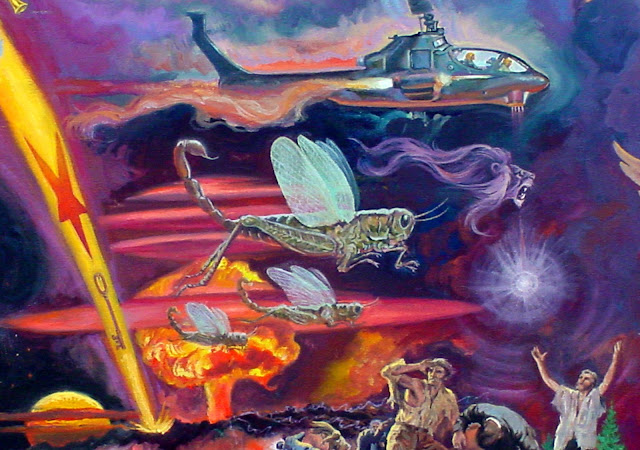 Zechariah forewarned that the cursed megelotwould be based in the land of Shinar.

Zechariah 5:10-11 "Then said I to the angel that talked with me, Whither do these bear the ephah? And he said unto me, To build it an house in the land of Shinar: and it shall be established, and set there upon her own base."

The land of Shinar, according to Scripture (see Genesis 10:9-10), was ancient Babylon, where Babel once stood. Today, this is the location of Iraq and Iran, in the Middle East. 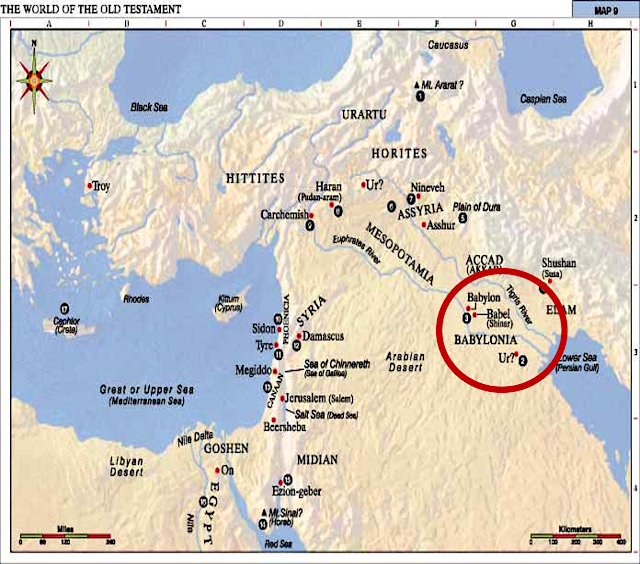 In other words, Zechariah was foretelling of a nuclear warhead, implying nuclear war, which would be igniting in the Middle East...  Wow!

With all that we've seen in Zechariah's fifth vision, I believe it is highly appropriate to conclude with the following reminder from Psalms:

Psalm 91:1-16 "He that dwelleth in the secret place of the most High shall abide under the shadow of the Almighty. I will say of Yahweh, He is my refuge and my fortress: my God; in Him will I trust. Surely He shall deliver thee from the snare of the fowler, and from the noisome pestilence. He shall cover thee with His Feathers, and under His Wings shalt thou trust: His Truth shall be thy shield and buckler.  Thou shalt not be afraid for the terror by night; nor for the arrow (or megelot) that flieth by day. Nor for the pestilence that walketh in darkness; nor for the destruction that wasteth at noonday. A thousand shall fall at thy side, and ten thousand at thy right hand; but it shall not come nigh thee.  Only with thine eyes shalt thou behold and see the reward of the wicked. Because thou hast made Yahweh, which is my refuge, even the most High, thy habitation;  There shall no evil befall thee, neither shall any plague come nigh thy dwelling.  For He shall give His angels charge over thee, to keep thee in all thy ways.  They shall bear thee up in their hands, lest thou dash thy foot against a stone. Thou shalt tread upon the lion and adder: the young lion and the dragon shalt thou trample under feet.

In Zechariah's fifth vision, we do see that dark days are ahead. But, we must never forget Who holds us and in Whom we trust.
at August 19, 2018 No comments: