In 2 Chronicles 7, we find that Yahweh heard Solomon's prayer, and answered it. His promise to Solomon is truly a promise to all of us. In 2 Chronicles 7:14, He says, "If My people, which are called by My Name, shall humble themselves, and pray, and seek My Face, and turn from their wicked ways; then will I hear from Heaven, and will forgive their sin, and will heal their land."

Several years back, during the process of looking for speakers for our Feast retreats, we called Elder Chris Hogan who gives an excellent presentation (with his lovely wife) on how to have a Christ-centered marriage. Chris was unable to join us at the time of the Feast, but could not contain himself and just had to share the exciting story of what God was doing in the island of Fiji.

Elder Hogan and a team of missionaries had gone to Fiji to share with them. During their time there (in May of 2004), they presented the message of 2 Chronicles 7:14.

The people of four churches in the coastal village of Nataleira took it seriously. They truly believed that if they fully repented and turned from their sins, that Yahweh would forgive their sins and would even heal their land.

The land truly needed healing. The village of Nataleira was experiencing a drought. There were also major problems in the island society including: untimely deaths, witchcraft, teenage pregnancy, marijuana usage, and teens were at odds with the elders of the village. As Elder Hogan explained, the stone idols in the village were even speaking to people! Yes, Nataleira was in spiritual trouble - much like any other place on this sin-sick planet. But, the members of the four churches in the village of Nataleira decided to do something about it. They decided to take God at His Word and put 2 Chronicles 7:14 into practice!

All four churches started meeting every evening, repenting of their sin and removing all the articles of their idolatry and sin from their homes. 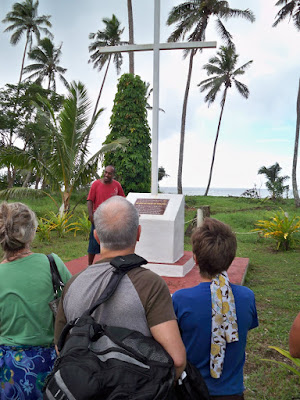 Once the people were no longer under conviction about sins an idolatry which they needed to confess - personally - they began praying for and confessing the sins being committed in their village and on their island. The Presence of Yahweh was restored to the village - and one morning a Pillar of fire fell from Heaven and stood for 30 minutes upon a plot of ground in the village. The people were awed and humbled at the visible sign that Yahweh had heard their prayers! Today there is a beautiful, white cross monument which stands to mark the spot where the Fire stood (pictured on the right).

After that amazing sign, God began working in wonderful ways. large fish returned to the coral reefs about Fiji. Crops were restored. And the coral reefs started to grow again! Yahweh was literally healing the land, just as He promised to do in 2 Chronicles 7:14.

By 2010, the people hadn't stopped praying. Thus, the miracles have continued. By then, over 200 communities had already been transformed by the manifest Presence and Power of God! The transformation of Fiji was occurring at both a national and grass roots level!

Reports from around the nation in these transformed villages are abundant. Entire villages experiencing salvation, dramatic healings were occurring, dead coral reefs were coming to life in 24 hours, polluted water was being healed, barren families were having children, there was spontaneously an abundance of fish which had disappeared for 50 years, police were leading evangelistic crusades, and a unified, praying church has replaced a competitive, bitter division among believers. This was as of our 2010 conversation with this elder!

At the heart of this transformation was a team of young adults who had committed themselves to contending for God's glory to cover their nation. The "Healing the Land Team", was formed to help lead villages across the island nation in a transformational process based on applying 2 Chronicles 7:14!

Now, having heard this amazing and inspiring account, one question probably looms large in your mind: "What's happened to this reformation movement now?" The truth is I don't know the answer. But there is a more important point to consider - if you and I were to put God to the test and practice 2 Chronicles 7:14 in our own areas - would He not restore and heal, just as He promised?

The people of Fiji weren't satisfied to just hear the promise. They acted on it. And the results are breathtaking. Why not put it into practice in your life also?

2 Chronicles 7:14 - "If My people, which are called by My Name, shall humble themselves, and pray, and seek My Face, and turn from their wicked ways; then will I hear from Heaven, and will forgive their sin, and will heal their land."