From today's reading, I'd like to share another principle from the amazing story of Joseph - the concept of vengeance vs. forgiveness. Back in Genesis Chapter 37, we read of deplorable way Joseph's brothers treated him. It was beyond imagination!

Joseph's father asked him to take some provisions and journey to find his brothers, who were tending the family flocks far from home. When the boy obeyed and finally found his brothers, they saw him coming from a distance and plotted to kill him!

When the unsuspecting Joseph reached his brothers, they roughed him up and threw him in a pit. Then they heartlessly ignored his pitiful cries for help and sat down and devoured the provisions Joseph had lovingly brought to them!

Joseph's oldest brother, Reuben, didn't want them to kill the boy. And it was only because Reuben interceded for Joseph that the other brothers didn't kill him outright. But Reuben wasn't strong enough to finish the rescue.  For a reason unexplained in Scripture, Reuben left the scene for a time, with Joseph still down in the pit. Reuben secretly had planned to remove Joseph from the pit and return him home in safety, but Reuben failed to follow through. 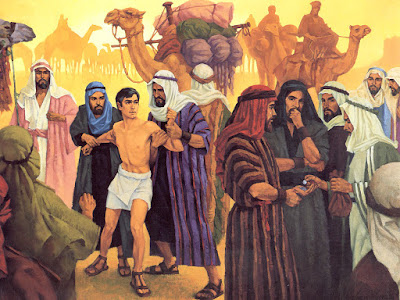 While Reuben was away, Judah and Joseph's other older brothers sat around and ate lunch, ignoring Joseph's plaintive cries from the pit. What a horrible situation! What horrible big brothers! What a betrayal! Suddenly, Judah catches sight of a Midianite caravan in the distance. He got a dark idea.

"Why just kill him when we can't even profit from it? Let's sell him as a slave! He'll never be back, so he'll be completely out of our lives. And we'll make some money on him."

It was agreed. When Joseph saw the rope being lowered into the pit, hope must have sprung in his heart for a moment. But it would have been quickly dashed in pieces as his beautiful coat was stripped from him, his hands were bound, and Joseph's own brothers counted out the gold they'd earned by selling him - as a slave.

At seventeen, and through no fault of his own, Joseph's life was shattered. His bright future appears snatched away. A more terrifying or painful situation than this would be hard to imagine.

When Reuben returned, some time later, he tore his clothes in guilt and grief to find Joseph was gone. He thought they'd killed him. But when Reuben found out what had really been done, rather than tell his father the truth, or do anything to mount a rescue, Reuben joined in the terrible coverup. They killed a sheep, dipped Joseph's torn coat in its blood, and carried it to their father with a terrible story! 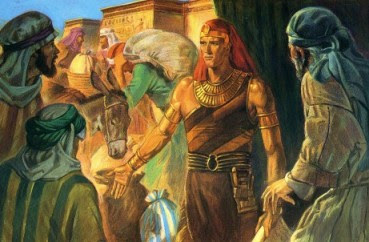 If ever there was a bunch of men who deserved retribution it was Joseph's heartless brothers! Now, the story fast-forwards to where we are reading today...  Joseph was second in command in all of Egypt. Having the friendship and trust of Pharaoh himself, Joseph could issue laws, make commands, and write his own ticket.  He could command for someone to be thrown into the dungeon - even killed. There were no limits to what he had the power to do to his brothers as payback for their cruelty.

They stood before him and didn't recognize him at all. Yes, Joseph had changed. He looked Egyptian. But there was more to it than that. The brothers were also blinded by their own expectations. The seventeen year old boy, whom they had sold into slavery was the very last person they expected to see as the Grand Vizier of all Egypt!

But Joseph recognized them immediately. As they stood before him, what must have gone through his mind? These men deserved retribution! Did Joseph consider revenge - even for a moment? No! The Bible story makes it plain that Joseph tested his brothers - not to harm them, but to see whether or not they had changed. And they had!

In fact Judah - the very one who wanted to sell Joseph for profit rather than kill him and get nothing out of it - was the one who stepped forward and offered to sacrifice himself in order to save Benjamin!

How differently that meeting would have gone if Joseph hadn't prepared for it in a godly way. Joseph could have wasted all those years in Egypt being bitter and plotting revenge. Had he done so, Egypt wouldn't have been prepared for a famine, Joseph wouldn't have had the character he needed to glorify God and be so greatly blessed, and the likelihood of meeting his father again would have been slim to none. Instead of thinking bitter thoughts, Joseph turned his attention to God.

He knew that Yahweh could have prevented the calamity from befalling him. Therefore, if God allowed it, there must be some good in it! Joseph's soul wasn't poisoned with bitterness. And so, Joseph didn't seek vengeance. This is similar to what we see in Christ, as He stood before His unjust tribunal.

Instead of becoming embittered against Pilate, our Saviour recognized that Pilate could do nothing to Him unless Yahweh allowed it. And, of course, Yahweh would only allow it if there were good in it:


Matthew 19:10-11  "Then saith Pilate unto Him, Speakest Thou not unto me? Knowest Thou not that I have power to crucify Thee, and have power to release Thee? Jesus (Yahshua) answered, Thou couldest have no power at all against Me, except it were given thee from Above..."

And what about you? Have you been wronged? Have you ever had anyone do something to you which was both cruel and wicked?

I can honestly say that I have - yet never has it come anywhere close to the level of wrong which was done to Joseph - nor to my dear Saviour! Have I been tempted to become bitter? Yes! I've even fallen into that pit for a time. But, God doesn't want us to go there. In fact, He wants us to go the "second mile" for those who do evil against us.

Matthew 5:38-48 "You have heard the law that says the punishment must match the injury: ‘An eye for an eye, and a tooth for a tooth.’ But I say, do not resist an evil person! If someone slaps you on the right cheek, offer the other cheek also. If you are sued in court and your shirt is taken from you, give your coat, too. If a soldier demands that you carry his gear for a mile, carry it two miles. Give to those who ask, and don’t turn away from those who want to borrow. “You have heard the law that says, ‘Love your neighbor’ and hate your enemy. But I say, love your enemies! Pray for those who persecute you! In that way, you will be acting as true children of your Father in heaven. For he gives his sunlight to both the evil and the good, and he sends rain on the just and the unjust alike.  If you love only those who love you, what reward is there for that? Even corrupt tax collectors do that much. If you are kind only to your friends, how are you different from anyone else? Even pagans do that. But you are to be perfect, even as your Father in Heaven is perfect."

He was able to direct them to God's higher purpose in allowing his slavery. And as he did this, Joseph's brothers were delivered from a burden of guilt which they had been carrying for about two decades! What a wonderful God we serve! His Ways are so much higher than ours - but in His Way is Life, Healing, Good, and Salvation.