Did you know that Job 40 contains a powerful evidence against the Theory of Evolution? Job 40 shows that dinosaurs lived with man! Consider the following evidence:

From the description found in Job, scientists have attempted to identify these animals. They believe "Behemoth" is a Hippo and "Leviathan" is a Crocodile. But these scientists limited their choices to non-extinct species and did not consider the possibility of dinosaurs because man and dinosaur never coexisted. Oh really? Even in my own personal Bible a footnote suggests these two animals were a hippo and a crock! But there are some obvious reasons why this conclusion is wrong. 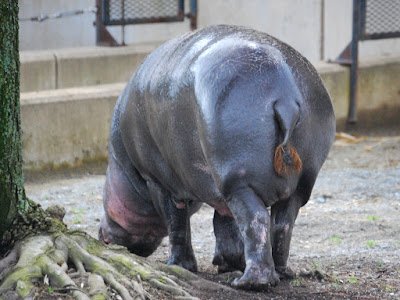 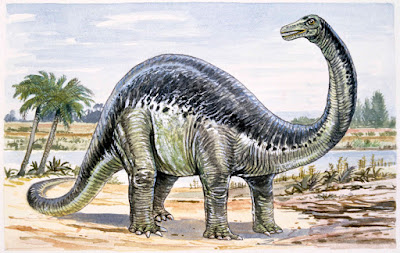 First, "Behemoth" cannot be a Hippo because of Job 40:17 "He bends his tail like a cedar". A hippo has a short tail like a pig. Behemoth, had a large tail shaped like a cedar tree (large and tapered). I believe a better choice is that Behemoth is a (Brontosaurus) type of large land dwelling dinosaur. It fits the description perfectly.

What is significant about this is that if "Behemoth" and "Leviathan" are dinosaurs, then is it crystal clear that Job had either seen them personally, or there was a recent memory of them. This of course flies in the face of current evolutionary theory. 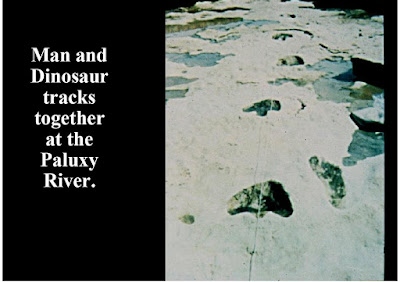 The Paluxy River in Texas is the home of Dinosaur National Park with hundreds of fossil dinosaur tracks. Right beside the dinosaur tracks are three sets of human fossil footprints and a large cat track. The most famous track is the Taylor Trail which consists of a series of 14 footprints in a left-right pattern. The stride and foot length is consistent throughout. 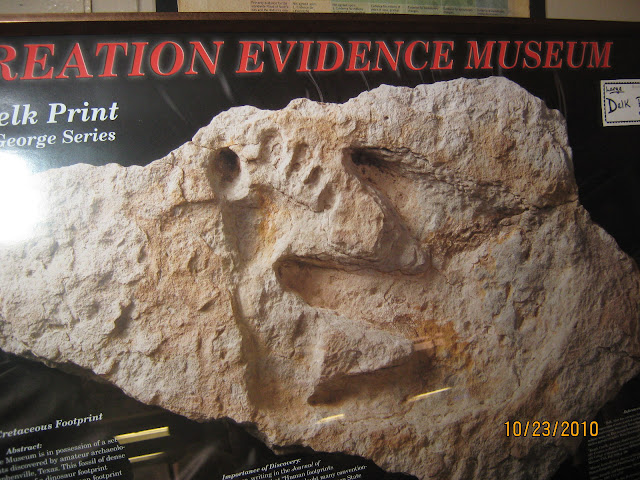 But what about Job 41's dinosaur description? While the Behemoth description makes sense, the Leviathan of Job 41 is more difficult. It looks like a dinosaur, until one reads the verse which says it breathed fire. At that point, we're in a bit of trouble. Right? Dinosaurs didn't breathe fire. Or did they? Consider the following from Creation Worldview Ministries:

God states in Job 41:15, 18-21:
“His strong scales are his pride, shut up as with a tight seal. . . . His sneezes [breathings] flash forth light, and his eyes are like the eyelids of the morning. Out of his mouth go burning torches; sparks of fire leap forth. Out of his nostrils smoke goes forth, as from a boiling pot and burning rushes. His breath kindles coals, and a flame goes forth from his mouth.”

If you read all of Job 41 with some discernment and knowledge of fossil remains, you will come to the realization that the creature called Leviathan in Scripture is a species of Plesiosaur(idae) or Pliosaur(idae) . 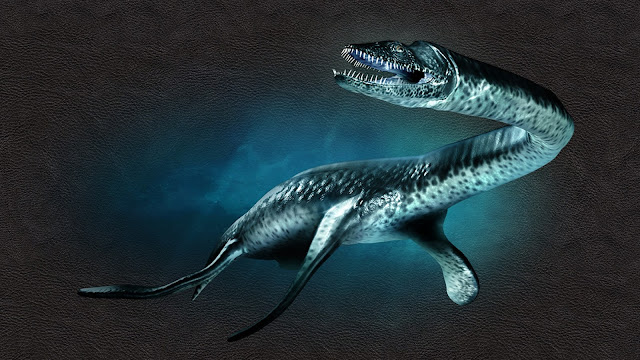 These were large aquatic reptiles. These creatures grew to lengths of 43 to 56 feet long. The Plesiosaurs had particularly long necks.

There are also land dwelling dinosaurs commonly referred to as “Duckbilled Dinosaurs.” These are in the family Hadrosaur(idae), subfamily Lambeosaurinae. One specie of Lambeosaur is particularly interesting to this discussion.

The Parasaurolophus , the “Crested Lizard,” had a single bony crest rising from its nostrils and going back over its head, looking something like a very large curved horn. The males had a larger crest than the females. Inside the crests were very large nasal cavities, much larger than needed for smell.

First, it is important to remember that bones tell you nothing about the existence of hair, what the skin color looked like, group social habits or internal secretions. Second, God originally made animals and mankind to be vegetarians.

What happens when you put a lot of vegetable material in a confined space with no oxygen? The decomposition of the material produces methane gas. Cows produce a lot of methane gas. As a matter of fact, environmental terrorists are quick to point this out and to try to use this information to get people to stop consuming milk, cheese and meat.

Environmental terrorists consider methane gas to be an air pollutant and a partial cause of dreaded global warming. [The idea of global warming is a myth. We have a serious problem with a thing dubbed “global warming,” but that is covered in a separate article.]
In essence, cows burp methane gas. Any child raised on a farm with cows knows about this. If you light a match and stick it in front of a cow when it burps, you will get a mini-flame thrower.

I wouldn't recommend it because it will scare the poor cow half to death and you might get trampled along the way.

Dinosaurs had a lot of vegetable materials in their stomachs and it would have produced a lot of methane gas. Sea dwelling reptiles could have easily had it too, especially if they ate kelp and similar aquatic plants. So, here we would have a source of fuel for a fire breathing dragon.

How could an animal intentionally ignite methane gas that it breathed out of its mouth or nostrils to produce a usable flame?

Of course, there might have been a mechanical mechanism , such as snapping or clicking the teeth together quickly to produce a spark similar to a flintlock rifle. Or, perhaps there was an electrical mechanism . A series of electrical organs lining the throat similar to those of electric eels or electric fish could have been used to ignite the gas. Electric eels produce voltages up to 600 volts on demand. More likely, however, there was a chemical mechanism involved. After all, it is the chemical mechanism of bioluminescence that makes fireflies light up the night sky.

Most animals (and people for that matter) have some arsenic and phosphorous in their body systems. Under the same conditions that produce methane gas from vegetable materials in the stomach of a cow, arsenic forms arsene gas (AsH 3 ) and phosphorous forms diphosphane gas (P 2 H 4 ). When arsene gas or diphosphane gas comes into contact with oxygen they will spontaneously ignite. This combustive action is what causes marsh gas (which is really just methane gas formed from the decay of vegetable materials in a swampy environment) to ignite.

Aquatic reptiles and land dwelling dinosaurs could have produced a flame from their mouths or nostrils using such a chemical ignition system. The purpose of such a system would most likely have been defensive in nature; although we cannot rule out other uses, such as mating or communication. With a little practice, proper muscle control and either electrical or chemical secreting organs lining the inside of its bony crest a Parasaurolophus might have been able to exercise just such a flame thrower on demand.

This is not that much different from the designed chemical process used by bombardier beetles that produce hydrogen peroxide and hydroquinone inside their bodies and combine them together on demand to produce a boiling hot toxic gas. The gas is directed out of twin gun ports with great accuracy. Bursts up to 500 times per second have been witnessed. This process produces a highly effective deterrent to attacks by predators.

The word “dinosaur” was coined in 1841 by the British comparative anatomist Sir Richard Owen. Before 1841, the most common word for dinosaur was “dragon.”

There are various references to dinosaurs in the Bible. Leviathans are mentioned five times in Scripture; twice in Job, twice in Psalms and once in Isaiah. Isaiah lived about 700 BC. Behemoth in Job 40:15+ is clearly a land dwelling dinosaur. An animal called a dragon is mentioned in the Book of Psalms. “Flying reptiles” or “flying serpents” are mentioned twice in Isaiah.

After the close of the Old Testament , flying reptiles were mentioned by Aristotle, Josephus and Herodotus. The first century naturalist, Pliny, wrote about animals bigger than elephants living in India . When the Spaniards arrived in South America in the 1500's they found that the Inca Indians had carvings of what we clearly know today as dinosaurs, but these carvings were done at least 300 years before modern paleontologists described them from the fossil evidence. Accounts of dragons and flying reptiles are found in the literature of Persia , Scandinavia and England from the third to the 16th century A. D. The most famous of these references being St. George and the Dragon. 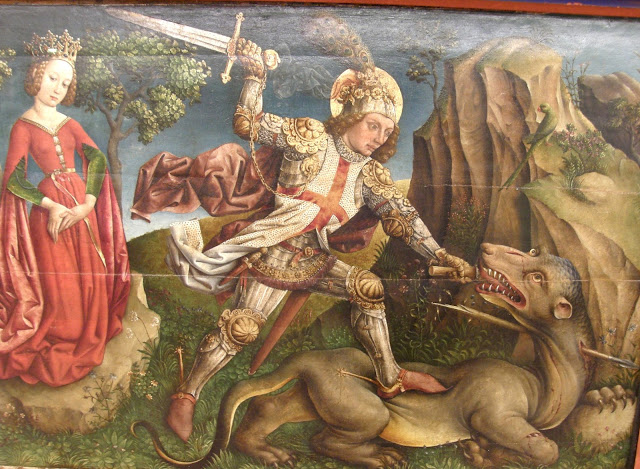 The story of St. George clearly depicts a Christian man rescuing a king's daughter from being sacrificed to a dragon in the late third century A. D. He gave the glory to Jesus Christ for his victory over the beast. His action and testimony convinced the local people to become Christians and to be baptized. He became the patron saint of England in 1350.

What better way to impress a woman of your courage and strength than to slay a fierce dragon on her behalf? Could it be that the extinction of the dinosaurs was nothing more than the competition between men trying to find a dragon to slay in order to get engaged? That is a fearsome driving force. Perhaps dinosaurs became endangered species from over hunting by men.

Were fire breathing dinosaurs created by God during the creation week? Did man and this kind of dinosaur exist at the same time? Could the stories of men fighting fire breathing dragons to rescue fair maidens be true?

Yes, on all counts. ("The Existence of Fire Breathing Dragons")

I think it's sad that mankind spends so much time trying to disprove the historical accuracy of the Bible. Actually, time and again archaeology and science prove the historical accuracy of Scripture. And its really fun to read the Bible's historical description of these two dinosaurs, explained from an eye-witness perspective. Its a rare and in-depth look at these amazing and extinct creatures, found in the Word of God.
at May 10, 2017 No comments: