One of the most misunderstood parts of the Bible is Colossians 2:14. This passage is used to undermine and "do-away" with the Law of God:

Colossians 2:14 "Blotting out the handwriting of Ordinances that was against us, which was contrary to us, and took it out of the way, nailing it to His Cross."

But God's Law was never "against us", as is the handwriting of Ordinances, mentioned in Colossians 2:14.  In fact, the Bible tells us repeatedly, that the Law of God was given to bless mankind:


Psalm 1:1-3  "Blessed is the man that walketh not in the counsel of the ungodly, nor standeth in the way of sinners, nor sitteth in the seat of the scornful. But his delight is in the Law of Yahweh; and in His Law doth he meditate day and night. And he shall be like a tree planted by the rivers of water, that bringeth forth his fruit in his season; his leaf also shall not wither; and whatsoever he doeth shall prosper."

In today's reading from Jeremiah, we find a powerful key to correctly interpreting Colossians 2:14. It tells us of another handwriting, which has to do with God's Law. This handwriting isn't the Law itself, rather its the written record of sin. By Bible definition, sin is the transgression (breaking) of God's Law (1 John 3:4). Jeremiah's description of this handwritten record which is certainly "against us" is found in Jeremiah 17:


Jeremiah 17:1  "The sin of Judah is written with a pen of iron, and with the point of a diamond: it is graven upon the table of their heart, and upon the horns of your altars."

What handwriting is there relating to the Law? There are only two options:


– The writings of Moses (Torah)


But, Christ Himself said He had not come to do away with the Law of Moses, in fact, He stated that the tiniest part of the Law would not be done away with until Heaven and earth pass away - Matthew5:17-18


– The written record of our breaking of the Law

Just as Jeremiah explains, our sins (Law breaking) are written. Unless this record is wiped clean, by having been covered in the Blood of Christ (nailed to the Cross) this record is certainly against us. This is why many Bible versions translate Colossians 2:14 to plainly show that it is the record of our sins - not the Law itself - which Messiah nailed to His Cross: 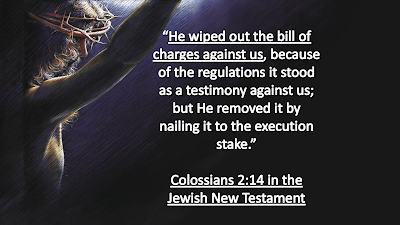 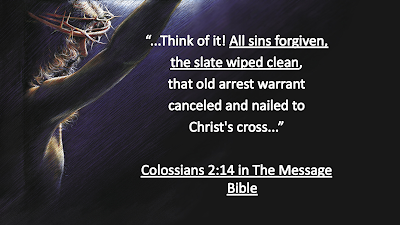 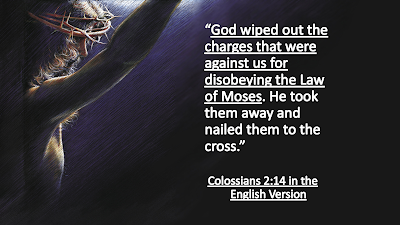 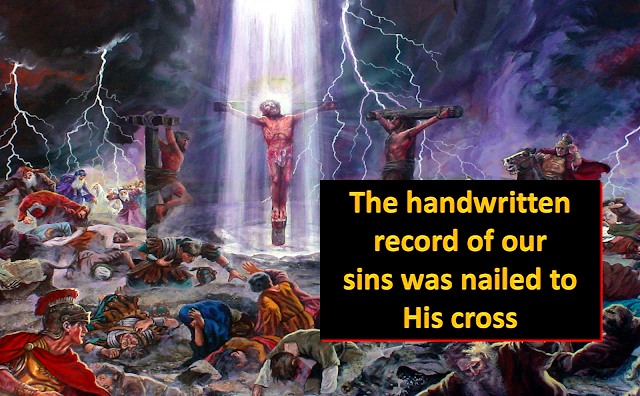 What a wonderful Saviour we have! It was through His Death, that my sins are forgiven and cleansed! And it is because of His Death and Life that I am not only forgiven, but empowered to live according to the Will of God - which includes obedience to God's Law.

On another note, we have returned from our 45-day ministry trip to Australia and New Zealand. Thanks so much for all yours prayers! Thanks also to Claire for all she has done to maintain this devotional blog in my absence!!

It was a wonderful trip, filled with miracles and Heavenly blessings!  My husband and I will be sharing some of these miracles and stories on Livestream this coming Sabbath and we cordially invite you to join us for the God-glorifying update which will broadcast live at 2 PM pst on November 11. To join us, watch our "SPECIAL REPORT: Lighted Way Mission in Australia and New Zealand", which will air on https://livestream.com/lightedway