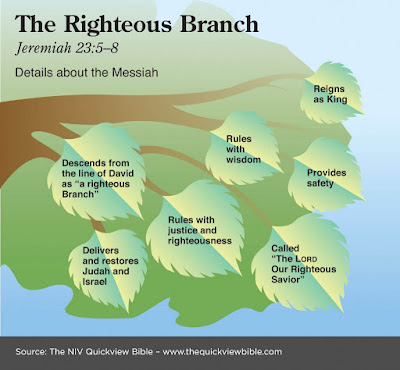 Today we start in the book of Mark. As I shared in this blog on February 19, each Gospel writer was working to portray a different Role of Messiah. There are five, prophesied Roles of Messiah. We can find the five Roles of Messiah by looking for the word "Branch" (always capitalized, because the Bible translators realized it was a title for Christ) which was translated from the Hebrew word Tsemach.

Isaiah 11:1    And there shall come forth a Rod out of the stem of Jesse, and a Branch (Tsemach) shall grow out of his roots."

The five Roles of Messiah are found in the Branch (Tsemach) Prophecies. Each Gospel writer (Matthew, Mark, Luke, and John) wrote with the intention of showing how Messiah fulfilled one of the Branch prophesies. This was to show that Yahshua was indeed the true Messiah. 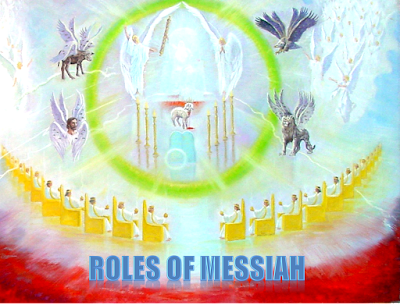 These roles of Messiah, or Branch prophecies are portrayed in the living creatures - known as seraphim - which surround the Throne of God.

In Revelation, we read about Yahshua who is called the worthy Lamb that was slain. This is the central Branch prophecy and role. The living creatures resemble a man, eagle, bull, and lion, which depict Messiah's Branch roles as follows:

These are the Tsemachs, and the Gospel writers who portray them: 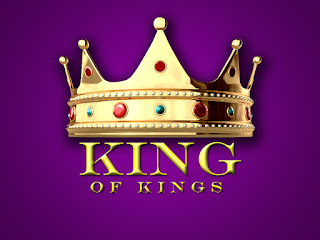 
Jeremiah 23:5-6  "Behold, the days come, saith Yahweh, that I will raise unto David a righteous Branch, and a King shall reign and prosper, and shall execute judgment and justice in the earth.  In His days Judah shall be saved, and Israel shall dwell safely: and this is His Name whereby He shall be called, THE LORD OUR RIGHTEOUSNESS."

The Gospel of Matthew was written to portray Messiah's Role as King. This is why we see, threaded throughout this book, references to His Kingship and Kingdom. After all, Messiah's Kingship is proven by establishing that He has a Kingdom. Consider the following examples of Matthew's focus upon this first tsemach Role:

•Matthew 5:19 – we find the least and greatest compared in the Kingdom of heaven.


•Matthew 9:35 – Yahshua went about teaching the “gospel of the Kingdom” 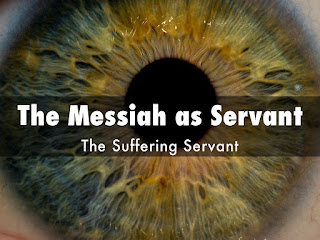 
Zechariah 3:8  "Hear now, O Joshua the high priest, thou, and thy fellows that sit before thee: for they are men wondered at: for, behold, I will bring forth My servant the BRANCH."

Throughout the book of Mark, there are numerous references to Messiah as the obedient Servant. He lays down an example of faithful Servanthood for every believer to follow. Here are a few examples of Mark's portrayal of this Tsemach Role.


Mark 9:35   "And He sat down, and called the twelve, and saith unto them, If any man desire to be first, the same shall be last of all, and servant of all."

Mark 10:44-45  "And whosoever of you will be the chiefest, shall be servant of all. For even the Son of man came not to be ministered unto, but to minister, and to give his life a ransom for many." 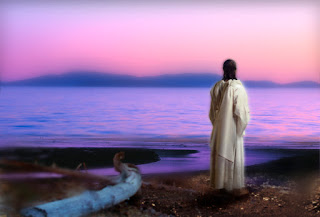 
Zechariah 6:12  "And speak unto him, saying, Thus speaketh Yahweh of hosts, saying, Behold the Man whose Name is The BRANCH; and He shall grow up out of His place, and He shall build the Temple of Yahweh."

Throughout the book of Luke, there are numerous references to Messiah as the Son of man. In this Gospel, Luke shows Messiah as the perfect Man - the second Adam. He is able to redeem us and to be our example in all things because He is one of us. Here are a few examples of Luke's portrayal of this Tsemach Role.

Luke 7:34 - "The Son of man is come eating and drinking and ye say, Behold a gluttonous man and a winebibber, a friend of publicans and sinners!"

Luke 9:44 - "Let these sayings sink down into your ears: for the Son of man shall be delivered into the hands of men."

Luke 21:36 - "... Pray always, that ye may be accounted worthy to escape all these things that shall come to pass, and to stand before the Son of man." 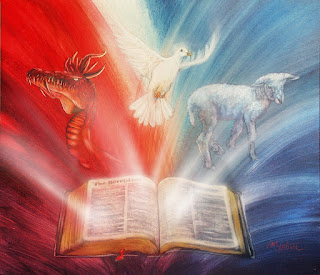 
Jeremiah 33:15  "In those days, and at that time, will I cause the Branch of righteousness to grow up unto David; and He shall execute Judgment and righteousness in the land."

The Gospel of John focuses upon Yahshua's Role as the worthy Lamb that was slain. John, the beloved disciple, records that John the Baptist announced Him as, "Behold the Lamb of God which taketh away the sin of the world."

But the Gospel of John isn't John's only book. John also wrote Revelation. Throughout the book of Revelation, there are numerous references to Messiah as God our Judge. This is the final Role of the Tsemach (Branch). Here are a few examples of John's portrayal of this Tsemach Role.


Revelation 6:10  "And they cried with a loud voice, saying, How long, O Yah, holy and true, dost thou not judge and avenge our blood on them that dwell on the earth?"

Revelation 19:11    "And I saw Heaven opened, and behold a white horse; and He that sat upon him was called Faithful and True, and in righteousness He doth judge and make war."

The heavens are divided into four quadrants which are themed around the Messiah's BRANCH (Tsemach) roles.

The first quadrant is the Man quadrant. The constellations in this part of the heavens are themed around Christ as the second Adam, and as our Example in all things.

The second quadrant is the Eagle quadrant. The constellations in this part of the heavens are themed sharound Christ as God. Here we find God's Work for the redemption of souls, the outpouring of the Spirit, and the Water of Life being outpoured on a dry and desolate land.

Last we have the Lion quadrant. The constellations in this part of the heavens show the Supreme Kingship of Messiah, ruling the earth and ridding it of sin, suffering and death. 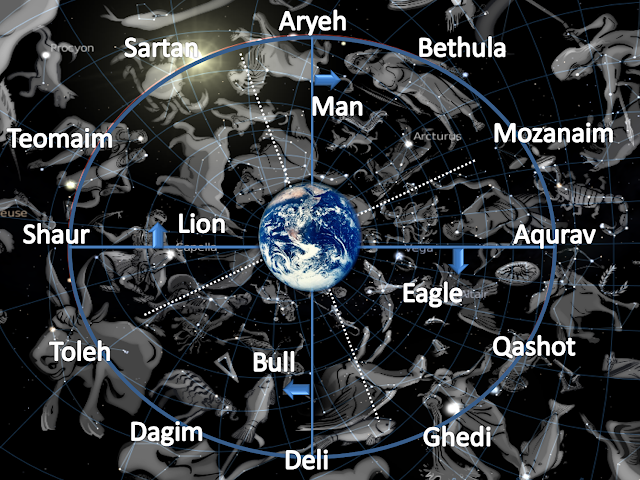 So, as we start reading the book of Mark, I believe it will be a blessing if we can be alert to notice his special focus on the Messiah. What was Mark's Tsemach focus? It was the Servanthood of Yahshua. Watch for this thread throughout this Gospel, in order to gain insights into how to be a faithful servant in the Father's Service.
at June 13, 2017 No comments: