Our Saviour sometimes used well-known news events as illustrations for His spiritual lessons. This is certainly the case in Luke 13:1 and in Luke 13:4.

Luke 13:1-9 bears a solemn warning, with two layers of application. The nation of Israel is pictured in the parable of the barren fig tree. But it also applies to every professing Christian. To demonstrate this, let's begin with getting some historical context on Christ's illustrations.

Christ had been in the middle of speaking to the people, warning of the threatening signs of the times, and urging men to repent and to turn and make their peace with God while there was yet time. Some of those listening in the crowd, probably Jerusalem Jews, responded by mentioning to Him a recent tragedy which had taken place in the temple courts.

The Bible says that there were present at that season some that told Him of the Galileans, whose blood Pilate had mingled with their sacrifices. For clarification, this doesn't mean that Pilate offered their blood amidst the blood of the temple sacrifices. He actually killed these Galileans while they were offering sacrifices. The murder was conducted in such a bloody way, that the victims' blood became mingled with the blood of the animals they had been sacrificing.

Why did Christ's listeners bring up this terrible event? They couldn't quite receive Christ's Message or warning - in a personal way. They believed terrible things only happened to terrible people. And the signs of the times which Jesus (Yahshua) warned about weren't going to effect people like them. They felt comfortable in the belief that those kinds of tragedies were Judgments of the Almighty against people who deserved it.

"Yes, Master," these people seemed to say, "we see there is a fierce hatred which is ever growing more intense between Jew and Roman. You know, for instance, what has just taken place in the city, only the victims in this case were Galileans, not righteous Jews. Is it not possible that these bloody deeds are simply punishments of men who are great sinners, as these doubtless were?"

Sadly, such terrible incidents were common under the Roman rule. Jewish historian, Flavius Josephus, recorded several events which shed some light on the back-story behind the Saviour's words.

In the writings of Josephus we learn about a tragedy which had taken place during a well-attended Passover gathering. Josephus records that at one Passover three thousand Jews were butchered, and the temple courts were filled with dead corpses; at another of these feasts two thousand were killed (see ' Ant.,' 17:9. 3; 20:5.3; and ' Bell. Jud.,' 2:5; 5:1). On another occasion disguised legionaries were sent by Pilate the governor with daggers among the Passover crowds (see 'Ant.,' 18:31). These wild and terrible tragedies were frequent occurrence in those sad days.

Now, with that backstory in our understanding, we can return to the moment recorded in Luke 13. Christ was speaking to the people about the need to repent and be right with God, while there was still time to do so. But having believed that they were more righteous than the victims in these terrible news stories, some in the crowd around Christ that day were under a false sense of security. They were complacent with the thought that those things happened to THEM because they were terrible people who must have deserved it. "But I am a good person. These things won't happen to someone like ME."

But tragedy may strike anyone at anytime.  As Christ made plain, it wasn't because these victims were more sinful than other people that their lives were taken so quickly. In verse 4, we find the reminder that all earthly things which we put our trust in to keep us safe cannot be trusted to protect us. Towers, that are built for safety, often prove to be the cause of men's destruction.

And what does all this mean to us today? What is Messiah's Message for us now? We humans tend to trust in the wrong things. We trust our retirement funds to protect us from financial disaster. Like the people around Christ that day, we may trust that if we live a "good" life, things will always go good for us. But there is no source of security in being in the right club, doing the right things, or earthly thing. Security is only found in God.

If we love God and belong to Him fully, then and only then are we secure. This doesn't mean that tragedy won't strike us. But it does mean that God won't allow "bad" things to come to us without some good purpose. Knowing this helps God's people to fully trust in His GOODNESS, no matter what happens.

Romans 8:28  "And we know that all things work together for good to them that love God, to them who are the called according to His Purpose." 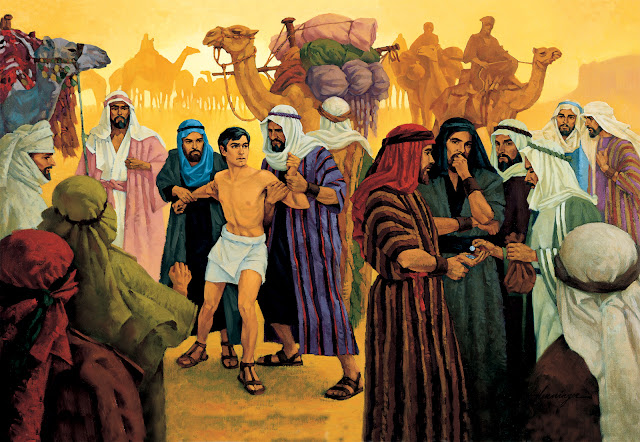 This is what Joseph did, when he was sold into slavery by his jealous brothers and taken - at the age
of 17 - from his comfortable home and loving parents. It must have been a dark day for that poor teen as the slave-traders camels carried him closer and closer to Egypt and farther and farther from home. Even his own brothers, who he had trusted, had proven untrustworthy. But God was still overshadowing Joseph under His protective Wings. God had not forgotten Joseph, even on his darkest day.

Joseph was sold as a slave to an Egyptian officer of Pharaoh named Potiphar. Because of Joseph's faithfulness to God, he went above and beyond the call of duty for Potiphar and was quickly put in charge of all the man's estate. There were many twists and turns, betrayals and trials in Joseph's story. But Joseph ended up as second in command, not of Potiphar's house, but of all Egypt. And it was because of Joseph's connection to God, that God was able to use him to deliver Egypt - and the surrounding region -from a terrible, 7-year famine.

The story came full-circle when one day Joseph's older brothers journeyed to Egypt to buy food, as their part of the country was also in famine. They stood before the brother they had sold, who was now the second most powerful leader of Egypt (second only to Pharaoh himself) and they didn't even recognize him. But, when Joseph finally revealed who he was to them, they were understandably terrified! They had done a horrible thing to Joseph in selling him as a slave! And they well knew it! Now, Joseph was standing before them with the power to destroy them.

But instead of seeking revenge, Joseph comforted his brothers by reminding them of his great trust in God. He told them that he knew that they had sold him into slavery for an "evil" purpose, but that God had allowed it to happen because He had a good purpose for it. In fact, it was because God had allowed Joseph to be taken into Egypt that there was food stored up for the time of famine! Here's what Joseph told his brothers that day:

So what about you? Do you belong to God? Do you abide in Him? Is He your Source of Security? Do you trust in Him? If so, than you are safe - no matter what future "evil" may come into your life. In God, you have true security. This doesn't mean that you won't have dark and even tragic days ahead. But it does mean that God will filter what comes to you. He will only allow whatever circumstances He sees are ultimately for good.

But, if we do not belong to God, putting our trust in some other earthly "safeguard", we will be destroyed. The ax is laid to the root of the fig tree. If we fully belong to God, we will bear His character Fruit in our lives. We will live with the assurance that our only job is to glorify God - it is His job to protect us. He is our Tower of Protection and only source of true safety - not an earthly tower made of stone which failed to protect the Galileans.

Proverbs 18:10  "The Name of the LORD (Yahweh) is a strong Tower: the righteous runneth into it, and is safe."