The next Scripture Doodle I will share from my Bible is Proverbs 27:21. It says, "As the fining pot for silver and the furnace for gold, so is a man to his praise."

It's an interesting concept - praise - and what it does in the human heart. A fining pot is where silver is melted down, as is the furnace for gold.

My father spent some time working as an inorganic chemist. During this time, he was often asked to test specimens of gold to 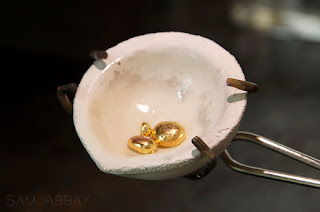 determine the level of purity. To do this, he placed the small samples of gold in a bone ash crucible (as shown in the picture on the right. Then he placed the crucible in a special furnace to melt it completely.

When the chemist removes the crucible from the oven, the gold will be in a completely liquid state. Now, the truth about the gold will be made known. If the gold is 100% pure, it will do something amazing. The gold blicks. A blick is when the gold "turns on" literally lighting up like a light-bulb being switched on. It is an incredible sight. But, if the gold is not completely pure, it will not blick. It takes the intense fires of the furnace to reveal the truth about the gold. This is why Scripture uses this as an analogy for praise. Praise is the furnace which reveals what we're really made of.

One older evangelist, whom I'll call Elder Roy, was an excellent example of this concept. Over the years he had traveled to more than 30 countries. He had prayed with countless people. He had preached innumerable sermons. And he had helped many who were in demonic bondage find freedom through spiritual warfare prayers. His had been a busy life of ministry. And truly many, many people had been blessed by God's Work through Elder Roy's life, prayers and messages.

But the sad part was that in the later part of his life, Elder Roy had begun to lose sight of Who should get the credit for "his" many accomplishments. It was evident that he was losing sight of Who was really doing all the work through him, because when people praised him - which they did very frequently - he began to take the praise as a personal compliment, rather than deflecting the praise Heavenwards, as he formerly had done.

In his earlier years, Elder Roy would always deflect the praise by saying, "I praise God that you were blessed by that sermon!" or "It is God Who has made you whole."  But, in his later years, this habit of deflection had changed. When people said things like, "Elder Roy, you have transformed my life! I am so grateful to you for all that you have done for me," Elder Roy would say, "Of course!" or "You may make the check out to..." In other words, Elder Roy no longer received praise with humble deflection. He had become a very prideful man, who was wrongly taking credit for the wonderful works God had done. As a result, Elder Roy gradually lost his ministry. It was a sad ending for a man who had been such a mighty warrior in God's army.

If only Elder Roy had been aware of his changing response to people's praise. Had he noticed the shift, which was visible to others, he might have fallen to his knees and gotten back on track with God - rather than losing his ability to minister entirely. If only Elder Roy had recognized that praise reveals so much, he might have had time to do something about it before it was too late.

Praise is the melting pot which reveals the true essence of the heart. For Herod, when his subjects praised his speech by shouting, "It is the voice of a god and not a man!" the praise revealed his pride.The Scripture tells the story in Acts 12:21-23:


On the appointed day, Herod donned his royal robes, sat on his throne, and addressed the people. 22And they began to shout, “This is the voice of a god, not a man! 23Immediately, because Herod did not give glory to God, an angel of the Lord struck him down, and he was eaten by worms and died.…

So the next time you receive praise, think about it before you respond. What does your response to praise reveal about your own heart?  As a good spiritual warrior, you will find that praise is a very useful test. It is the furnace which will reveal whether self is on the throne of your heart, or whether you are fully submitted to God's Sovereignty. It's all revealed in the praise test!
at September 29, 2016 No comments: