In Acts 23, we find an interesting experience which 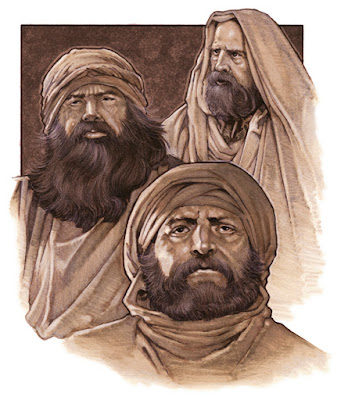 tremendous implications. Paul was speaking the truth before some Pharisees who were accusing him of doing and teaching evil. He told them truly that he had lived in good conscience before God. Immediately the high priest, whom Paul didn't know was the high priest at the time, commanded Paul to be slapped across the face! Paul-with his face still stinging from the unjust slap-verbally let the high priest have it, even calling down the Wrath of God upon him. Notice what happens next:


Acts 23:4-5  "And they that stood by said, Revilest thou God's high priest? (in other words, "do you dare to speak badly to the high priest?") Then said Paul, I wist not (did not know), brethren, that he was the high priest: for it is written, Thou shalt not speak evil of the ruler of thy people."

Wow! The high priest had done wrong to Paul, and he deserved Paul's rebuke. Yet, Paul apologized! What is going on here? The concept we find profoundly illustrated in this story is the concept of respect for authority. And, God would have his people respect the position of leadership, even when the leader's actions are not worthy of respect. This is what it means to remain in godly submission under authority, as God intends.


Submission under godly authority is a living demonstration of faith.  The connection between submission under the Heaven-appointed “chain of command” and living faith is revealed in the Bible story of the Centurion with the sick servant (Matthew 8:5-13).


Matthew 8:5-13   And when Yahshua was entered into Capernaum, there came unto him a centurion, beseeching him, and saying, Lord, my servant lieth at home sick of the palsy, grievously tormented.  And Yahshua saith unto him, I will come and heal him. The centurion answered and said, Lord, I am not worthy that thou shouldest come under my roof: but speak the word only, and my servant shall be healed.  For I am a man under authority, having soldiers under me: and I say to this man, Go, and he goeth; and to another, Come, and he cometh; and to my servant, Do this, and he doeth it.  When Yahshua heard it, he marveled, and said to them that followed, Verily I say unto you, I have not found so great faith, no, not in Israel.  And I say unto you, That many shall come from the east and west, and shall sit down with Abraham, and Isaac, and Jacob, in the kingdom of heaven.  But the children of the kingdom shall be cast out into outer darkness: there shall be weeping and gnashing of teeth.  And Yahshua said unto the centurion, Go thy way; and as thou hast believed, so be it done unto thee. And his servant was healed in the selfsame hour."

Submission under godly authority is a choice. The one who submits must choose to do so. The word “submission” is important to understand.  In 1 Peter 2:13, the Greek, the word “submit” is: ὑποτάσσω (hoop-ot-as'-so).  It is used in the middle voice, which indicates that the one doing the submitting participates both in the action (submission) and in the results of the action (obedience).

1 Peter 2:13  "Submit yourselves to every ordinance of man for Yahweh's Sake: whether it be to the king, as supreme; Or unto governors, as unto them that are sent by Him for the punishment of evildoers, and for the praise of them that do well.  For so is the Will of God, that with well doing ye may put to silence the ignorance of foolish men."


Submission also carries the military connotation of “lining up under.” This concept can be seen in our military today.  Our involvement in the military is voluntary, but once we choose to enlist, or “line up under” that authority, there are binding obligations upon us, and we must obey.


By choosing to line up under Heaven-ordained authority it shows that we understand several important, Biblical principles:

Here are a few of the many benefits:


From the human perspective, the leader is the one who is the “top of the food chain,” so-to-speak.  This is the person who gets to boss everyone else around.  But, this isn’t God’s view of authority.  A godly authority figure will be a gentle servant, like our Saviour, as it says in Mark 10:44 “And whosoever of you will be the chiefest (highest authority), shall be servant of all.”  In fact, of all people, persons in areas of leadership also have the highest responsibility before God.


There are three areas of authority, which Yahweh has established. They are the family, the church, and the civil authorities or government.

But many times we see the failings and weaknesses in the people who are in leadership over us, and we use their failings as an excuse to not be submitted under their leadership. This is not how God works. God expects us to respect an authority person’s ROLE or POSITION – even when we cannot appreciate their choices or actions.

Both Paul (in Acts 23 with his reaction to the high priest) and David, who took a part of king Saul's robe, but would not slay the king (whom he called "the Lord's anointed").

Rebellion against God-ordained authority effectively removes God’s Protection from our lives. By it, we are left exposed, an easy prey for satanic attack. In fact, the only other thing which so completely exposes us to the onslaught of spiritual darkness is involvement in witchcraft. Witchcraft is something so evil that we can quickly discern how its practice opens the floodgates of demonic bondage and spiritual darkness. But what most Christians don’t realize is that God equates rebellion with witchcraft, as Scripture states in 1 Samuel 15:23. Rebellion and witchcraft are equally destructive, bringing the same amount of demonic rights and curses into our lives and homes!

Rebellion is biblically defined as “insurrection” or revolt (in attitudes or actions) against our human authority figures (Ezra 4:19). The word “insurrection” from this verse includes “mutiny”, “defiance”, “resistance”, “stubbornness” and “insubordination”.  These are big and obvious issues. But rebellion doesn’t start out big and obvious. It usually creeps into our hearts quietly—unnoticed even. In fact, at least in its earliest stages, those who are in rebellion rarely realize it. This is because our rebellious attitudes and behaviors seem completely justified by the character flaws of our human authority figures. But, whether we mentally justify it or not, indulging any rebellion still smashes our spiritual safeguards. Yet, it is such a misunderstood concept that it is necessary to restore the Scriptural perspective.

Scripture describes Satan as a “roaring lion” going about looking for weaknesses and areas of vulnerability in us, so that he may destroy us (1 Peter 5:8). If he is to be successful in his attack, He must effectively remove us from being under the “Wings” of the Almighty.

Hide me under the shadow of Thy Wings, Psalm 17:8.

Trust under the shadow of Thy Wings, Psalm 36:7.


God is much too strong for Satan to drag us out from under His Protective Wings. But if he can tempt us to remove ourselves from God’s Protection—even inspiring us to feel “righteous” and “justified” in so doing—the enemy can steal our anointing and render us weak and vulnerable.

God’s Protection is a gift which He longs to give to each of His children. The Bible reveals the key to having His guidance and protection continually. The key is to keep ourselves—by choice—subject to our human authorities. Every person, no matter one’s age or gender, has God-ordained “higher powers” which are over him/her.

Let every man be subject unto the higher powers, For there is no power but of God; the powers that be are ordained of God,  Romans 13:1.


God intends for humans to hold positions of authority under His Headship. We all fit into this authority structure somewhere. This has been the case since Creation. In the Beginning, God created mankind in His image and told our first parents to have dominion over the earth. This was the first time God delegated authority to man.

So God created man in His own Image... male and female...  And God said unto them, Be fruitful, and multiply... and have dominion over every living thing that moveth upon the earth, Genesis 1:27–28.


The idea of being subject under another human authority is becoming an increasingly offensive idea, in our current society. We like being “islands”, accountable to no one and “empowered” to make our own decisions! “After all,” we tell ourselves, “It’s my life!” But is it really? This common belief is opposite of what the Scriptures tell us. When we come to God, one of the first things we need to accept is His Ownership of us. We are His children. He is our Heavenly Father, Creator, and King. His Will is to be done in the earth of our hearts and homes, as it is in Heaven. Being fully submitted to God’s Authority is the first key to having the power to resist and defeat the enemy of souls!

Submit yourselves therefore to God. Resist the devil, and he will flee from you, James 4:7.


But submitting ourselves to God doesn’t just place us directly under His Headship—with Him and Him alone over us. God also established a “chain of command” in human authority under Him which He expects His children to respect and submit under.  There are Heaven-ordained authority structures over every person. In fact, often, we are both in authority over someone, while also being under someone else’s authority.

Any positions of authority, which others hold in our lives, are allowed by God. Submission to the human authorities in our lives is submission to God. And we cannot abide under Heaven’s protective Wings (or umbrella) unless we remain under the authority structure which God established .

Let every soul be subject unto the higher powers. For there is no power but of God: the powers that be are ordained of God. Whosoever therefore resisteth the power, resisteth the ordinance of God: and they that resist shall receive to themselves damnation... Wherefore ye must needs be subject, not only for wrath, but also for conscience sake, Romans 13:1–5.


Lest we grow concerned here, being subject under a higher power doesn't involve disobeying the Will of God!  But even when we must tell our authority figures that we cannot comply, we are to do so in the right spirit, with respect for their position, even when we cannot respect their actions. This is what we see exemplified in Paul, David, Shadrach, Meshach, and Abednego... and many others.

This is the Pattern given in God's Word. And it is the path of faith and blessing.