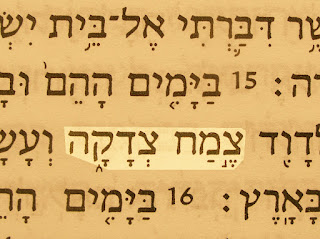 Having completed the book of Hebrews yesterday, today we are starting the New Testament portion of our reading with the book of Matthew. Each Gospel writer was working to portray a different Role of Messiah. There are five, prophesied Roles of Messiah. We can find the five Roles of Messiah by looking for the word "Branch" (always capitalized, because the Bible translators realized it was a Title for Christ) which was translated from the Hebrew word Tsemach (shown in Hebrew in the picture on the right).


Isaiah 11:1    And there shall come forth a Rod out of the stem of Jesse, and a Branch (Tsemach) shall grow out of his roots."

The five Roles of Messiah - found in the Branch (Tsemach) Prophecies. Each Gospel writer (Matthew, Mark, Luke, and John) wrote with the intention of showing how Messiah fulfilled one of the Branch prophesies. This was to show that Yahshua was indeed the true Messiah. 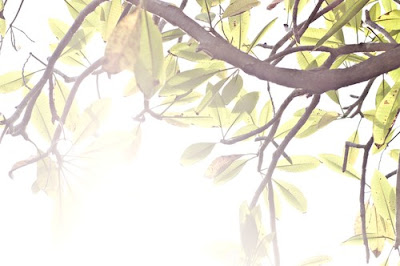 
Branch Prophecy: Messiah would be King

Jeremiah 23:5  "Behold, the days come, saith the LORD (Yahweh), that I will raise unto David a righteous Branch, and a King shall reign and prosper, and shall execute judgment and justice in the earth."

Gospel Writer focusing on Yahshua's Role as our King: MATTHEW

Examples of Matthew's focus on Christ's Kingly Role are revealed in his repeated reference to the Kingdom. A Kingdom must have a King - and a King has a Kingdom, as we see in: Matthew 5:19, Matthew 6:13, Matthew 9:35, and Matthew 12:25.


Branch Prophecy: Messiah would come as a Servant

Zechariah 3:8  "Hear now, O Joshua (Yahshua) the High Priest, Thou, and Thy fellows that sit before Thee: for they are men wondered at: for, behold, I will bring forth My Servant the BRANCH."

Gospel Writer focusing on Yahshua's Role as our Servant: MARK

Examples of Mark's focus on Christ's Servant Role are revealed in his repeated references Yahshua being a Servant and teaching His followers the importance of servant-hood: Mark 9:35, Mark 10:44-45.

Gospel Writer focusing on Yahshua's Role as a Man: LUKE

Examples of Luke's focus on Christ's Manhood are revealed in his repeated references Yahshua being the "Son of Man": Luke 7:34, Luke 9:44, Luke 21:36


Branch Prophecy: Messiah would be the Lamb Slain

Isaiah 4:2-4  "In that day shall the Branch of the LORD (Yahweh) be beautiful and glorious, and the fruit of the earth shall be excellent and comely for them that are escaped of Israel. And it shall come to pass, that he that is left in Zion, and he that remaineth in Jerusalem, shall be called holy, even every one that is written among the living in Jerusalem: When the Lord (Yahweh) shall have washed away the filth of the daughters of Zion, and shall have purged the blood of Jerusalem from the midst thereof by the Spirit of Judgment, and by the Spirit of Burning." 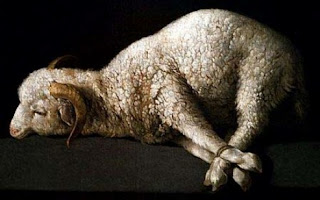 Gospel Writer focusing on Yahshua's Role as the Lamb of God / Saviour: JOHN

Examples of John's focus on Christ as our Saviour / Lamb-of-God-Which-taketh-away-the -sins-of-the-world are revealed in his repeated references Yahshua being the "Son of God" and the "Lamb of God": John 1:29, John 1:34, John 1:36


Branch Prophecy: Messiah would be the Judge

Jeremiah 33:15   "In those days, and at that time, will I cause the Branch of righteousness to grow up unto David; and He shall execute judgment and righteousness in the land.

Examples of John's (Revelation) focus on Christ the Judge are revealed in his repeated references Yahshua Judging, making War, and Avenging: Revelation 6:10, Revelation 19:11

The Genealogy of Christ
Matthew 1:1-17 gives Matthew genealogy of Messiah. Since his focus is to portray Christ's Kingship, Matthew carefully gives the lineage through David. But, before we get into this more deeply, let consider a few more details, to flesh out the record more fully:

Interpretation principals
To better understand the genealogy of Messiah, it is important to know some of the notions Jews had regarding ancestral records. This section discusses property rights, prophecies, and Jewish use of the word son.


Jews carefully maintained accurate genealogical records. They did so primarily because property rights in Israel were linked to family heritage.

When the Jews settled in Israel, the tribes were given portions of the land as an inheritance. Families within each tribe were given parcels of that land. The land could be farmed, developed, or sold. Every 50 years a dispossessed family could lay claim to the parcel of land which their ancestors had received when it was originally distributed.

Individuals who could not trace their family had no inheritance in the nation of Israel. They were treated as dispossessed foreigners. This factor alone contributed strongly to the Jewish preoccupation with genealogies.
Prophecies also contributed to Jewish interest in genealogies. God had promised several people that the Messiah would be one of their descendants. To prove this descent, it was important to maintain accurate genealogical records. The table below shows that Yahshua was the descendant of every foretold patriarch:


The Hebrew people did not use the word son in a limited sense, as we do today. Matthew 1:1 states Yahshua was the "son of David, the son of Abraham." This appears to indicate that David was the father of Yahshua, and Abraham was his grandfather. A Hebrew would have understood that Matthew did not mean there was only one generation between these men; but that Christ was a descendant of David, who was a descendant of Abraham. This fact is born out in the verses that follow (Matthew 1:2-17).

In the Hebrew mind, the word son could be applied to one who was not a literal, first generation son, as is commonly understood today. It could mean a descendant; which could be a grandson, great grandson, or son of a more distant generation.

Matthew wrote to the Jews to present Yahshua as King of the Jews. The account is in Matthew 1:1-17.

It begins by showing Yahshua was a legal heir to the throne of David, by virtue of His lineage. This fact is immediately set forth in verse one, which states Yahshua was the "son of David, the son of Abraham." His kinship to David the King of Israel is mentioned before that of Abraham, the father of Israel.


The Genealogy of Christ, recorded by Matthew, fits into the following three groupings:

The names in each division appear below.

Matthew recorded that there were 14 generations from Abraham to David, 14 from David to the Babylonian Captivity, and 14 from the release to Christ. David's name was repeated because he was alive when the first division ended, and when the second division began.


(charts and genealogy information are quoted from http://www.lifeofchrist.com/life/genealogy/print.html)

What is the significance of these three groupings of fourteen? It illustrates Christ's Messianic Work to bring His people out of spiritual Egypt (slavery to sin) to ultimate Canaan (the Promised Land). Christ is empowered to do this mighty Work through the seven roles of the Spirit, anointing Him:

Isaiah 11:1-2  "And there shall come forth a rod out of the stem of Jesse, and a Branch shall grow out of his roots: And the 1) Spirit of the LORD shall rest upon Him, 2) the Spirit of Wisdom and 3) Understanding, 4) the Spirit of Counsel and 5) Might, 6) the Spirit of Knowledge and of 7) the Fear of the LORD (Yahweh)."

But we'll leave the subject of the seven layers of anointing for another time. For now, let's conclude with this thought. Matthew's purpose in giving us the Genealogy of Christ in Matthew 1 was so that we would understand His Kingship - personally. As the Messiah, He is leading us from Egypt to Canaan. It is because of His Rule in our hearts, that we may be citizens of His Kingdom and fitted for a Better Land.
at February 19, 2018 No comments: