The concept which most jumped out at me from our Bible reading today was found in Luke 22:31-34:


"And the Lord (Master) said, Simon, Simon, behold, Satan hath desired to have you, that he may sift you as wheat. But I have prayed for thee, that thy faith fail not: and when thou art converted, strengthen thy brethren. And he said unto him, Lord (Master), I am ready to go with Thee, both into prison, and to death. And He said, I tell thee, Peter, the cock shall not crow this day, before that thou shalt thrice deny that thou knowest Me."

In this sobering conversation between Messiah and the apostle Peter, perhaps the most startling reality is that following Christ and going through all the motions doesn't mean that you're truly converted! Peter had been following Jesus (Yahshua) for quite some time, by the time of Luke 22. They are eating the final Passover meal together as the Saviour would be crucified the very next day.

And in that dinner conversation, Christ admonishes Peter, "when you are converted, strengthen the brethren." What? "When you are converted?" How could it be that Peter had been following the Saviour for all this time, yet he was still unconverted? What a sobering thought!

Peter didn't know his own true condition. He was so sure that he would live for - and even die for - Christ. Yet, in the moment of his greatest test, what he really did was deny and betray his Master... In fact, Peter's betrayal of Christ was every bit as bad as Judas'. The only difference between them was that Peter repented. The the character flaws - and lack of true conversion - that it would take to so bitterly betray his Master were in him - yet Peter couldn't see the truth about himself. Can we really be so blind!? It's a sobering and scary thought! And as we cogitate on that one a bit, let's retrace the steps of the events which finally led to Peter's true conversion... 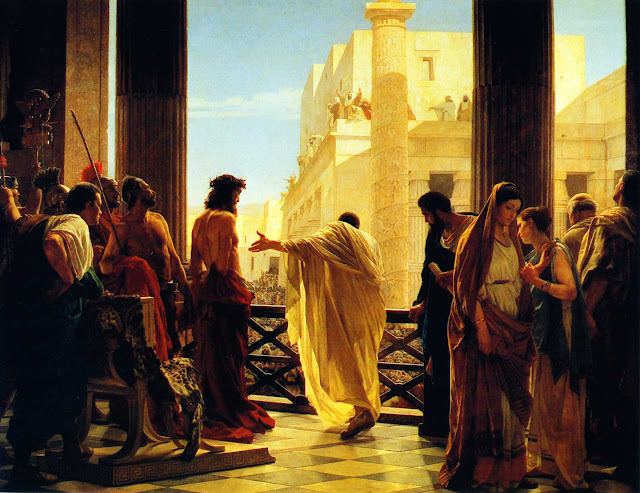 It was the darkest night ever to hit our planet, from that day to this. Yahshua was facing
Pilate’s tribunal, His Death mere hours away. The disciples had all forsaken Him, as He stood before the judgment seat beaten, betrayed, and alone. Gathered by a fire in the courtyard, several observers listened to the proceedings while warming themselves and quietly con-versing. Trying hard to blend in, Peter reached his own cold hands towards the flames. He strained to see and hear what was happening in the judgment hall, while carefully masking his interest.

Suddenly, his worst fears took form, as a young servant girl pointed at Peter, “I recognize you! You were with that Man!”

All eyes turned towards Peter. The red glow of the flames danced upon his face, further etching his momentarily startled expression. Fellowship with Yahshua would bring him censure, possibly even death!

“I don’t know Him. You’ve mistaken me for someone else.”

Onlookers may have wondered whether the flicker of fear upon his face had been imaginary, a phantom born of firelight.

Someone else casually commented, “You sure look like one of the guys that was hanging around with Him.”

Only the very observant could see that his palms glistened with icy sweat. But there seemed no trace of fear in Peter’s vehement reply, “I told you people, I never knew Him!”

The fireside gatherers made a grim company, eyes averted and suspicions aroused. It didn’t take long for the next accusation to come. It was from the servant girl again. Her gaze fixed upon Peter she blurted, “But I know you were with Him. In fact, you’re one of His disciples! You even talk like Him.”

Profanity bubbled forth from Peter’s panicked lips, as he punctuated each word with sailor-style expletives, “I said I never knew Him. Now leave me alone!”

Barely had his profane denial left his mouth, when a rooster crowed, announcing that dawn was streaking the sky. In an instant, Yahshua’s prophecy given just hours before, flashed into Peter’s guilty mind, “Before the cock crows, you will deny Me three times.” 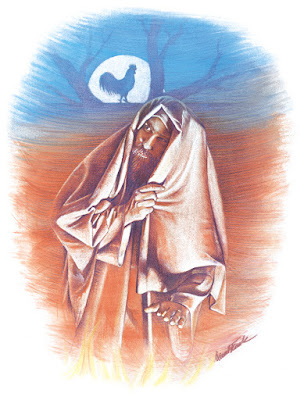 The tragic story of Peter denying Christ bears a warning to us all. In our final Revelation-in-the-Wilderness experience at the End of the World, when God’s people must face every spiritual warfare trial, followers of Christ will all face the temptation to save our skins by denying Yahshua. And how will we respond on that day? Will we deny the Saviour to save ourselves? The very idea fills us with horror! Of course not! But don't answer quite so quickly. We think we wouldn't do such a horrible thing, but so did Peter! How can we really be sure?

If we are blind to the truth, like Peter, we will argue vehemently that we would NEVER deny Yahshua, ignoring our obvious character flaws which would be plainly revealed by the Holy Spirit, if we were willing to look. In this passage of Luke 22, we are given a wake-up call and an opportunity to see our own sinful condition. It is possible for us to see the truth about ourselves, if only we'll take the time to ask God to reveal it. By seeing the true condition of our hearts before the day of testing, we may repent! By seeking true conversion before the fiery trial, we may glorify God in the fire, instead of remaining in the heart-condition which is capable of betraying Him.

From ancient times, the crow of a rooster signaled the end of the night and the dawning of the day. Its crow called the sleepers from their slumber, awakening them to the new morning. But for Peter, that pre-dawn rooster’s crow heralded a spiritual awakening, as well. It was just the wake-up call that he needed to open his eyes to his true condition, bringing him to remorse and full repentance.

We are all told that the followers of Christ will share in Yahshua’s sufferings. If we want to share in Christ’s power and glory, we must first partake of His suffering.

1 Peter 4:12-13 - "Beloved, think it not strange concerning the fiery trial which is to try you, as though some strange thing happened unto you: But rejoice, inasmuch as ye are partakers of Christ's sufferings; that, when His glory shall be revealed, ye may be glad also with exceeding joy." 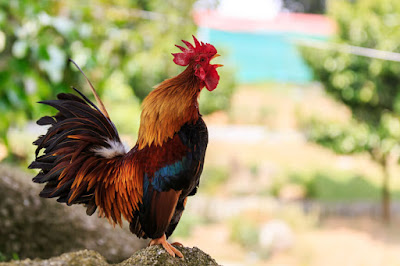 On the fateful night of the rooster’s crow, Peter experienced the call to share in the Saviour’s suffering. He may well have suffered, had Peter admitted that he was indeed a follower of Christ. And, as it turned out, because Peter wasn't truly converted, he was unwilling to risk suffering - even for Christ.

But as the rooster crowed, Peter spiritually awakened to his true heart-condition. He ran from the place, returning to Gethsemane, where he fell on his face before God, weeping bitterly. He confessed his sin and repented. And there in the early morning hours - Peter was finally and completely converted.

In that moment, he  was transformed from a self-preserving, idolatrous pretender into a genuine, deeply-committed, fully-converted servant of the living God. Peter’s test is one that every child of God faces, at one time or another. If we are to partake of the glories promised the people of God, we will also partake of His suffering.

Do you know what you'll do when you face Peter's test? May it be that we will not waste time now thinking we are faithful, when the seeds of betrayal still lie waiting in our unconverted hearts! Let it not be that we would be like Peter - going through all right motions, hanging out with the Saviour - yet still unconverted. Let us seriously pray and ask God to show us the true condition of our hearts now. Only then will we stand in the day when Satan comes to "sift us like wheat". Let us pray with David, as instructed also in Jeremiah:

Jeremiah 17:9-10(a) "The heart is deceitful above all things, and desperately wicked: who can know it? I the LORD (Yahweh) search the heart, I try the reins..."