Today we read the last chapter of the Book of Romans. As we do, I thought it might be of interest to delve into some of the backstory behind this book. To me, discovering the setting of a Scripture is fascinating. It brings the Bible alive in living color. I hope it does the same for you :-)

The following is taken from the Blue Letter Bible, Intros to the Bible, "The Epistle to the Romans".

The Epistle to the Romans was written to Christians residing in the city of Rome (Romans 1:7).

Rome (see above and below)  was the center of the Empire and was ethnically diverse. 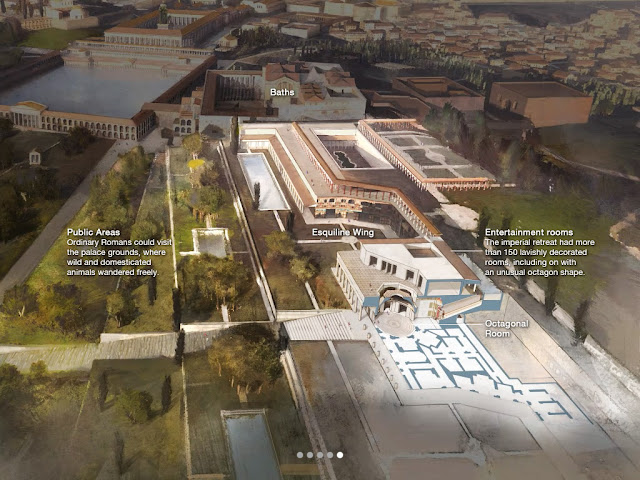 In the first century AD it had a population of around one million people  in an area less than ten square miles. Of this large population, it is estimated that there was between 40,000 and 50,000 Jews in the city. The Jewish population dates back to the second century BC as part of the Diaspora. 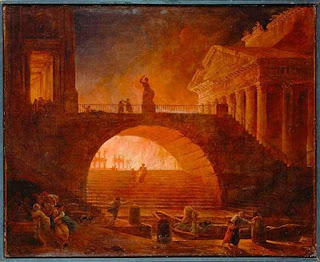 In AD 64 there was a large fire in Rome that led Nero to expulse the Jews.  This also resulted in the first major persecution of the Church.

It is unclear how the church in Rome originally began. The best explanation is that the Romans who were present at Pentecost (Acts 2:10-11) eventually made their way back to Rome and started a church in one of the synagogues.

However, there are also other explanations. "All roads lead to Rome" was the popular saying that demonstrated the city's importance and accessibility. It should not be surprising that there was already an established church before Paul's arrival. People who may have heard the gospel in Asia, Greece, or elsewhere could have traveled to Rome. 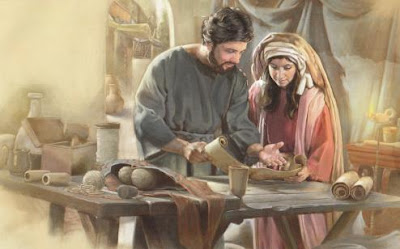 In Romans 16 Paul greets several people, with the most notable of these being Priscilla and Aquila. Both Aquila and Priscilla were in Rome until about AD 49 when Claudius expelled all the Jews from the city (Acts 18:2). Paul met the couple when he came to Corinth (ca. AD 51). They did further ministry in Ephesus (Acts 18:19) around ca. AD 53. From there they went to Rome. It is likely that they were not the first ones to bring the gospel to Rome. A church was probably already established as it is noted that Paul greets the church that met in the their house (16:5).

Of course the city of Rome was predominately populated by Gentiles and so it is expected that the church was comprised of both Jewish and Gentile believers (cf. 1:6, 7:1). Paul addresses both groups in this epistle.


Paul, the author of Romans and twelve other New Testament Epistles, was born as an Israelite in Tarsus of Cilicia (Acts 22:3; Phil 3:5). The name that he went by was Saul. He studied under Gamaliel in Jerusalem (Acts 22:3) and became a Pharisee (Phil 3:5). He was present at the stoning of Stephen (Acts 7:58; 8:1) and became a persecutor of the church (Acts 8:1-3; Phil 3:6). While seeking to have Christians bound, he was converted on the road to Damascus 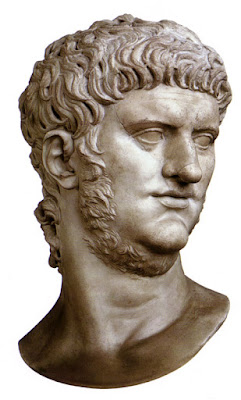 as Christ appeared to him (Acts 9:1-9). He went into Damascus (Acts 9:10-19) then went to Arabia for some time (Gal 1:17) before returning to Jerusalem (Acts 9:26-29; Gal 1:18). He met up with Barnabas and ministered with him in Antioch (Acts 11:25-26). Then he began to go on various missionary journeys to bring the Gospel to the Gentiles. He was imprisoned in Rome on two occasions and was martyred under Caesar Nero.

In 2 Cor 12:7 Paul refers to a "thorn in the flesh" which seems to be a reference to a physical ailment of some kind. The direct or indirect result of this ailment appears to have affected Paul's eyesight. Gal 4:15 states that the Galatian Christians would have given their own eyes to Paul if it were possible. Paul even experienced difficulty recognizing the high priest in Acts 23. As a result of these vision problems, Paul needed assistance in composing his letters, which necessitated the need for a scribe to help him. Paul had multiple scribes who wrote for him-the one he utilized for Romans was Tertius (16:22).

Date and Location of Composition 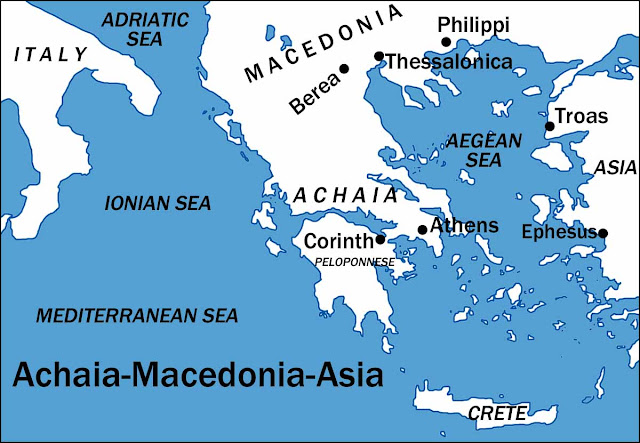 Paul wrote the letter to the Romans from the city of Corinth, while he was on his third missionary journey. At the time he was gathering an offering from the Gentile Christians for the church in Jerusalem (15:25; Acts 24:17). This would place the letter's composition date at ca. AD 56.

Paul mentions three people that help to identify the letter's composition with Corinth: Phoebe (16:1), Gaius (16:23), and Erastus (16:23). He sent Phoebe of Cenchrea to the church in 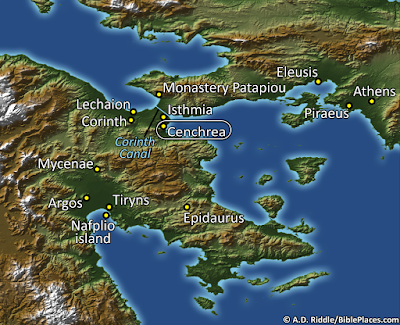 Rome as the bearer of the epistle. With her being from Cenchrea, she would have had ties to Corinth because Cenchrea is the port city for Corinth.

There was a Gaius referenced in 1 Cor 1:14 as one who lived in Corinth and many have identified him as the Titius Justus in Acts 18:7. Erastus was the city's treasurer (or director of public works) and in Corinth an inscription was discovered that refers to an Erastus as the city aedile (i.e., an official in charge of public works, etc.), which some have corresponded to Paul's reference to him.

The Book of Romans concludes with this beautiful blessing, which comes down to us who read it, even today:


Romans 16:24-27  "The grace of our (Master Yahshua) Christ be with you all. Amen.  Now to Him that is of power to stablish you according to my gospel, and the preaching of Yahshua Christ, according to the revelation of the mystery, which was kept secret since the world began, But now is made manifest, and by the scriptures of the prophets, according to the commandment of the everlasting God, made known to all nations for the obedience of faith:  To God only wise, be glory through Yahshua Christ for ever. Amen.

In Psalm 71 we read about the wonderful power and all-encompassing protection of God over His people:


Psalm 71-1-5 "In Thee, O Yahweh, do I put my trust: let me never be put to confusion. Deliver me in Thy righteousness, and cause me to escape: incline Thine Ear unto me, and save me. Be Thou my strong Habitation, whereunto I may continually resort: Thou  hast given commandment to save me; for Thou art my rock and my fortress. Deliver me, O my God, out of the hand of the wicked, out of the hand of the unrighteous and cruel man. For Thou art my hope, O Yahweh God: Thou art my trust from my youth."

Reading this passage at first makes some Christians' experience unexplainable.  For example, consider the amazing story of Jim Elliot, Nate Saint, and the other three dedicated missionaries who were martyred by the Indians of Ecuador. Where was Almighty God's protection when the savage natives speared His faithful missionaries to death?

Amazingly, God's protection was with them - even in allowing them to die! Job once said, "Tho He slay me, yet will I trust in Him," (Job 13:15). What is it about God, His Goodness, and His unfailing Protection that caused Job to say this? Clearly, this is the key that also inspired the five missionaries to Ecuador to willingly lay down their lives.

The reason these people could trust God so much, even to the point of death, was that they knew that He would only allow something to come to them, if He deemed it good (Romans 8:28)! Precious in the Sight of Yahweh is the life and death of His saints (Psalm 116:15). God does not lightly allow His children to die. But, when He knows that their death will bring about good - salvation - to another, then and only then can his people be martyred.

This is why Job trusted in God completely. This is why Jim Elliot, Nate Saint and their fellow martyred missionaries trusted in God completely. And this is why the wives, families and children of those martyred men were able to return and touch the lives of the very ones who had murdered the missionaries. As you watch the above videos about them, you will see the Hand of God - and yes, even His Protecting power in the whole story. God never withdrew His protection from His people - He extended His protection over the heathens also. And as a result, all of them - former heather murderers and martyred missionaries - will enjoy Eternity together.