Today we will conclude our 4-day "Unwrapping Christmas" segment. Fittingly, from today's Scripture reading, Psalm 137 is quite an appropriate conclusion for all of us Christians who have participated in Christmas - which is Babylonian sun-worship:

Psalm 137:1-4 "By the rivers of Babylon, there we sat down, yea, we wept, when we remembered Zion (God's people were in Babylonian captivity). We hanged our harps upon the willows in the midst thereof (this is a Hebrew symbol of great mourning). For there they that carried us away captive required of us a song; and they that wasted us required of us mirth, saying, Sing us one of the songs of Zion. How shall we sing Yahweh's song in a strange (pagan) land?"


So how did that clearly pagan practice of keeping Tammuz's December 25 birthday become observed by Christians?


By the 4th Century, the Catholic church, had incorporated the pagan practices associated with the winter solstice and December 25 into the church. This was done by emperor Constantine, at his infamous Council of Nicea in 325 AD. Constantine was the first pope and founded the Catholic Church after his "conversion" to Christianity.


In fact, Constantine’s supposed conversion to Christianity wasn’t a true conversion at all. Rather he effectively put the worship of Yahweh and pagan practices through a great universal meat grinder creating a religion that included aspects of them all. 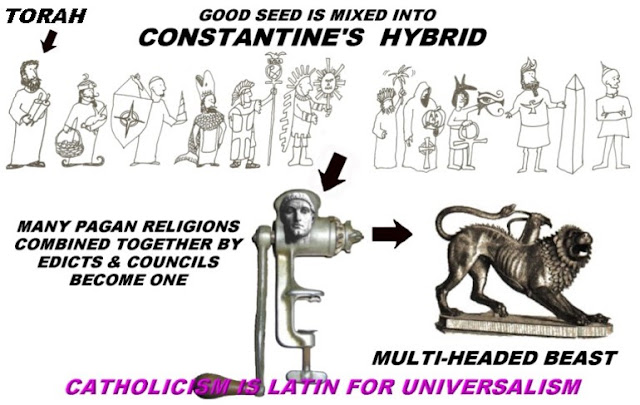 Constantine’s supposed conversion was the proverbial front page news of his day. But, he hadn’t really changed from his true pagan beliefs. In fact, Constantine was a worshipper of Mithras (who was called Tammuz, in ancient Babylon) until the day he died. As evidence of this fact, consider the following coin, which Constantine commanded to be minted. 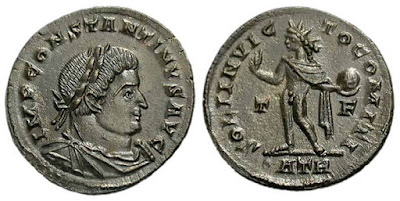 This coin was minted after Constantine’s conversion. It shows Constantine on one side, and the sun god on the other. The inscription reads: “Committed to the Invincible Sun God Mithras”.

Considering where Constantine’s true loyalties lay, it is no real surprise that he brought the celebration of Mithras’ birth into the church.  Here it was quickly Christianized, renaming Mithras as Jesus. But, all the old pagan practices remained, and the day itself was a day well-known among the pagan world as being the birth day of the original anti-Christ.

To this day, the Christian façade surrounding the papal organization, is but thinly veiled paganism. It was Constantine’s assertion that the pagan practices had become sanctified by being adopted into the church. As John Henry Newman explained in 1878:

“The use of temples and those dedicated to particular saints, and ornamented on occasion with branches of trees (wreaths), incense, lamps, candles, votive offerings on recovering from illnesses, holy water, holy days and seasons (the entire Church calendar), use of calendars, processions, blessings on the fields, sacerdotal vestments, the ring in marriage, chants, the Kyrie Eleison — are all of Pagan origin, and sanctified by adoption into the Church.” (John Henry Newman, The Essay on the Development of Christian Doctrine)

Up until this time, the birth day of Yahshua, the true Messiah, had not been specifically celebrated by the Christian church. Yet, it was believed that He would be born at Tabernacles – the annual holy time prophetically pointing to God dwelling with man.

Tabernacles takes place in the fall, in the Northern hemisphere. In fact, it is the last time when shepherds can be found on the hills of Judea tending their flocks by night.  Due to the cold, Bible times shepherds kept their flocks in sheepfolds throughout the months of December through February.

It is not too surprising that the sacred times of God were being replaced by pagan days through the efforts of the papal power.  This is the very thing the prophet Daniel warned us would happen in Daniel 7:25:

"And he (the Little Horn) shall speak words against the most High God, and shall wear out the saints (persecute) of the Most High, and think to change times of sacred feasts and holy days and the Law” (Daniel 7:25 – Amplified Bible). 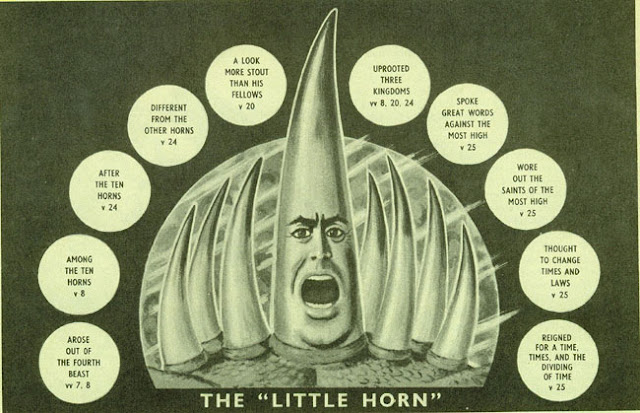 The ninth (of the ten) identifying characteristic of the Little Horn was that this power would change the Law of God and would replace His holy Days and worship times with pagan worship. This characteristic was fulfilled by emperor Constantine (founder of the Catholic Church) when he changed the Law of God, replaced Sabbath keeping with Sunday worship and removed the annual Sabbaths (listed in Leviticus 23), replacing them day-for-day with pagan days.

Knowing just how very pagan the traditions and practices of Christmas are, perhaps it is surprising that it has taken root among supposed Christian nations at all. Actually, the evolution of Christmas from the birth day of the son of the sun god into the birthday of the Son of God has been a long journey.

The first hints of Christmas to reach England came when Roman soldiers invaded Britain, bringing their pagan celebration of Saturnalia (the ancient Roman name for Christmas) with them. As it took root in England, Saturnalia came to be known as the Festival of Fools. 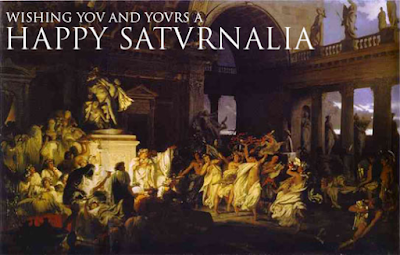 During the middle ages, the debased Mardi-Gras atmosphere of the celebration now called Christ’s Mass had reached an all-time low. Common practices included open sex in the streets, rioting, murder, and a variety of other very un-Christ-like behaviors.

In fact, there was very little difference between the obvious spirit behind Christ’s Mass and the spirit behind the pagan druidic practices associated with All Hallow’s Eve – or Halloween. 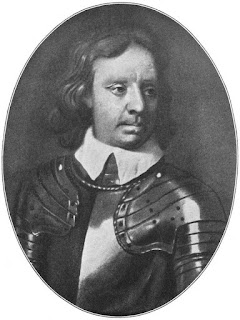 By 1652, this blood drenched, demonic celebration had gotten so out of hand that Christ’s Mass was finally outlawed in England.  A religious reform movement began sweeping the country, led by Puritan Oliver Cromwell (pictured on the left). Cromwell and the other Puritans firmly believed that Christianity must remain separate from paganism.

The public demand for this sanctioned debauchery was too great.  And the Puritans lost the fight to keep paganism out of Christianity in England. 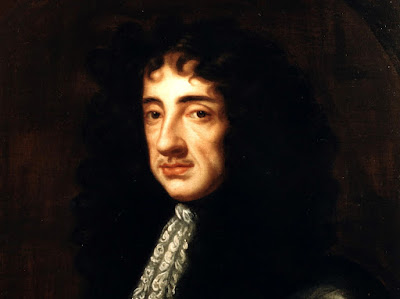 When Charles II became king of England, he legalized the keeping of Christ’s Mass as one means to get public support for his reign.

And the war over Christ’s Mass waged on with the tide of public opinion on the subject ebbing and flowing.

The Puritans had lost England, but they believed they could start fresh in a new and pure land called America. 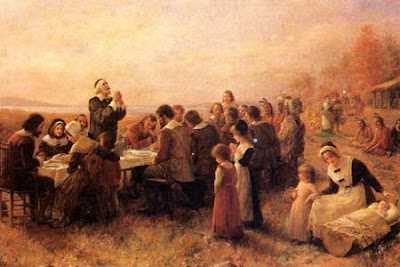 Like England, in 1659, the American colonies outlawed Christmas.  For 200 years, the early Americans fought to keep the pagan Christmas celebration out of the new land.

Sadly, the public’s taste for sin, resulted in gang rioting during a Saturnalia celebration in 1828.  It got so bad that cities, like New York,

were forced to form a police force, for the first time, in order to control the revelers. The first police force  (in New York, pictured on the right) was formed to deal with Christmas reveling!

The early support for Christmas had waned a bit by the Victorian era. King George the first encouraged the custom of keeping Christmas and decorating a Christmas tree in Victorian England.

But in spite of the George’s encouragement, the practice of celebrating Christmas was still not widely accepted throughout England at this time.

However, when Queen Victoria lent Christmas her seal of approval the public reaction was quite dramatic. In 1848, the London Illustrated News, printed this famous engraving of Queen Victoria and her royal family beside a decorated Christmas tree. 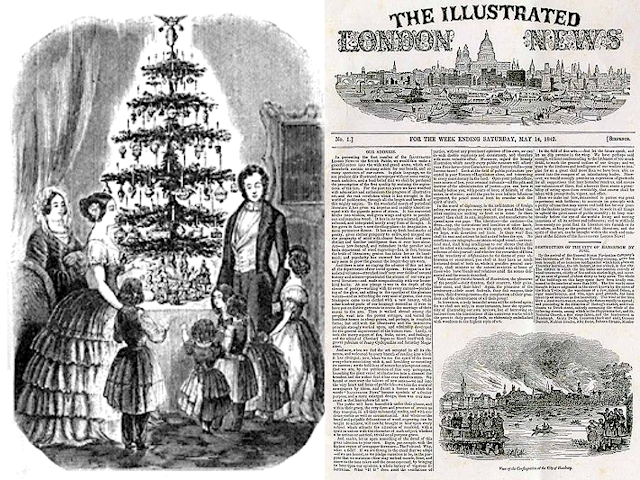 Within a few years, nearly every
home in England had their own Christmas tree in allegiance to the Queen they loved. Just as it was a German influence that brought Christmas to England, so it was through German settlers that Christmas first came to American soil.

By 1900, the U.S. forestry service estimated that only 1 in 5 homes had a Christmas tree. Clearly the majority of Christians were not keeping Christmas in America. Yet, the practice was gaining ground. 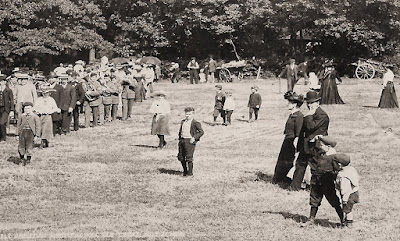 Christmas especially gained ground by the influence of the American Sunday School Society, who began advocating Christmas programs for children.  The society argued that the pagan roots of Christmas were unimportant. Rather, the season could be used to teach children about the birth of Christ through the reenactment of the Nativity. (Remember what "Nativity" means? It is the shortening of the Latin term "Natali Invicti Solas" which means the "birth of the invincible sun".) 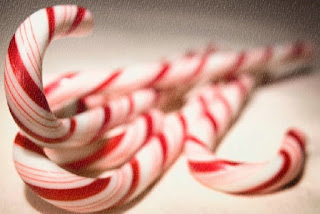 To sweeten the deal, the American Sunday School Society offered candy and treats to the children who participated.

The tactic worked, enticing families to overlook the blatantly pagan roots of Christmas, accepting the veneer of focusing on Christ’s birth.

But the most powerful influence which served to cement Christmas into the hearts of Americans forever was Charles Dickens book, The Christmas Carol. 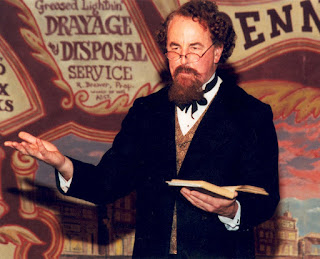 Coming to America in 1867, to promote his book, Dickens began to travel the country giving readings of his ghostly tale to cheering audiences.  The image of those who reject Christmas as Scrooge was firmly in place. While the warmth of the Cratchet family and the love Dicken’s story associated with the pagan holiday were all too enticing.

The Christmas Carol gripped America and brought any efforts to stop the evolution of Christmas to a screeching halt.

Thus, by 1875, the Puritans had been beaten.  And Christmas came to be a firmly accepted American tradition.  By 1890, all states of the Union had voted to recognize Christmas as a legal holiday.

But how does God look on this mixing of the pagan with the sacred?


After having unwrapped the true spirit of Christmas, perhaps we all need to do some serious soul searching. The worship of Yahweh is supposed to be about what pleases Him. And following along with the devil’s plan to replace the worship of the true God with paganism, many Christians have kept Christmas. Yet this day is just as demonic as Halloween.  And in the keeping of December 25, is it Yahshua who receives our adoration? No! December 25 is about Tammuz and Mithras, the false Messiah.


It is time we asked ourselves seriously which Messiah we are honoring. Just what Gospel are you living by friend?  If it hasn’t been the Gospel of the true Christ, it is my prayer that you will repent and join me in setting aside all traces of paganism that we may be pure and undefiled presenting a worship to our King that brings Him glory. If you are ready to put away Christmas forever, would you please bow your head and make that commitment to your Saviour just now?