Zechariah's first vision was part of our Bible reading for today. Zechariah's visions are all significant as end-time prophecies. For this reason, over the next few days, we will study the visions of Zechariah in this blog. Let's begin with the amazing vision of the colored horses, the red horse of which stands among the myrtle trees before beginning his apocalyptic ride throughout the earth: 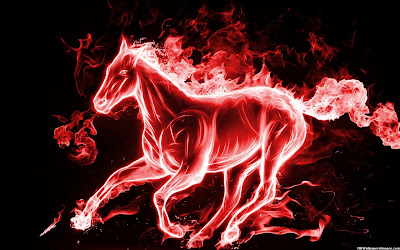 Zechariah 1:8-11 "I saw by night, and behold a man riding upon a red horse, and he stood among the myrtle trees that were in the bottom; and behind him were there red horses, speckled, and white.

Then said I, O my Sovereign, what are these? And the angel that talked with me said unto me, I will shew thee what these be.

And the man that stood among the myrtle trees answered and said, These are they whom Yahweh hath sent to walk to and fro through the earth.

And they answered the angel of Yahweh that stood among the myrtle trees, and said, We have walked to and fro through the earth, and, behold, all the earth sitteth still, and is at rest."

What does Zechariah see in his first vision? He sees a horseman riding a red horse. The red horse and rider are accompanied by other horses, which look like the ones John saw in Revelation 6.

In his vision, Zechariah sees the rider of the red horse dismount and stand among the myrtle trees in a low area. The angel identifies the horses as spirits sent from Yahweh to ride through the whole earth.

This vision of Zechariah is for the Last Days. How can we be certain of this? Both the red horse and myrtle trees are End-time prophetic symbols.

The fact that the red horseman is an End-time prophetic symbol is established in Revelation. The red horse and rider are the second among the apocalyptic horsemen of Revelation 6. This horseman rides with the opening of the second Seal, at the end of the world.


Revelation 6:3-4 "And when he had opened the second seal, I heard the second beast say, Come and see. And there went out another horse that was red: and power was given to him that sat thereon to take peace from the earth, and that they should kill one another: and there was given unto him a great sword." 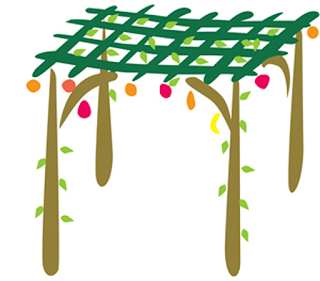 trees are an End-time prophetic symbol.

Isaiah 41:19-20  "I will plant in the wilderness the cedar, the shittah tree, and the myrtle, and the oil tree; I will set in the desert the fir tree, and the pine, and the box tree together: That they may see, and know, and consider, and understand together, that the Hand of Yahweh hath done this, and the Holy One of Israel hath created it."

Myrtle trees represent God's End-time saints, to whom He has made a special promise:

In this verse, we see that myrtle trees bring glory to Yahweh's Name. "Name" in Isaiah 55:13, is translated from the Hebrew word "shem", which means "mark, character, authority" or "seal". This group of people are called "an everlasting sign" that is never cut off.

From all of these prophetic characteristics of the End-time myrtle trees, we may plainly see that these trees represent the 144,000. This special group of saints are the ones whom Yahweh will hold up to the universe and say, "Here are they that keep the Commandments of God and have the faith of Yahshua," (Revelation 14:12).

The 144,000 are the people of God who will vindicate Yahweh's maligned Character. These "myrtle trees" will show the world that the Law of Yahweh can be lived out in a holy life, by the Power and Grace of God.

Having identified the two key symbols of Zechariah's first vision (the red horse is the horsemen from the second seal of Revelation 6 and the myrtle trees are the 144,000), we are now ready to look at the meaning of this vision. What is meant by the placement of the myrtle trees in the "bottom" in Zechariah 1:8?


Zechariah 1:8 "I saw by night, and behold a man riding upon a red horse, and he stood among the myrtle trees that were in the bottom; and behind him were there red horses, speckled, and white."

The word "bottom", which is the location of the myrtle trees in this first vision, is translated from the Hebrew word metsullah, which means "shade" and is from the root word which means the time when it "begins to be dark".

Shadows of the evening are a term used to prophetically symbolize a warning of impending doom - a time when the "dark clouds" of war, trouble, and persecution are gathering, but the "rain" has not yet started.


Jeremiah 6:2-4 "I have likened the daughter of Zion to a comely and delicate woman. The shepherds with their flocks shall come unto her; they shall pitch their tents against her round about; they shall feed every one in his place. Prepare ye war against her; arise, and let us go up at noon. Woe unto us! for the day goeth away, for the shadows of the evening are stretched out."

The fact that the myrtle trees are in the "bottom" at the time of Zechariah's first vision gives us a vital key to understanding this prophecy. Just before the final Time of Trouble, there will be a special prophetic message intended for Yahweh's 144,000. But what is the message? To understand this part, we need to examine the red horse and rider.

As we have already seen, according to Revelation 6, the Red Horse and Rider is released and rides through the earth in the Second Seal.

In Revelation 6, this red horse and rider run throughout the whole earth. But in Zechariah's first vision, the red horseman appears to Yahweh's people before he begins his official "ride" (which is when he brings a sword of war and takes peace from the earth). We may know that this first vision of Zechariah takes place before the Revelation 6 ride because the horseman is seen running throughout the earth later - as is recorded in Zechariah 6:1-7.

The main work of this red horse and rider is given in Revelation 6:4. He brings a sword (representing war and persecution - Jeremiah 30:7) and he takes "peace from the earth". Taking peace from the earth doesn't just indicate war, it also indicates the loss of Eternal Life.

According to Psalm 37:37, "peace" represents Eternal Peace - which is Eternal Life, promised to all who receive the Seal of Yahweh.


Psalm 37:37 "Mark the perfect man, and behold the upright: for the end of that man is peace."

But, before he begins to do this sobering work, the rider of the red horse is found standing in the shadows (just before it all begins) as a warning to the people of Yahweh. Zechariah's first vision contains a promise: the terrible season of persecution and Mark of the Beast will not begin until the people of Yahweh have first been warned.

Before literal Jerusalem fell and the city was sacked, Yahweh warned His true followers, so that they would flee - and thus escape - what was coming. The faithful obeyed the warning and fled. Many did not heed the warning, and there was no protection for the disobedient and unwatchful. The number who died was so great, that history records "rivers" of blood in the destroyed city.

Obviously then, being able to discern the warning is vitally important! What will it look like when the red horse man really stands among the myrtle trees in the Last Days? In plain English, what is the sign of coming persecution? To answer this, we need to look at our Saviour's Words, for He (and Daniel) gave us the sign to look for:


Matthew 24:15-16  "When ye therefore shall see the abomination of desolation, spoken of by Daniel the prophet, stand in the holy place, (whoso readeth, let him understand:) Then let them which be in Judaea flee into the mountains."

Mrytle trees! Alert! Zechariah's first vision is a strong reminder to be watchful and on guard. We must not miss discerning the moment when the red horse stands among the myrtle trees!
at August 15, 2017 No comments: