Why I Wrote the Book

A Word from the Author - Why did I write the book Escaping From the Dragon's Jaws? 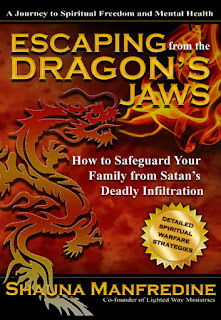 Writing this story is one of the hardest things I have ever done. It is a story I never intended to fully tell. My plan to keep it to myself was defensive. I was protecting myself from having to “rehash” powerful or painful memories. I was also guarding the reputations of those involved. And honestly, my silence was even accommodating the sensitivities of my fellow Christians, most of whom refuse to believe that committed followers of Messiah can be demonized, attacked, or deceived, to the degree which I was.

This belief is often voiced in a question, “Can the devil really get someone who prays, loves the Heavenly Father, and desires to serve Him wholeheartedly?” The very idea breeds deep fear in even the most stalwart of souls. For it leads us to worry that if the devil can get the truly committed Christians, no one is safe!

Now let me say up front that, of course, our Heavenly King is stronger than the devil! And there is no question that He can set the captives free (Isaiah 49:24-25). The truth of this promise is amply demonstrated in this book. But because many Christians have serious misconceptions about witchcraft, it is very possible, even commonplace for them to become the deceived “prey of the terrible.”


Shall the prey be taken from the mighty, or the lawful captive delivered?  But thus saith the Lord,Even the captives of the mighty shall be taken away, and the prey of the terrible shall be delivered: for I will contend with him that contendeth with thee, and I will save thy children. Isaiah 49:24-25

The fact that such deception is all too common among Christians was made clear to me, in part, by Rebecca Brown (author of Becoming a Vessel of Honor and He Came to Set the Captives Free). Rebecca informed me that her office has received numerous calls from distressed souls seeking help in the area of spiritual warfare and witchcraft. I was alarmed to learn of many committed Christians who unwittingly have become involved in what I call “Christianized” witchcraft, because they did not recognize it for what it was.

Compelled that my reasons for silence were outweighed by the “greater good” of warning my fellow believers, I have prayerfully decided to not only tell my story, but to write it for those beyond my personal sphere of influence. I will consider it well worth the effort, pain, and expense of sharing my story if so doing will help even one disciple of Christ avoid the pit which nearly destroyed me. We cannot afford to be “ignorant of the devil’s devices” or he will “gain the advantage” over us, 2 Corinthians 2:11.

May you be enlightened, spiritually strengthened and ultimately blessed as you read Escaping From the Dragon's Jaws. And may the Heavenly Father receive all the glory! Truly He loves His children! I am a living witness to the testimony that God’s Hand is not shortened that it cannot save; nor is His Ear heavy that He cannot hear our cries. In fact, before I even knew to call upon Him, He had already answered!

It should be stated, up front, that this book is written in a completely blunt and honest manner. The details given are exactly as I remember them, recorded faithfully, with no regard for my personal reputation. The pursuit of truth and strengthening the Body of Christ is far more important than having people think well of me.

My commitment to truth, demonstrated in my complete lack of regard for “keeping up appearances,” should be readily apparent in these pages. For I am sharing the facts of my testimony and the story of God’s Deliverance in my life, without hiding details that make me very vulnerable and open to criticism. These facts should be pointed out, because the enemy will want to prejudice you against the testimony shared in this book.

In order to keep Christians vulnerable to “Christianized” witchcraft, the enemy has fed God’s people a deep lie: “the devil can’t ‘get’ fully committed Christians. Only people who are hypocrites can be spiritually taken down by his deceptions.” But, this belief goes against Scripture, thus exposing it as a demonic deception. Consider the Saviour’s warning about how overmastering would be the devil’s deception - Matthew 24:24.

For there shall arise false Christs, and false prophets, and shall show great signs and wonders; insomuch that, if it were possible, they shall deceive the very elect, Matthew 24:24.

False christs and false prophets will appear, and they will offer great signs and wonders in order to deceive, if possible, even those whom God has chosen, Matthew 24:24 (CEB)


Deception of this magnitude did overtake me, and it wasn’t due to a lack of commitment to God. I became deceived because I was expecting witchcraft to look like chicken bones, tarot cards and Ouija boards – but it came to me in deceptive ways which appeared “righteous” at the time.

The last point I wish to make, in this introduction, is regarding “Adrianne,” herself. Adrianne (not her real name, of course) is a soul for whom Christ died. Nowhere in this book, or in my recollections of these experiences, do I hate her, nor am I bitter towards her for what took place. As the Bible tells us in Ephesians 6:12, our enemy is never human – we are in a fight against Satan and his demons. This is why it is so vitally important that we learn to discern the true enemy, recognize his purposes, and become equipped to effectively do battle with the forces of spiritual darkness - in the Power of God and with His Heavenly Weapons.

(Escaping From the Dragon's Jaws, Introduction)
at August 16, 2016 No comments: