Today, continuing our reading and study in Zechariah, we will look at his second and third visions.

What does Zechariah see in his second vision? (Zechariah 1:18-21)
Who are the Four Horns?

Daniel 7:24   “And the ten horns out of this kingdom are ten kings that shall arise...”

So, these four horns represent four political powers, which are specifically coming to "scatter" Israel and Jerusalem. 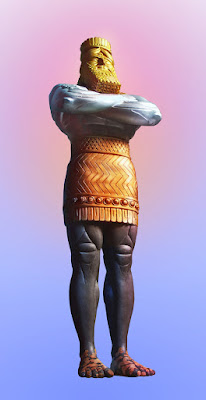 The four political powers who took Israel captive are represented in the image of Daniel 2 and the beasts of Daniel 7.  They are:

The head of gold represented the kingdom of Babylon (Daniel2:38).

The chest and arms of silver represented the next kingdom, which history bears out was Medo Persia.

The waist and loins of brass represented the third world-dominating kingdom, which we know to have been ancient Greece.

The fourth world-dominating kingdom, which was in power in Christ’s day, was pagan Rome. 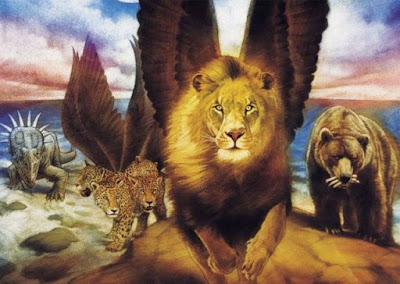 These four powers are represented as beasts in Daniel 7.

The first beast is a lion with eagle's wings (Daniel 7:4).  It represented Babylon.

Then came the bear  raised up on one side and with 3 ribs in its mouth.  It represented Medo-Persia which destroyed three kingdoms in its rise to power (Daniel 7:5).

Then came the leopard with four heads and wings. (Daniel 7:6). This beast represented Alexander the Great, who conquered with lightning speed (four wings) and was succeeded by four generals who divided the rule of Greece at his untimely death.

Last came a terrible beast with iron teeth and ten horns.  Out of the horns comes up the Little Horn, which claims to be God and is blasphemous.  This last beast represents pagan Rome (Daniel 7:7-8), which was the globally dominant power in the days of Christ.

Since all of these four political powers are past, why would Zechariah’s End-time vision be about them? 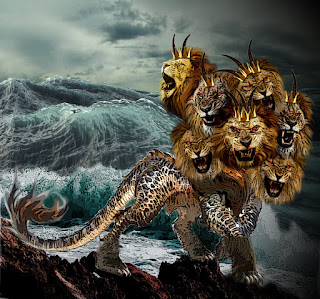 The beast of Revelation 13:2-3 is an amalgamation of all these four beasts from Daniel 7.  This beast is run with the brains of Babylon, the might of Persia, the conquering speed of Greece, and the crushing strength of Rome.  Its power comes from the dragon (who is Satan himself - Revelation 12:9).

Clearly, the ancient ideologies are still present at the end of the world, even though their former kingdoms have passed away. In fact, in the end, the beasts are actually used to represent  the political powers which they symbolize.

For example, the lion with eagle's wings represents the 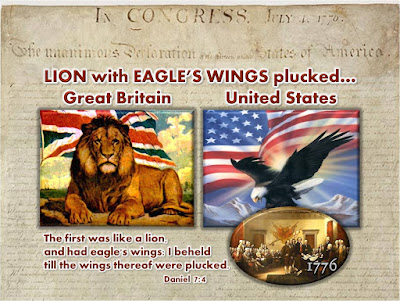 coalition between England (which is represented by the lion) and the United States (which is represented by the eagle's wings). This "special relationship" has been the globally dominating power since the time of WWII. Notably, this was the first beast of Daniel 7, in its final manifestation. And it is the first of the four horns from Zechariah's second vision, which is going to "scatter" the people of God in the last days. 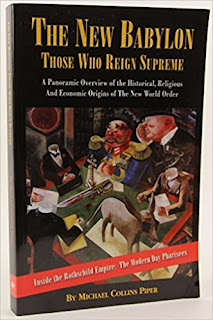 Notably also, these two joined powers are forming the new Babylon - bringing back the old Babylonian system, which includes its false religion. This point is well-documented in Michael Collins Piper's book The New Babylon, and in several other such books.

In the final round, Russia is the bear, and the three Baltic States which it consumed in its rise to power are the three ribs in its mouth.

The leopard symbolizes the new Ottoman Empire, which is the Muslim power working to bring back the old Caliphate. Once this is accomplished, this leopard-beast will be fully formed. The four heads of the leopard represent the four Rashidun Caliphs. And the wings of the beast are rooster-wings, which represents the power of France (which is represented by the rooster), which will be used by this leopard to help swiftly dominate.

Finally, the dragon-like fourth beast is the perfect picture of China, which is represented by that symbol.  China is the Globalists ideal for the New World Order. Its political structure under Chairman Mao has been called the "litmus test" of the New World Order. In Zechariah's second vision, this is the fourth and most terrible of the horns.


Zechariah 1:18-21  "Then lifted I up mine eyes, and saw, and behold four horns. And I said unto the angel that talked with me, What be these? And he answered me, These are the horns which have scattered Judah, Israel, and Jerusalem. And Yahweh showed me four carpenters. Then said I, What come these to do? And he spake, saying, These are the horns which have scattered Judah, so that no man did lift up his head: but these are come to fray them, to cast out the horns of the Gentiles, which lifted up their horn over the land of Judah to scatter it."

The reference to these four horns "scattering" God's people means that these powers will persecute them and cause them to flee. This is something Scripture tells us will take place in the final 1260-day timeline:

What are the four carpenters of Zechariah’s second vision going to do to the four horns? Zechariah says that the carpenters will "fray" the persecuting horns.

The word "fray" in Zechariah 1:21 is translated from the Hebrew word charad and means to "cause to tremble with fear". The idea that the powers of the wicked will be terrified is also shown in Matthew:

Matthew 21:26   “Men's hearts failing them for fear, and for looking after those things which are coming on the earth: for the powers of heaven shall be shaken.”

Since the four beasts of Daniel 7 are also the four horns of Zechariah's second vision - and since these four beasts join together to form the final beast of Revelation, we see a promise in this vision that Yahweh is going to use his "carpenters" to defeat the beast, causing it to be completely terrified at the Power and Judgments of the Almighty. Who are the carpenters who scare the beast?

The word “carpenters” means "workers". Yahweh sends His messengers to do His work in delivering a terrifying message to the beast.  These workers are Yahweh's people - His final Elijah Team, who give the Message of Elijah in the Last Days. Also known as the Message of the Fourth Angel, this message which terrifies the Beast at the end of the world is found in Revelation 18:1-5:

Revelation 18:1-5  "And after these things I saw another angel come down from Heaven, having great power; and the earth was lightened with his glory. And he cried mightily with a strong voice, saying, Babylon the great is fallen, is fallen, and is become the habitation of devils, and the hold of every foul spirit, and a cage of every unclean and hateful bird. For all nations have drunk of the wine of the wrath of her fornication, and the kings of the earth have committed fornication with her, and the merchants of the earth are waxed rich through the abundance of her delicacies. And I heard another voice from Heaven, saying, Come out of her, My people, that ye be not partakers of her sins, and that ye receive not of her plagues.  For her sins have reached unto heaven, and God hath remembered her iniquities."

Now, let's turn our attention to Zechariah's third vision, which is the one we read today in Zechariah 2.

What did Zechariah See in his Third Vision? (Zechariah 2:1-2) What does Jerusalem symbolize?

So, in the third vision of Zechariah, we see a process of "measurement" going on. It is from this measurement that it will be determined who is the Jerusalem that will be saved from the Fire. Measurement is a symbol of Judgment. People are "measured" against a "standard" to see how they measure up.

What is measured in Zechariah’s 3rd Vision? (Zech 2:1-2, Isaiah 64:6, Job 29:14, Isaiah 61:10) Our spiritual "garments" are being measured. The Bride of Messiah cannot be clothed in her own character robes, which are filthy rags. She must be clothed in Yahshua's Righteousness, which is the Wedding Garment of the saved.

Who will receive this special clothing? (Rev. 3:5) “He that overcometh” through Christ’s power over EVERY besetting sin, will be clothed in the White Robe, at last.

What is the significance of the order of these visions in Jerusalem being measured (judged) first? (1 Peter 4:17) “Judgment must begin at the House of God”. Thus, we see that the "measurement" of Jerusalem (God's professing people) will happen before the world is measured.
By what Standard are we measured? In other words, what is symbolized by the measuring line in Zechariah’s 3rd vision?


In Psalm 19, David extolled the virtues of the Law of God, listing its parts: commandments, statutes, judgments, testimony:

Psalm 19:7-10    "The Law of Yahweh is perfect, converting the soul: the testimony of Yahweh is sure, making wise the simple. The statutes of Yahweh are right, rejoicing the heart: the commandment of Yahweh is pure, enlightening the eyes. The fear of Yahweh is clean, enduring for ever: the judgments of Yahweh are true and righteous altogether. More to be desired are they than gold, yea, than much fine gold: sweeter also than honey and the honeycomb."

As David explains, the Law of God converts the soul!
Then he breaks down the parts listing first the Commandment, which he says are “right” and bring joy to the heart. Next David says that the Statutes of Yahweh are pure, enlightening the eyes (giving wisdom).

What is the Message of Zechariah’s 3rd Vision?

Judgment is coming. It comes first to the people who claim to belong to Yahweh. We are to be judged by the Standard of the Law. By God's Indwelling Grace, our lives must reflect the Standard of the Torah, just as Christ’s own life did. For those who do not measure up, their house is left unto them desolate, meaning that the Holy Spirit is not dwelling within.

In the end, the father who claims us (whether Yahweh or Satan) will be the one we look like in character, not the one to which we pay lip service.